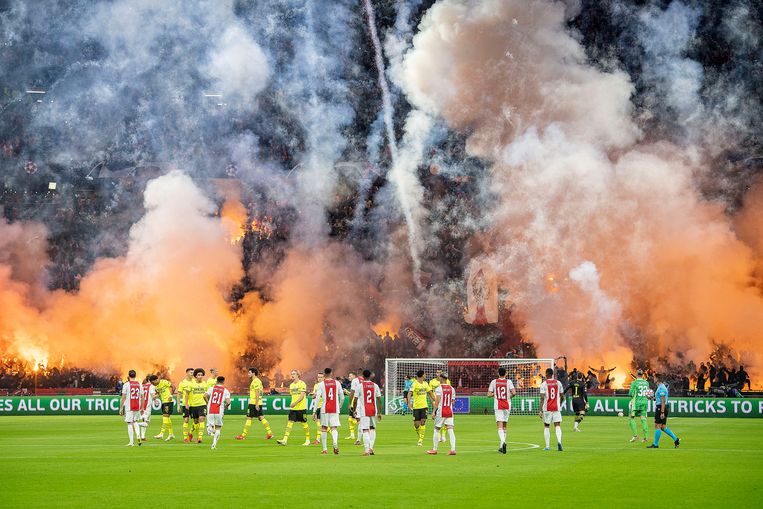 You were pretty frantic in your match report. You wrote about ‘football that should have lasted forever’. And: ‘Ajax was the confetti machine that almost gave the stadium hallucinations’. Are you back on Earth already?

Yes, I’ll write a little over the top sometimes. But that is also possible, every now and then. Yesterday you saw football that you hardly ever see, certainly not in the Netherlands. You have to be able to distinguish when something is very special and when it is not. We are quick to say: if we are not good ourselves it is our fault, if we are good the opponent is bad. Every now and then you also have to be able to enjoy it.’

What does yesterday’s match say about Ajax’s form?

“It’s very good, actually all season. They focused on being good at the start of the Champions League in their training sessions. The main goal is to make it to the knockout stage after failing two years in a row. They played great against Sporting Lisbon last month and won 5-1. They were very good against Beşiktaş in the first half, and less so in the second. Yesterday they also kept the high level in the second half. Then you see what this team is capable of.

“You never know if it’s good enough to beat the real top teams. Dortmund do have a good team that reached the quarterfinals last year, but it is European sub-top. And there is still plenty to criticize at Ajax: they miss many opportunities and are occasionally sloppy in defense, they sometimes lose the ball quickly. Time will tell what this team is worth against a club like Manchester City or Real Madrid.”

Is that good form exceptional, or comparable to the past few years?

‘It’s still hard to say. Over the past two years, Ajax was eliminated in a rather clumsy way in the group stage of the Champions League. Last year, among other things, by giving away a 2-0 lead against Atalanta and the year before by playing a draw against Chelsea after two red cards against.

“The only comparison you can draw is with the 2018-2019 season, when Ajax reached the semi-finals and beat Real Madrid 4-1, among other things. They are now doing better in the group stage than they were then, but the knockout stage is more important. And it won’t start until February next year. For the same money, two important players are injured, or sold, and everything is different.

“Yesterday’s game wasn’t extremely important either. If Ajax had lost, they still had a good chance of making it to the second round. Although an Ajax supporter who will later, sitting in a chair in a retirement home, think back to the beautiful matches of his club, will never forget yesterday’s.’

You were not the only one lyrical, that also applied to many foreign newspapers. The Italian Gazetta dello Sport talked about an ‘unstoppable Ajax’. What is the status of the club outside the Netherlands?

“I don’t think it is assumed that Ajax will win the Champions League, but they are highly appreciated. One wonders how Ajax keeps getting such a good team when they have to sell more than half of their players – something Real Madrid or Manchester City never have to do.

‘They see that Matthijs de Ligt has been sold for 75 million, and that the relatively unknown Jurriën Timber who is there now is doing even better. The 19-year-old Ryan Gravenberch is better than Frenkie de Jong at that age. The great thing is that they form a real team. Yesterday everyone was just fine, that hardly ever happens.’

How does the trainer manage that?

‘Don’t make that too romantic either. About four years ago, when Erik ten Hag started as a trainer, Ajax said: we want to join the European top, and that is only possible if we bring our talents together with experienced top players.

“Then they got Daley Blind and Dusan Tadic, and for that they had to raise salaries substantially. The highest earning players of Ajax are on annual salaries of 4 to 5 million euros, which you did not see in the Netherlands before. If things go badly, Ajax will get that back like a boomerang: ridiculous, such salaries, people say. But now things are going well.

‘I have always written that a Dutch club will never win the Champions League again. But the only way it could be is if a unique group of self-trained talents is complemented by top players from outside. Now the situation is ideal. Take Antony, they scouted him in Brazil and took over for 20 million euros, a lot of money, and that turns out to be a world topper. They will resell it for tens of millions of euros more.’

On Sunday Ajax will play against PSV. Should he face this match with fear and trembling?

‘PSV will come to the Arena with some nerves, but that is a completely different game. Dortmund wanted to attack and therefore gave away a lot of space. PSV will undoubtedly take a more defensive position and try to score from the counter. Then they can just take a point or win, although I don’t think that chance is that great. Every match is different: yesterday’s game deserves applause, now it’s time to return to the order of the day.’