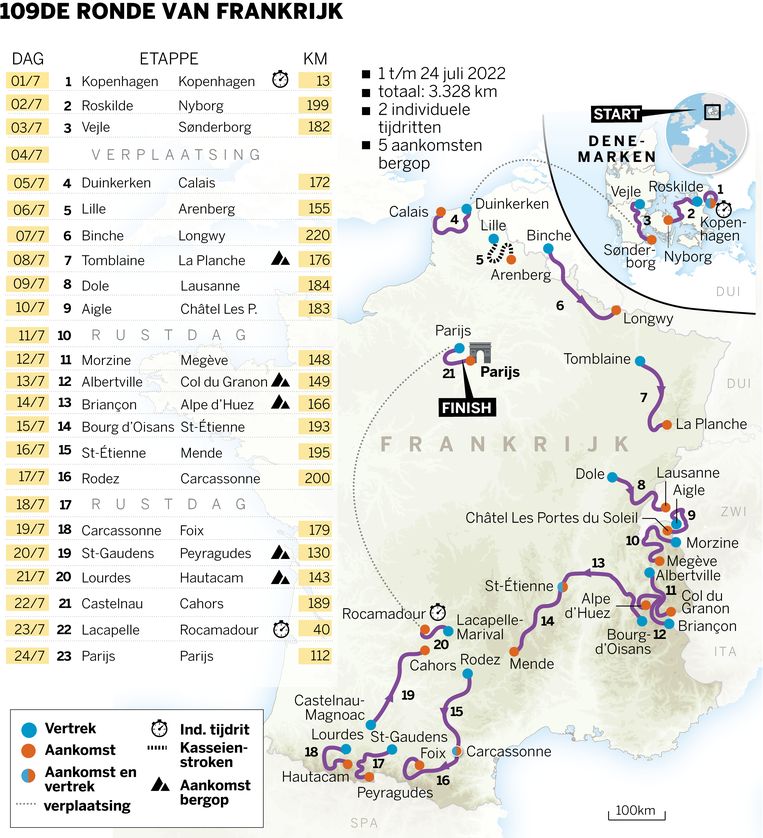 The findings of course designer Thierry Gouvenou guarantee even more battle, his boss said. Duels, elbow to elbow, revenge. Prudhomme speaks of descents where the riders will plunge down, open areas where the wind will blow them off their bikes into the Baltic Sea and eleven cobblestone sections ‘of which no fewer than five have never been included in the Paris-Roubaix cycling monument’. Why not, he didn’t say.

The Tour director also said that he was counting on massive public interest, while at the same time in Brest the woman with the Allez Opi-Omi! sign was heard demanding four months’ probation. That was because of the injuries she caused to part of the pack by standing on the road with that piece of cardboard and her back to the riders. The verdict is on December 9.

Spectacle, I’m looking forward to that, said world champion Julian Alaphilippe, who tried to thwart the riders’ protest against the inadequate safety measures last year. ‘The first week in particular will be beautiful.’ He was referring to the cobblestones in stage 5 and the expected wind that will cause fans in the first stages in Denmark – never did the Tour start as north as in Copenhagen on July 1, 2022 – a Friday where Saturday is usual.

With six flat stages, there are fewer chances for a historic record, noted sprinter Mark Cavendish, who shares the record of 34 Tour stages won with legend Eddy Merckx and is aiming for number 35.

There are not three, like last year, but five uphill finishes. With 29 cols more must be climbed in fewer mountain stages. The steep Vosges climb, Planche des Belles Filles, is back, this time in the super version with an unpaved section. The French national holiday is celebrated six days later with a very tough stage over the famous Alpine peaks of Galibier (with 2642 meters the roof of the Tour), Croix de Fer and finally the Alpe d’Huez.

After the last mountain stage, to Hautacam, on Thursday 21 July, just like in other years, a flat stage, a time trial of 40 kilometers and the sprint festival in Paris will follow. ‘This course has everything in it’, assessed 23-year-old Tadej Pogacar, who won the general, mountain and youth classification the last two times in Paris. “It’s going to be fun,” said the two-time winner of yellow, spheres and white. ‘But you can also lose this Tour in the first week.’