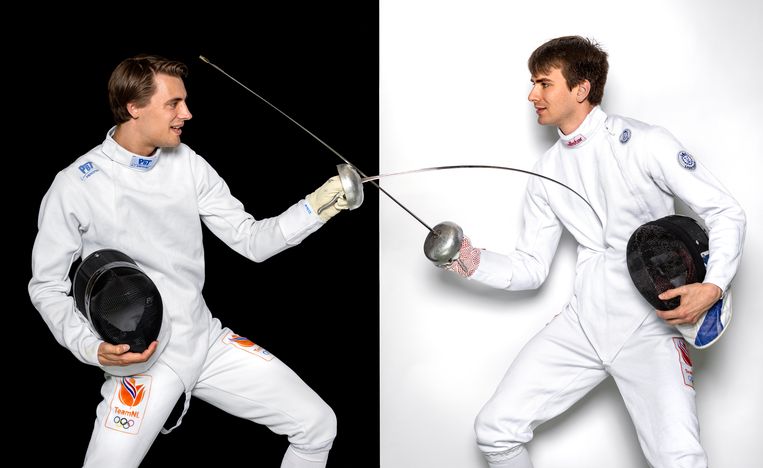 If you want to meet the best fencers in the Netherlands, ignore the Papendal exit. On the other side of Arnhem, almost 20 kilometers past the national top sports center in the woods, Tristan (31) and Rafaël Tulen (25) are working on their Olympic dream.

At fencing club Scaramouche, the brothers are each other’s trainers, because they do not have a coach. The Netherlands no longer has a national coach. Fencing is not a priority at sports umbrella organization NOCNSF, which only invests in sports with great medal chances. The Dutch fencing association has only one employee with director Teun Plantinga.

So the brothers figure everything out for themselves. After years of pioneering, this led to success for the eldest brother Tristan in June. With European silver, the first European Championship medal since Bas Verlijken’s silver in 2011, he is now participating in the international top. Thanks to the medal, Tulen secured an A status from NOCNSF with the accompanying stipend for the first time. In two years he hopes to follow in the footsteps of Verlijken in Paris, who ended his career after four Olympic Games.

Brother Rafaël, seven years younger, also won prizes at the European Championships in Antalya. After his early elimination as a contestant, he took home a coach award. He suddenly stood between the renowned national coaches of Switzerland and Italy. ‘That was funny,’ says Rafaël. ‘Do you walk there between men of 40 or 50. In the beginning they were still surprised that there was such a young trainer in the coaching profession. Now they know that we always coach each other.’

At international tournaments, the double role is rarely a problem. Tristan and Rafaël have never had to fence against each other in World Cup competitions. At national championships they always face each other, but then a coach on the side is less important. Usually Tristan wins. Raphael cannot mourn that for long. “Then I’m also doing something right, since I’m training him.”

During the training sessions it is a challenge to switch between the roles. To practice stitches, the trainer must wear a thick suit that can absorb the blows. So part of the time is spent being a living pad.

In order to be able to spar with other opponents, the brothers regularly travel abroad. They are often invited to Germany and Denmark. They often film the training sessions of their competitors there. They use the knowledge together in Arnhem. ‘Sometimes the Danes even pay our ticket because they like to train with us,’ says Tristan Tulen. ‘We then sleep in a teammate’s room and are allowed to train for a week. We have built up a large network over the years. We have to rely on that, because there isn’t much money for other things.’

In addition to his sport, Tristan works twenty hours a week as a physiotherapist, Rafaël studies nutrition and health in Wageningen. They also use the knowledge they gain in their work and studies for their fencing careers. Rafaël knows how to eat to perform optimally, Tristan how to deal with injuries.

The brothers still live at home, otherwise they cannot afford their sport. Father and mother Tulen also fence, as do two sisters who had great success in their youth. Tristan excited the rest. He came into contact with the sport at an event for students. Now he is setting aside 15 thousand euros a year for fencing. ‘The tickets to distant destinations are especially expensive. Next year we have to go to Cali, Vancouver and Buenos Aires for the World Cup competitions. Then you will be shocked if you have to buy another ticket of 2000 euros. My salary is almost entirely devoted to it. Fortunately, we now have a material sponsor. That makes a difference.’

To achieve his Olympic dream, Tristan must be one of the best 16 fencers in the world. He is currently in 25th place in the world rankings. Rafael is in 70th place. They prefer to go together, but the Netherlands is not good enough as a country to get a team ticket.

The gap with the absolute world top is still large. In the European Championship final, Tulen had no chance against the French global number two Yannick Borel with a defeat of 1-15. It is hoped for an invitation to come and spar with the competitors from the best fencing country in the world, which trains full-time in luxurious accommodations.

For the time being, it is mainly the blue eyes behind the black gauze of brother Rafaël that he sees. Although he can certainly learn something from him. ‘I just have a different style’, says the youngest brother Tulen. ‘I try to provoke people. If they come to me, I’ll hit them sooner.’

Tristan attacks more with iron. “When someone comes, I tap the weapon away and then I hit the opponent. Rafaël has more defensive actions, but he can also use them very cleverly offensively. That’s how we learn from each other.’

Fencing in the Netherlands
is top sport in the margins


With the silver European medal for epee fencer Tristan Tulen and the bronze for foil fencer Daniël Giacon in the World Cup, the director of the Dutch fencing association, Teun Plantinga, has something to celebrate again this year. After the retirement of four-time Olympian Bas Verwoonen, there is still hope for the runner. But the successes are incidental. Fencing remains a sport for pioneers, says Plantinga. ‘Without the support of NOCNSF, the financial possibilities for our athletes are limited. That situation has been like this for years. We figure out a lot ourselves and we don’t have full-time national coaches.’

It was once different, when a group of fencers trained centrally at Papendal. Fencing was one of the first sports to join the National Forest Training Center. Tristan Tulen was also part of that group in his youth. He went back to his club when there was no more room for fencers in Papendal.

Due to disappointing performance, the project was discontinued around 2010. ‘NOCNSF saw no point in it anymore because the performances lagged behind. But it turned out not to be ideal for us either. Young athletes sat together who sometimes had to move and pay a lot themselves, while the future prospects in this sport were not exactly profitable.’

Now the best fencers are training at clubs again. The most important position at the union is also a part-time job. Plantinga works one day a week as director for the fencing association. He shares office space in Nieuwegein with the table tennis, cricket and badminton associations.

To raise the level, the best Dutch sword fencers dream of an Olympic team ticket that would allow four instead of one fencer to go to the Games. The feasibility of such a team effort is small. The Netherlands must be one of the best eight screen countries in the world for this, but has been dangling around the thirtieth place for years, far behind major powers France, Italy and Korea.