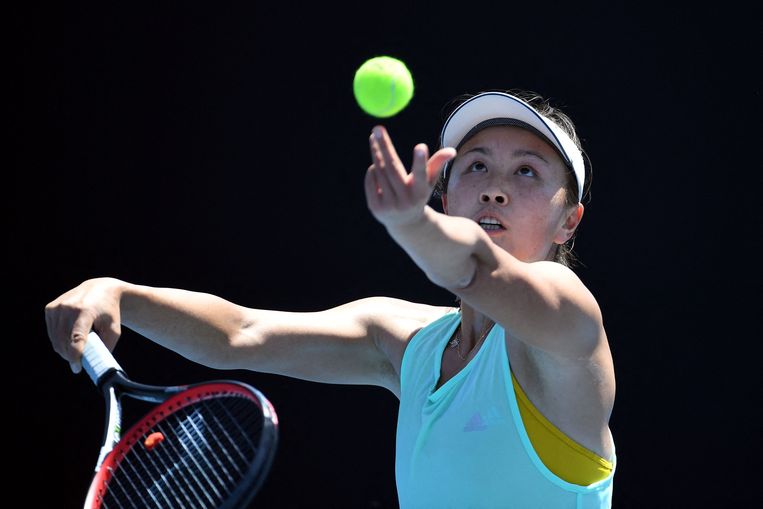 Will Steve Simon turn things around? Will December 1, 2022 later be known as the beginning of the end of the relationship that global sport maintains for financial reasons with countries that violate human rights?

In any case, the 66-year-old American boss of the women’s tennis association WTA decided to stand up to China that day and cancel all tennis tournaments there for the time being. It is a protest against the treatment of WTA member Peng Shuai, the 36-year-old Chinese doubles specialist. WTA boss Simon has been unsure of her fate since Peng accused an ex-party leader of sexual abuse. Unsure enough to cancel the WTA’s most lucrative business deal.

In recent years, Simon himself tempted China to organize numerous tennis tournaments, from which the WTA would earn an estimated 880 million euros. For the time being, that is the price tag that now hangs on the boycott of the WTA boss. ‘We now let things like money, business and politics dominate what is right or wrong.’ Simon says he wants to break that.

There is something to be negotiated with those pious words, for example, it is uncertain whether all those boycotted tournaments in China would continue next year due to corona. Yet the protest is a rarity. Not only does sport itself resist a dubious regime, there are also concrete and serious financial consequences.

Countries that are at the bottom of rankings for quality of life and human rights situation, such as Russia, Azerbaijan, Bahrain, UAE, Qatar, China and Saudi Arabia, to a declining degree of freedom, use sporting events to enhance or mask their reputation.

They follow examples such as Nazi Germany in 1936 (Olympic Games) and the Argentine junta in 1978 (World Cup), which hoped to win over the world community. The questionable regimes have something that sports federations seem to have such an insatiable need for: money.

Tournaments and events must always be bigger than the previous ones, while in Western countries in particular, public opinion is turning against the fortune that they cost. This is how China came to its upcoming Winter Games: Norway wanted to, but withdrew when the population protested against the money-consuming sports festival.

In the past fifteen years, hardly a major sporting event has been announced before a country with a questionable relationship with human rights has made an attempt to win it. Often with success. Take the World Cups in Russia and Qatar of the most popular sport in the world, football. World Swimming, Athletics and Judo Championships also often took place in controversial countries.

However, these are less and less often the places where major sports tournaments will be held in the coming years. While the ‘wrong’ countries continued to bid imperturbably in the Olympics, they will be held in France, Italy, the US and Australia until 2032 – the 2030 Winter Games have not yet been awarded.

Of the world’s ten largest sports, based on an estimated number of interested parties, a large part of the top tournaments in the coming years will take place in Western countries such as Canada, the US, Australia (World Cup football), France (rugby) and the Netherlands (women’s hockey). , volleyball women). India hosts World Cups in two major sports that are very popular with the population: cricket and hockey. The Philippines will be one of three hosting countries for the 2023 World Cup, the most popular sport in the Southeast Asian country.

In this light, WTA director Simon’s act seems to fit in with a trend that, with the much-criticized Winter Games in China and the World Cup in Qatar as lows, seems to be turning for the better next year in the form of a slow farewell. One where global sport is saying goodbye to countries with deep pockets, but a shabby freedom situation.

Sports professor Simon Chadwick sets The New York Times that the WTA has drawn a ‘red line’ with the withdrawal from China. According to Beijing-based sports analyst Mark Dreyer, the tennis association’s stance could turn out to be a watershed.

Can, because it is by no means certain. In the coming years, the world championships in judo, athletics and swimming will still be held in countries such as Qatar, Russia, Uzbekistan and Hungary. At the same time, the protest words do not lead to actions against the Olympic Games in China because of the government treatment of the Muslim Uyghurs and the World Cup in Qatar that had the necessary stadiums built at the expense of the lives of foreign construction workers.

And this weekend watch Max Verstappen try to win his first world title in Formula 1. He does that at a new race track in Saudi Arabia and the race there on Sunday is not a one-time misunderstanding. The Saudis signed a contract for no less than ten years with the F1 organization, after Qatar already did. With the regular races in Bahrain, Abu Dhabi, China, Russia and Azerbaijan, it becomes difficult to answer the question of whether Steve Simon’s step will turn things around with a ‘yes’. A bag of money is simply too tempting for sports administrators who hide behind the dubious adage that sports and politics should remain separate.