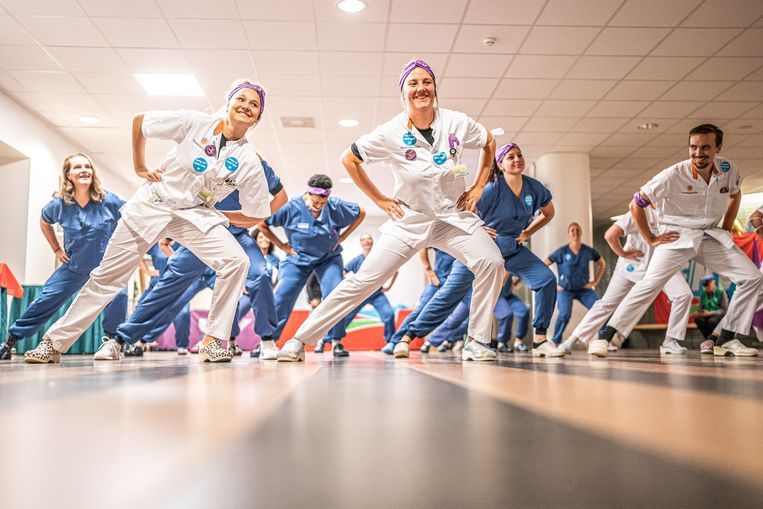 Despite the tight labor market and the economic recovery, there have been no significant wage increases so far. Will that change in the coming collective bargaining season?

To the moon – that’s how far employers are now going to recruit. And no, ‘you won’t space it’ assures the pizza chain that advertises it: the company is actually planning to catapult a pizza delivery person who will remain in service for at least four months next year and who achieves the highest customer satisfaction score with the first commercial flight into space. Accommodation costs included.

The company is not the only one trying to distinguish itself as the ‘coolest’ employer. Catering owners previously offered applicants free driving lessons and holidays to Ibiza. It underlines once again how dire the staff shortages are. The labor market has never been as tight as it is now: there are now five jobseekers against six vacancies. According to the employers’ association AWVN, 90 percent of employers are struggling with shortages.

However, it has not yet led to significant wage increases. The Central Bureau of Statistics (CBS) reported on Thursday that collectively negotiated wages could not keep up with inflation for the sixth time in ten years. Despite the rapid economic recovery, workers gained an average of 2.1 percent last year. Consumer prices rose 2.4 percent in the first eleven months of the year.

This can partly be explained by the pandemic: because collective agreements are concluded for a longer period of time, they react with a delay to the economic situation. But even when there seemed to be no coronavirus yet and the labor market was already under high tension, the union managed to extract ‘only’ 3 percent in the first quarter of 2020. Much less than the 5 percent the union bet on. According to the CBS, the share of corporate profits that went to employees has decreased by 0.2 percentage point since 2015.

Through the poverty line

According to professor of citizenship Monique Kremer, the consequence of these lagging wages is that people at the bottom of the labor market fall through the poverty line. For example, the number of working poor has increased by 60 percent since the beginning of this century. ‘Now the welfare state has to compensate the low incomes with allowances and taxes, but you actually want wages with which you can build up a life. And for most people that means house, tree, animal.’

According to professor of economic history Jan Luiten van Zanden, the fact that wages are only rising slowly is the result of a deeply rooted culture of wage moderation. ‘It goes all the way back to the reconstruction years. In order to strengthen the competitive position, there was a guided wage policy: the Minister of Social Affairs dictated the maximum wage margin and the social partners had to stick to it.’

When that was released in the early 1960s, it caused a major wage wave, which terrified employers forever. Because many collective labor agreements included an automatic link between wages and prices (apc), wage increases led to price increases, which in turn led to wage increases, and so on. The Netherlands was caught in a so-called wage price spiral. Van Zanden: ‘Due to the oil crisis, growth slowed and unemployment rose in the 1970s, while the wage price spiral continued for a while. Then you get stagflation.’

It weakened the competitive position to such an extent that the government threatened to intervene again. Unions and bosses subsequently decided in November 1982 to make voluntary agreements about wage moderation in the Wassenaar Agreement. The automatic linking of prices to inflation was abandoned, wage increases had to be fought for. Collectively negotiated wages have never increased by more than 5 percent per year since then.

The Wassenaar Agreement led to an increase in employment in the 1980s and 1990s, but according to Van Zanden, this is partly to blame for the shortage that has arisen. ‘Labour has become relatively so cheap that employers have not started saving on it. No activities have been divested or moved abroad, which means that there is now a shortage of labor everywhere.’

Tightness as a means of pressure?

Whether the resulting shortage will now be the means of pressure that will push up wages, labor market professor Ton Wilthagen of Tilburg University dares to doubt. The power of the union has been waning for years. Only one sixth of workers are union members (in the early 1980s this was still one third) and companies are increasingly doing business with alternative unions or the works council. According to scientific research, a less strong union can pull out less of the fire in negotiations.

Moreover, there is an alternative for people covered by the collective labor agreement: flex workers and self-employed persons. ‘If unions set too high demands, employers will do business with them immediately.’ Anyone who wants a hefty wage increase must therefore negotiate it as an individual with the employer. ‘Those who are strong on the labor market can get some extra bonuses in this way,’ says Wilthagen. ‘But the question is whether the pizza delivery guy who will soon be launched into space is also able to get a sky-high salary.’

There is another reason why employers cannot be expected to dig too deep into their pockets next year: they do not think that higher wages are a solution to the staff shortage. In a document in which employers’ association AWVN gave its vision this autumn on combating the staff shortage, wage increases were not mentioned at all. Incidentally, she also contradicts that wages would grow too little.

Professor Wilthagen has to agree with the bosses on the first point: higher wages alone will not counteract the acute staff shortages. ‘Because with more wages you don’t make more people. The fact that healthcare staff no longer want to work in IC is not only because they earn little, but because the working conditions are not right. That is why 40 percent of healthcare workers leave within two years.’

According to Professor Kremer, it is at least as important to combat staff shortages that the quality of work improves. In the advice to which she co-wrote as project leader at the Scientific Council for Government Policy at the end of 2019, she argued for less proliferation of flexible contracts and more participation for workers. At the time, together with the report of the Borstlap Committee, it was seen as the momentum for far-reaching reform of the labor market.

That moment was disrupted by the corona crisis, which only made companies more directive. And Van Zanden does not expect that we will be on the eve of major changes in the coming year either. ‘But history shows that there is always a solution for every problem, including wages. And if the inflation rate of 5 to 6 percent continues, there may be no other option but to go up the barricades.’

Bank employees get stuck on the zero line


It was with ‘pain in the stomach’ that the unions presented the laboriously negotiated result with employer ABN Amro to their supporters. Despite a net profit of 343 million in the third quarter of 2021, the bank wanted to put wages at zero for two years. The reason, according to the FD: inadequate interest income and increasing expenditure on, among other things, money laundering control. In addition to the disappointing wage offer, the unions also fell over the social plan with which the bank wants to cut 15 percent of the jobs.

Sports employees do grow with inflation

Automatic Price Compensation (APC) is back. That is to say: for the two thousand employees of local sports companies and petting zoos that fall under the small collective labor agreement Vermo. Last month they already received 750 euros gross bonus and this month a pay increase of 2.4 percent will be added. For the next three years, employers want to guarantee that wages will follow prices. As far as we know, this is the first collective labor agreement in which employers meet the wage demand that the FNV union has set since this autumn: automatic price compensation for everyone.

According to the union, it was the ‘biggest strike’ by university medical centers ever. During two action days in September and November, healthcare employees from seven UMCs worked so-called ‘Sunday shifts’: they only provided emergency care. In other departments, plannable care was discontinued. Just before the employees wanted to take action a third time, a breakthrough was achieved. Under the new collective labor agreement, employees will receive a minimum of EUR 75 gross per month, among other things. In addition, the minimum wage has been increased to 14 euros on 1 January.

Employees also receive a bonus if rosters are changed within 72 hours, a better allowance for irregular shifts and there is more rest time after an on-call shift or after a night shift.