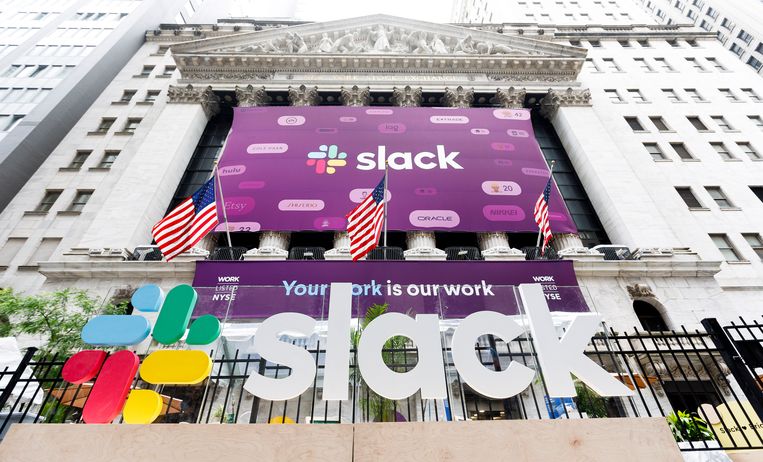 It had been in the air for a while, but the bullet went through the church on Tuesday. US Salesforce buys Slack for $ 27.7 billion, partly in shares. To put it in perspective, Facebook bought Instagram for 1 billion eight years ago. And two years later WhatsApp for 19 billion.

You could see Slack as the business version of WhatsApp or Telegram. Basically it is chat software with which employees can communicate 1-on-1, or in groups. Just like competitors such as Microsoft Teams, Slack is a replacement of ‘old-fashioned’ forms of remote communication such as e-mail as well as real physical contacts.

Slack’s promise is that collaboration will be more efficient. First of all, by no longer emailing the entire team about every little detail. Organizations that use Slack send more than 30 percent less mail. But also through integration with all kinds of other services. Google Docs or Outlook Calendar, for example, but also – not necessarily efficient, but very popular – services like Giphy, for adding funny gifs to messages. In total there are about 2,000 external apps and 750 bots that Slack can work with.

What does Slack have to do with online gaming?

As is often the case with new software, the original plan of the makers was something completely different. Founder Stewart Butterfield founded the company Tiny Speck about ten years ago with the aim of developing a new online game called Glitch. The Canadian previously made a lot of money with online photo service Flickr, which was later incorporated by Yahoo. While working on Glitch, there was a need for software to work together. This is how Slack was created as an internal tool. A few years later, in 2013, Slack officially saw the light. After that, the company grew rapidly. So hard that Microsoft and Google, among others, wanted to buy the company, but Butterfield did not take it. The IPO followed in April 2019.

What does Salesforce do with Slack?

‘A match made in heaven.’ Marc Benioff, CEO and co-founder of Salesforce, makes no mistake about how delighted he is with his loot. Salesforce is not well known to the general public as it is active in the business software market. It is an important player there, with an annual turnover of 20 billion dollars. The company has been on an acquisition path in recent years. Last year, Salesforce already acquired Tableau (data visualization software) for $ 15.7 billion. Strictly speaking, Salesforce is active in what is called CRM in the jargon, customer contact software. Slack fits in seamlessly with this, according to Benioff. The combination must be able to compete better with Microsoft’s much larger Teams. Slack complained to the European Commission this summer about unfair competition because Microsoft uses a tried and tested trick: bundling Teams with an existing popular package, Office.

What does the combination of Salesforce and Slack look like?

The CEO foresees a far-reaching integration and speaks somewhat roaringly of ‘the most strategic combination in software history’. Companies that use the Salesforce software to communicate with their customers, partners and employees will automatically receive Slack. That won’t come as a shock to most, by the way. Almost all companies that have a paid subscription to Slack already use Salesforce.

Why is Slack being bought right now?

Companies such as Salesforce, Microsoft, Google and Zoom are benefiting from this development. It is therefore logical that there is a takeover wave of tech companies that are doing something in the field of efficient remote working. Adobe recently bought Workfront for 1.5 billion. Analysts expect more acquisitions to follow. Dropbox (cloud storage of files) is often mentioned.

Butterfield will continue to lead Slack, which will become a separate business unit within Salesforce, for the time being. Both companies are based in San Francisco.