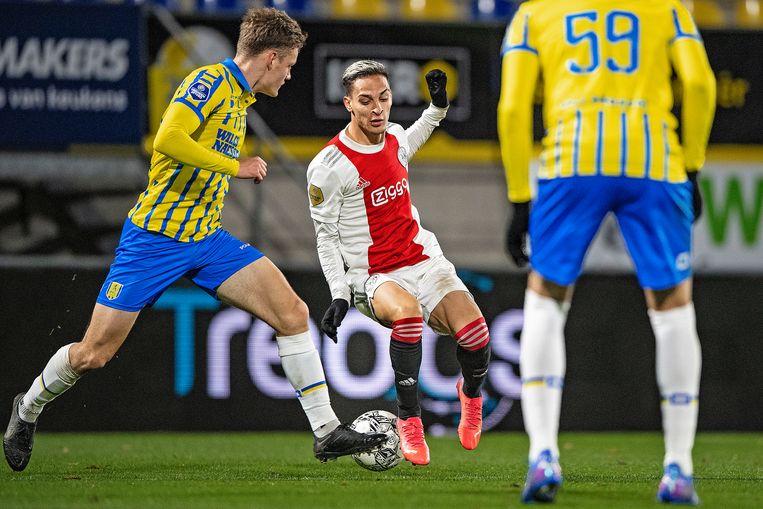 It was especially not a nice evening for Luuk Wouters from Schijndel, with jersey number 34, 22 years old and left back at RKC on Sunday. He stood in the empty stadium opposite Ajax player Antony, recently international of Brazil, tricked and challenging. Truly an attraction to behold, so self-confident that it almost sprays out his ears. A nice couple also with Noussair Mazraoui, who is so much more than right back.

Antony went in and out, playing the ball between legs. ping. Shoot, cut. He is playfulness itself. Until coach Erik ten Hag replaced him in the 70th minute. Although it is better for him, in terms of rhythm and recovery, he had a good time on the beautiful lawn decorated with autumn leaves that replaced the artificial grass two and a half years ago, thanks to the proceeds of the transfer from Ajax to Barcelona from Frenkie de Jong. He never played for RKC, but only in the combined youth academy with Willem II.

Wouters looked admiringly at Antony’s movements. On such an evening such a football player does not immediately think ‘oh well, I played football against Argentina last week and spent a long time in the plane, it’s nice to sit on the couch in Waalwijk for a while. No, Antony would have liked to flash past Luuk Wouters a few more times, but David Neres relieved him.

So it was the match after all that traveling with the national teams, after the denouement for many in the World Cup qualifying series. “We could have trained for two days this time,” Ajax coach Erik ten Hag noted with satisfaction. Daley Blind, Ryan Gravenberch, Davy Klaassen, Jurriën Timber and Steven Berghuis, although the latter two were injured at the Orange squad, qualified for the World Cup. Dusan Tadic was the big winner in the brilliant titanic battle with Portugal in Lisbon, in which his equalizer and decisive cross just before time on the fabulously headed Mitrovic made tears flow at Ronaldo.

Lisandro Martinez and Nicolas Tagliafico qualified on the basis of Lionel Messi with Argentina, Sébastien Haller missed the World Cup with Ivory Coast by losing to André Onana of Cameroon and Edson Alvarez did not do well with Mexico, but the Mexicans will make it anyway in the end.

And at RKC? Almost everyone stayed at home in Waalwijk, except for Saïd Bakari for the Comoros and Ahmed Touba for Algeria. The others had two weeks to prepare for Ajax, but what can you do more than defending in a concentrated way and hope that it is not too bad, that Ajax misses a few opportunities? RKC should have hopes, because Ajax played 0-0 two matches in a row, at Heracles and at home against Go Ahead. In the Eredivisie, no fewer than 197 minutes had not been scored since October 24, during PSV home. That tendency had to change, if only to maintain the lead on goal difference compared to PSV, while Feyenoord even has one loss point less.

“We had intended to play with much more movement,” said Ten Hag. “Players must be willing to walk, to create spaces. Lots of sacrifice runs and tedious meters, in the interplay.’ Although the duel was tensionless, Ajax did an excellent job and it was quite a nice match, because of the easy combination game of Ajax, for Antony, for RKC too, who want more than to entrench themselves around the penalty area.

Sébastien Haller headed in before half time after a cross from Dusan Tadic, Steven Berghuis tapped in after a wonderful combination and scored again after half time, after goalkeeper Etienne Vaessen released the ball. In between, at 0-1, there was that truly formidable save by goalkeeper Remko Pasveer, on Michiel Kramer’s header. Pasveer is one of the stars of Ajax this season, even in such a match in which he hardly got anything else to do.

After the break, Timber and Haller scored again. Ajax has target figures of 42-2, and yet nine loss points. Ten Hag: ‘We still need too many chances.’ Timber: ‘We are doing quite well defensively.’ The young defender even scored, because attacking is also part of his duties. ‘Those are the demands of the trainer. I’m not going to say it’s easy, but it does make you a better player. At Ajax you should have the whole package. It’s also a Dutch thing.’ Ten Hag, satisfied: ‘This is a basis to continue.’