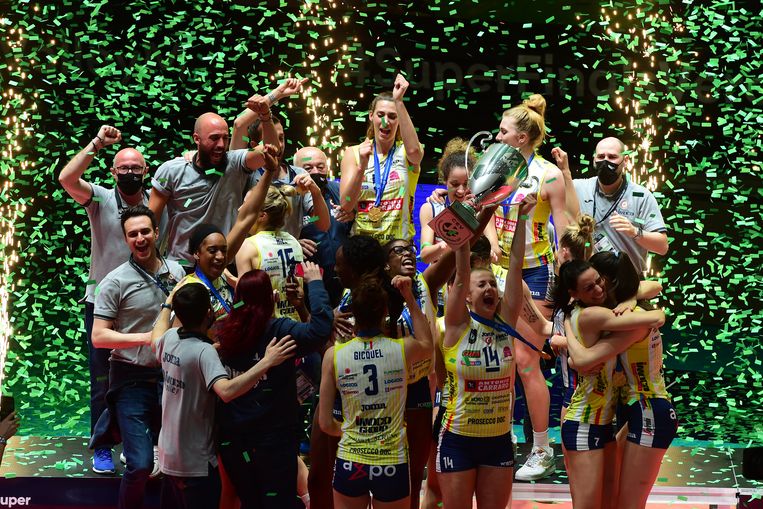 The trophy cabinet of Robin de Kruijf from Houten was filled more generously and richer on Saturday. The 29-year-old volleyball player won the European club championship, the Champions League, with her Italian club Imoco Conegliano. Two years ago, De Kruijf already became world champion in the club teams with that team.

The ‘mid’, as her position in volleyball is called, had to wait quite a long time for the highest price in Europe. Over the years, De Kruijf acquired three silver and two bronze medals in the Champions League. On the eve of the super final in Verona – one match, no semi-finals – she held back when it was predicted that the team with world star Paola Egonu in its midst would undoubtedly win the top prize of the public-less season.

De Kruijf, with the Dutch team in 2009 and 2015 the losing team in a European final, did not want to take anything for granted. Her Imoco had to compete against Vakifbank, the Turkish top team of coach Giovanni Guidetti. De Kruijf also played there for two seasons (2014-2016) and in the Netherlands it is well known that the extroverted Italian Guidetti is a wizard as a coach. He worked in the previous Olympic cycle with the Dutch women’s team that, under his mental insistence, made it to the last four in Rio.

In Istanbul Guidetti has the playmaker and middle player of world champion Serbia at his disposal, Maja Ognjenovic and Milena Rasic. Its diagonal is a Swedish hammer, Bella Haak. With the Brazilian Gabi and the American Bartsch, the Italian conducted an international company on Saturday that took a lead (1-0, 2-1) twice in the final battle of the giants.

Imoco equalized twice, after which the fifth set was decided by the quality of hardhitter Egonu, game distributor Joanna Wolosz, a Polish woman, and the stable contribution of De Kruijf. Until that fifth set, the harvest of Egonu, a jumper that seems to come off a trampoline, was shaky. She was level with Haak in terms of attack points, 30 at 30, but made strange misses. In that fifth set, Egonu made up for it all, with nine points, Hook only three.

At 6-6, De Kruijf placed her fifth kill block on a smash from the Swedish. Then she took care of the break to 9-7, with a super-fast through the middle. According to De Kruijf, the coordination with Wolosz had been poor in the play-offs for the Italian (won) title. In Verona it turned out to be in order at the right time.

The title was in. The coach, Davide Santarelli, was crying tears of happiness. He dedicated the success to his mother. De Kruijf, quite calm in her reactions, could determine that she had been awarded eleven points: 6 attack points and 5 direct block points. With that she was second in the competition classification. Egonu was first, with 41 points. Only six points away from her Italian record a few weeks ago: 47.


Nimir Abdelaziz became top scorer of the Champions League final in Verona on Saturday, but the club team of the Dutch international, Trentino, had to leave the cup to Polish opponent Zaksa Kedzierzyn-Kozle: 22-25, 22-25, 25-20, 26 -28. Nimir made 21 points, but only one ace, his trademark. At 25-25 in the fourth set, he served, at a crucial moment, just outside the lines. Moments later, the game was decided with a good serve, directly on the floor. The blow came from the Polish diagonal Lukasz Kaczmarek, 2.04 tall, 102 kilos in weight. His cannonball was too much for the Italian reception.