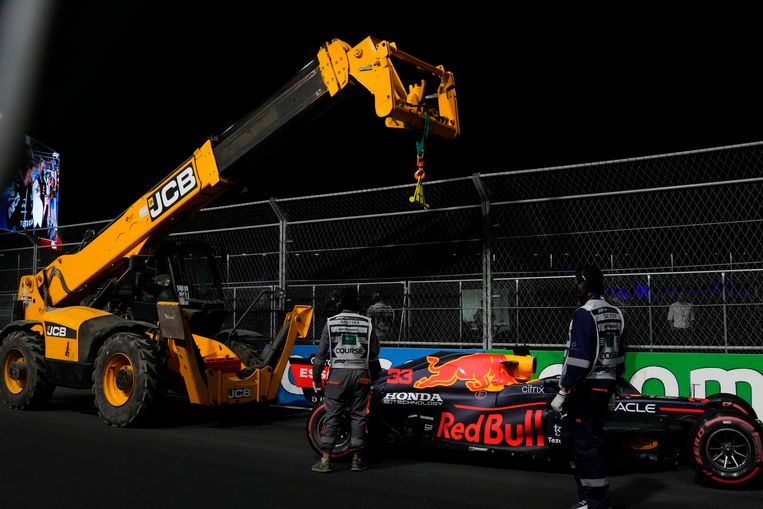 It was one of Verstappen’s few mistakes in recent years, and at such a crucial moment. The driver himself seemed to realize this too, when he bent his head away from his car. Verstappen’s first comment was short but sweet: ‘This is terrible’.

On a street circuit like in Jeddah, the line between success and failure is razor thin. The drivers skim a few centimeters from the crash barriers in their efforts to squeeze maximum speed out of their cars. With the pressure on his shoulders, in an ultimate attempt to be faster than his title rival Lewis Hamilton in the final of qualifying, Verstappen ended up on the wrong side of the tightrope.

That changed Sunday’s race in one fell swoop. A race that he could have won relatively easily from first place is now a GP in which Verstappen has to do everything he can to keep his title chances as good as when the weekend started. He now starts the race (at 6.30 pm Dutch time) in third place, behind the two Mercedes, on a circuit where overtaking seems almost impossible. More misery can await him if it turns out that his gearbox is broken due to his crash. Should a substitution of that part be necessary, he will be moved back five places according to the regulations.

Nobody knew beforehand who would be fastest on the brand new track in Jeddah, which was built in just eight months. The drivers’ experiences after the first practice sessions on Friday were mixed. They praised the lightning fast, unrelenting character of the narrow track, where the cars average 250 kilometers per hour.

There were also difficulties, especially with the tires. They proved difficult to get and maintain at the right temperature. With Verstappen and Hamilton, the competitor for the world title, struggling with the same problem, the differences in Jeddah were minimal from the very first training meters.

Guardrails close at every bend

Verstappen drove one lap after the other in the first of the three qualifying parts on Saturday, even though his time was more than enough early on to survive that first part. All to feel more relaxed on the tricky track.

All those extra laps were not in vain. In the second part he only got faster. It was considerably more difficult for Hamilton. He was considerably slower than Verstappen and complained of a lack of grip.

In the final, decisive part of the circuit, Hamilton almost lost control of his Mercedes. As a result, his first attempt to set a fast time failed. Verstappen immediately drove a flawless lap, with which he was a lot faster than Hamilton. But the Briton recovered and set the fastest time on his last lap. With that, the assignment for Verstappen was clear: to be faster than his title rival one more time.

He seemed to succeed in that in a masterly way. He set the fastest qualifying times in the first two sectors of the circuit. He then steered his car through the third and final sector without any problems. Until that very last bend.

‘We have to pass two men’

After qualifying, he looked dejected in front of the Ziggo Sport camera. He didn’t know exactly what had gone wrong. “I blocked in that last corner and tried to save my lap, but unfortunately that was not possible. It sucks, but I can’t change it now,” said Verstappen.

How does he approach the race now? “Catching up,” he said firmly. ‘We have to pass two men’, referring to the Mercedes in front of him.

Nothing is lost yet, Verstappen emphasized. Exactly a month ago, in Mexico, he was in a similar situation after a disappointing qualifying. In the race he overtook both Mercedes right away in the first corner. He won the race sovereignly. In addition, Verstappen’s crash showed that at every corner in Jeddah there is a threat of a crash that could turn the race upside down. Verstappen: ‘And the speed is certainly there, so that’s positive’.