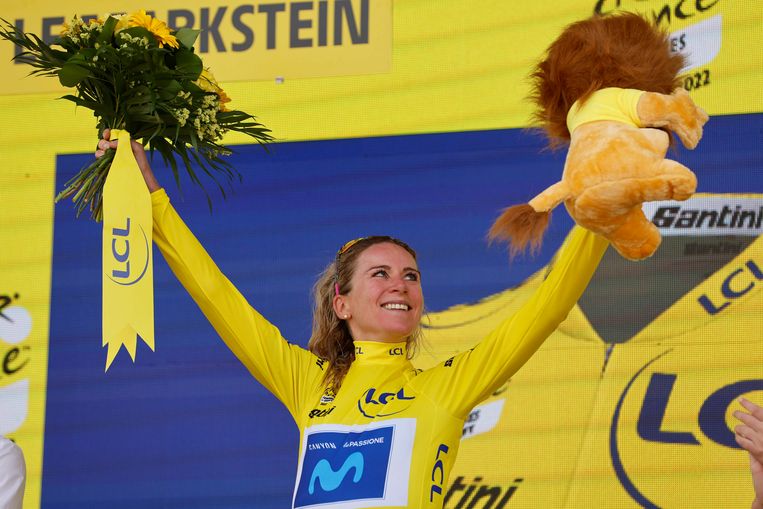 Maybe, just maybe, there were still riders who quietly hoped that they could at least give Annemiek van Vleuten (39) a match in the Vosges, the place where the Tour de France Femmes will fall into place this weekend. Movistar’s leader had been ill for two days, it was a stomach infection. She couldn’t keep anything down, she felt as limp as a dishcloth. Teammates had pushed her in the second leg, out of sight of the cameras.

On Saturday at the finish in winter sports village Le Markstein, Van Vleuten kicked out the glimmer of expectations with relentless pedal strokes. The competition is lagging far behind. Barring accidents, she can no longer miss the final victory in the Tour, with only the ride to the hair-raising Super La Planche des Belles Filles on Sunday. Such a climb inspires little awe. It is above all a challenge. The lead on the number two in the standings, Demi Vollering, the only one who was able to keep up with her, is 3.14 minutes.

She had already explored the route of the seventh stage, 127 kilometers with three first category mountains. The mission starts early. With 85 kilometers to go, on the first tough climb, the poisonous Petit Ballon, it becomes clear that the discomfort from the upset guts has been temporary. Together with Demi Vollering, Van Vleuten drives away from a leading group of riders who also have classification ambitions. On the second col, the irregular Platzerwasel, her fellow escapee goes overboard. The solo evokes memories of the 2019 Yorkshire World Championship, when she set off on her own with more than 100 kilometers to go, not to stop. Although she has already announced that she will stop after next year, there is no decline in her performance.

The way she shook off Vollering typifies her almost self-absorbed style. She stands on the pedals, almost infinitely long. Not once is there a look back. Like she doesn’t even want to know. It’s her adage: she only focuses on what she can control. Vollering is still fighting for what she’s worth, but has to give up more and more ground. The grimaces display far-reaching exhaustion. She opens her mouth, sticks out her tongue, blows air out. Fight, fight, fight!, SD Worx team manager Danny Stam calls out to her from the support car.

Even before Van Vleuten arrives in Le Markestein, seven kilometers after the passage of the Grand Ballon, the smile breaks through. She enjoys the crowd behind the billboards at the top, she lets out an intense cheer after the finish. The introversion is gone.

Vollering can still go on stage. With one point ahead of Van Vleuten, she can put on the polka dot jersey for the best climber.