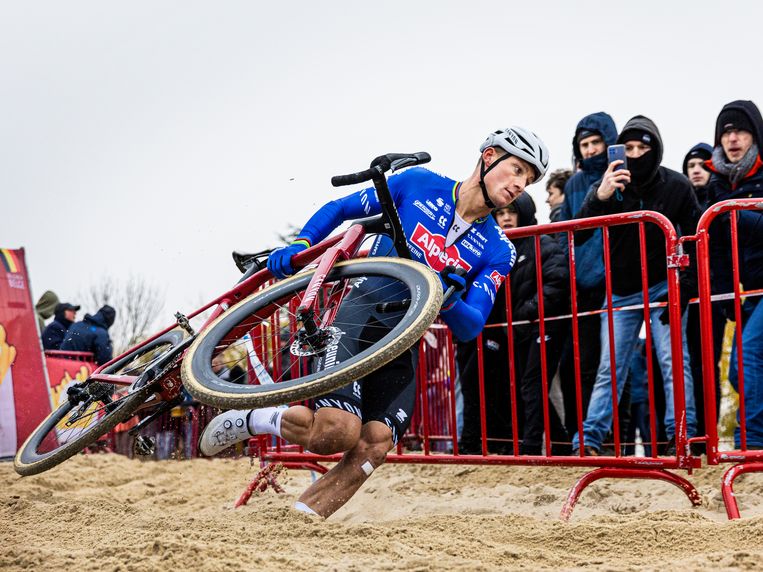 When both greats in cyclocross are on the podium under a lead gray sky on the Scheldt bank near Antwerp on Sunday afternoon, an almost perfect balance is maintained in terms of the number of decibels of cheers. The fans of the cross are happy with the return of the duel between Mathieu van der Poel (27) and Wout van Aert (28).

This is also reality: the Wilhelmus sounds for the rider who takes off the winter hat with peak for this. Van der Poel appears to be the strongest for the time being, he crossed the finish line fifteen minutes earlier with a lead of 23 seconds over his eternal rival.

The game was advertised on posters as the clash of the titans, the first confrontation this season between four-time world champion Van der Poel, three-time world champion Van Aert and reigning world champion Tom Pidcock. But it does not come to a fight on the beach of Sint Anneke on the cutting edge. It’s a show of power from a loner. Already in the second of the total of seven rounds, Van der Poel distances himself. Van Aert, for whom the game is his debut this season, immediately appears to be the strongest of the rest. After a messed up start, Pidcock manages to make steady progress to eighth place.

The foreplay was shrouded in some mist. Van Aert said last week that ‘the hunger for performance is not so great anymore’. He feels little pressure in the cross. Winning there or not doesn’t matter that much anymore. That period is behind him. Most of all he wants to have fun.

That is in stark contrast to his performance on the road. He knows that when he appears at the start there, something is expected of him – from the outside, from his Jumbo-Visma team, ‘and also from myself’. “Mentally taxing,” he called it. The fact that he was struggling with bronchitis at the end of October had disrupted his preparation for his return to the field. The top form is certainly not there yet.

Van der Poel had a current reason to temper high expectations. Last week after his winning return, he still complained about a lack of technique – he slipped at least three times. On Saturday, during a race in Boom for the Superprestige, he hit cobblestones hard at the start of the second round and hurt his shoulder and left knee – the joint on which he has already had two operations.

It was “a stupid mistake,” he confessed. He had lost concentration for a moment. In order not to get too stiff, he decided to finish the cross. In the evening he crawled on the dynamometer and put his knee in the ice. He also visited the physiotherapist. From home he cycled to Antwerp himself on Sunday to remove any remaining skid resistance.

Pidcock said in advance that the course with the long passages in the sand and the limited climbs was not really for him. When it comes to strength and explosiveness, he still sees himself as inferior to the Dutchman and the Flemish.

It starts on the Scheldt with arm wrestling after all. From the second row of the grid, Van Aert shoots forward like a rocket and is the first to dive into the sandbox. Van der Poel appears calm, tacks forward and takes the lead before the first passage of the finish and then starts to accelerate. Van Aert recognizes a familiar tactic from his opponent: one round of crazy hard driving. “Failed to follow.”

Van der Poel looks like the rider who simply does not tolerate anyone in his wheel, now freed from the back problems that forced him to take a long break after a race and a half last cyclocross season. ‘It still feels a bit stiff’, he says after the ceremony in a cabin behind the stage.

His lead increases to 20 seconds. For a moment it seems that Van Aert is getting close again after strong passages through long stretches of sand. But then the catch-up race comes to a halt and after a trip over the beams, the matter is settled.

No, according to Van der Poel he did not take any risks by throwing his cards on the table so quickly. He saw that the others had to recover from the fast opening lap. That was the signal for him to put the bow on it. “But when they come back, they come back and it starts again.” That Van Aert was approaching did not alarm him. According to him, the frontrunner in the sand regularly has the disadvantage that he has to make a new track and therefore often has to get off his bike before his attackers. “But I had a good pace. I hardly made a mistake today.’

Next to him is another satisfied rider. Van Aert: ‘I did not expect this, a podium finish. I expected a setback along the way, but I was able to maintain my speed throughout the race. I can build on this further.’ He has made no secret of it for a long time: there is only one goal, the World Cup in Hoogerheide, at the beginning of February. Van der Poel can see his last comment as a warning. “Based on today, I’m well ahead of schedule.” For the next reunion, you have to be patient: the Friday before Christmas, at the Zilvermeer in Mol.

Van der Poel leaves the bruised body for what it is. This evening, he says, he is ‘going to a restaurant’. That also sounds like old times; he often allows himself a good fries after a victory.