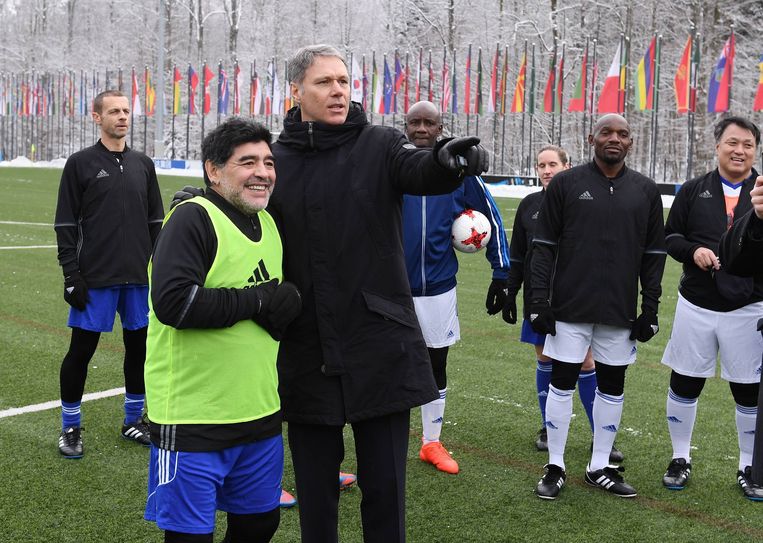 ‘Well… Maradona. To me, this is another one that you will always remember where you were when you heard he was dying. Really great. Really hurts me. He is a huge hero, a genius footballer who has had an incredible impact on football. Even beyond football. At the same time, he has always remained himself. Completely authentic.

‘We were Milan, he was Napoli. He was that crew. We had to dethrone him. That worked, we usually won. But every meeting was very special, you knew what he could do, what he had already achieved, how good he was. You saw that too, he always took his responsibility.

‘He had already passed his absolute top by then. The world title with Argentina in 1986; that was his peak as a football player. After that still champion with Napoli in 1987, but he was already less when we played against him. He played football and lived without limits. He couldn’t shield himself, both on and off the field. He belonged to the people, so he sometimes flew off the bend. That’s what made him so great, fascinating. Made him a great example on the one hand and not on the other.

‘The great thing is that, no matter how big, famous and popular he was, he has always remained himself. Its authenticity makes it special. That brought him a lot but also cost him a lot. As a result, he also leaves an enormous legacy in a broader sense. It wasn’t just football, it was the whole person. There have been so many good footballers, but he was really very much lived. Extremely. As a result, he also experienced a lot and let other people experience a lot, but what I said: that also cost him something. And yet always remained a man of the people. Completely unique.

‘I didn’t have what other players had, that they were secretly watching him on the field. Of course I knew: this is a really great player, a special guy. But I was still working on my own achievements. Later when I worked at FIFA, I spoke to him sometimes. He was always friendly, nice, really like a buddy who wants the best for you. You felt that very much, which is why he was so popular. He was an icon, but a touchable icon.

‘Of course he did crazy things, made mistakes, but because he was always himself he remained loved. His crazy and dark sides were not hidden, but were completely on the surface. You got the full picture, the man in all his facets, the good and the bad. As a result, you were caught, touched, and sometimes disappointed. But he was still a man to love. ‘

Other Dutch players who played against Maradona


Mario Been, ex-Pisa: ‘Maradona was my hero, well of whom not. I remember that I already played in Feyenoord 1 and watched Serie A on TV and figured out for myself: gosh, I want to play there again. The Serie A was then becoming the biggest competition in the world. A few years later the time had come, I went to Pisa, Maradona was with Napoli. I had already been allowed to play together with Cruijff and Van Hanegem at Feyenoord, but Maradona was so much more respected in the world.

‘What he managed to do there was actually not possible. He restored the luster to the south of the country. His pride. It was always the clubs from the north, Internazionale, AC Milan and Juventus, that dominated. Napoli previously played for relegation. They suddenly had Maradona on the hook. He had some great team mates in Giordano and Careca, MaGiCa, but he always had to do it. The pressure was on him. And he often did. Two-time champion, one UEFA Cup. Always showing beautiful things. Always the heart on your sleeve.

‘A beautiful picture was taken of us, we both had number 10. We stood side by side before the match. I think he thought it was less impressive than I did, haha. I also have a shirt of his, baby blue, still made of wool. I cherish that. ‘

Theo Snelders, ex-FC Twente: ‘We played with FC Twente in 1985 in Naples against the Napoli of Maradona during a friendly match. Do you know I tucked that match deep? It wasn’t until the film about Maradona came out over a year ago that it came back. I got a call about it Tubantia and suddenly I remembered things. We warmed up indoors. Trainer Korbach called him ‘a small plug’ when Maradona walked past. But he was super good. It went well for me too. It remained 0-0. Although I only remember that he once took my shoe that had gone off, walked it to the center line and then threw it back.

‘It was a full house, Napoli was at its peak then. Maradona at its best. Later in the catacombs I received compliments from him for my playing. Something very special. A shame that there was no club photographer. That you just pitted against the best ever … and did it right … apparently; that is something very beautiful. ‘

Everything was beautiful about the footballer Maradona in his heyday. His name alone: ​​Diego Armando Maradona. A dribble in itself. Read Willem Vissers posthumously.

Editor Paul Onkenhout was the first Dutchman to discover Diego Maradona at the age of 15. Or at least, that’s his theory. Read his article here.

Was Diego Maradona a vulnerable winner or an arrogant bastard? We spoke about it with filmmakers Asif Kapadia and Chris King, following a documentary about the footballer. “Diego is taller than most actors.”