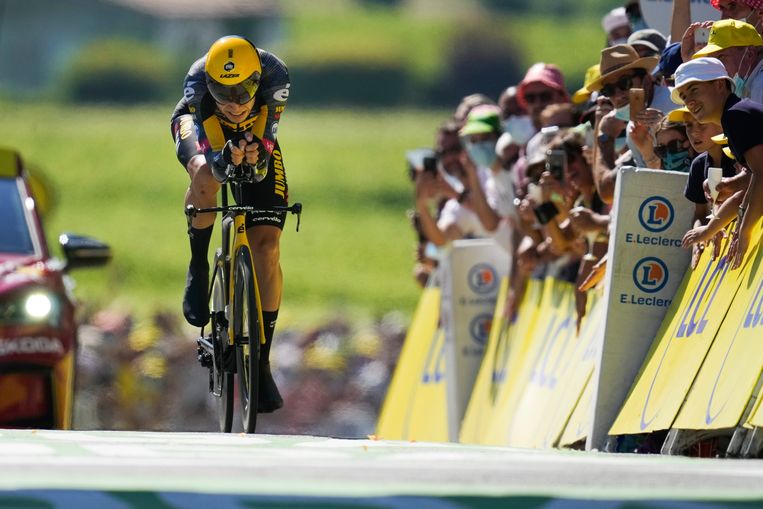 ‘Winning a time trial in the Tour de France has been on my mind for a long time bucket list’, said Van Aert, who suffered a frightening injury to the thigh in just such a time trial in 2019 when he got caught behind a crush barrier. The versatile Belgian then won stages in a bunch sprint in the Tour and in this year’s Tour the tough mountain stage in which the course led twice over the Mont Ventoux. “I think that stage win is the highest,” said Van Aert. “That was also the most emotional because I crossed the finish line there solo. A time trial is mainly a matter of waiting until it’s your turn and then waiting until everyone has been.’ The Belgian flew at 51.5 kilometers per hour in a time of 35 minutes and 53 seconds over the 30.8 kilometer long course.

Towering favorite for the time trial was the upcoming winner of tomorrow’s Tour in Paris, Tadej Pogacar. He won the first time trial, the fifth stage, which was very similar to Saturday’s time trial, but finished eighth and appeared to be playing it safe on the fast, difficult course full of speed bumps. After all, a fall could have cost him the Tour victory, although his lead over Vingegaard was 5 minutes and 45 seconds. The Danish revelation of Jumbo-Visma managed to save 25 seconds. Tomorrow’s final stage to Paris always has the character of a parade in which nothing changes in the general classification.

For Wilco Kelderman the time trial turned out to be a disappointment. As a specialist, he considered himself likely to rise from fifth to fourth place in the standings, because he would have a better time trial in the legs than the number four, the Australian Ben O’Connor. Kelderman’s gap on O’Connor was 32 seconds, but the Dutchman only managed to get away from it 21.

All in all, the result of the time trial did not change the top 19 positions of the general classification. The only change that the ride against the clock has brought to the top is that Bauke Mollema, who won the 14th stage this Tour to Quillan, climbs from 21st to 20th position.

Especially for Denmark, the time trial between Libourne and Saint-Émelion was a success with four Danes in the best ten. Behind Asgreen and Vingegaard, Mikkel Bjerg, teammate of Pogacar at UAE Team Emirates, was seventh and Magnus Cort Nielsen of EF Education-Nippo was ninth.

Best Dutchman was Dylan van Baarle of Ineos-Grenadiers. He finished tenth. As for the Dutch, brothers Boy and Danny van Poppel, teammates at Intermarché-Wanty-Gobert, delivered a remarkable performance by finishing 83rd and 84th in exactly the same time, 4 minutes and 28 seconds behind winner Van Aert. The brothers are not twins, by the way: Boy van Poppel is 33 years old, his brother Danny is 27.