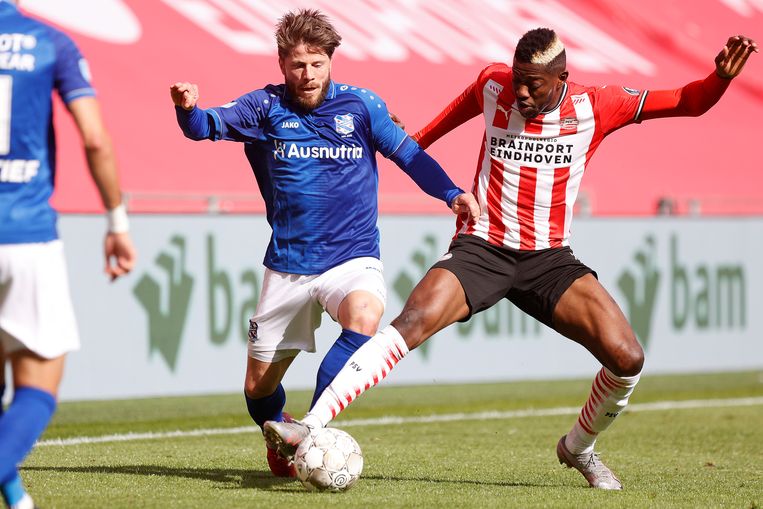 PSV is eagerly looking for a midfielder with a creative brain. Also against the well-organized Heerenveen (2-2), Pablo Rosario and Ibrahim Sangaré have the necessary trouble to provide the game with a surprising inspiration. It is a defect that PSV has been facing all season with the two controlling midfielders.

For a long time, trainer Roger Schmidt swore to the much-criticized duo. Invariably, the German trainer praised both players for their physical constitution. As important pawns to put pressure on the opponent and quickly win the ball. But just as often the lack of football ability came to light.

It is not without reason that Schmidt moved the footballingly strong Boscagli from the defense to midfield in recent weeks. The Frenchman was badly needed in the back against Heerenveen. With a view to next season, the club has its eye on Davy Pröpper (Brighton & Hove Albion) and Heerenveen revelation Joey Veerman, although the latter was missing on Sunday due to a positive corona test.

Schmidt’s tactics are clear: he grants the opponent the ball and then captures it as quickly as possible and pulls it towards the enemy goal. Powerhouses Rosario and Sangaré play an important role in guarding the organization and taking the ball.

But at the end of his first season in Eindhoven, Schmidt sees that qualitatively less opponents place the problem with PSV. By organizing themselves compactly and granting the ball to PSV, Rosario and Sangaré come to the ball more often than they would like to take care of the build-up. That is precisely not the strength of both players.

“Rosario and Sangaré are struggling to maintain the high level they achieved earlier this season,” said Schmidt about his choice to pose Boscagli more often in midfield in recent weeks. ‘They struggle with their shape. I check for each match what the strongest team is to start with. ‘

Although it is still the question whether Veerman can take the step from the subtop to the national top, he could add something to the game of PSV with his way of playing football. The 22-year-old Volendammer already gave nine assists this season. Rosario prepared four goals, Sangaré only one.

Veerman also created more opportunities on his own at Heerenveen (57) than Rosario and Sangeré together at PSV (38), according to figures from statistics agency Opta Sports. In addition, he played 43 percent of his passes forward. Against 30 percent for Rosario and Sangaré. More often they opt for a sideways pass, while Schmidt prefers to go to the opponent’s goal as quickly as possible.

“Veerman is a good player, especially on the ball,” said Schmidt in the run-up to the duel with Heerenveen. ‘He makes good decisions under pressure and always looks ahead. He is always looking for the wingers or the strikers. ‘

The same applies to 29-year-old Pröpper, who has been wearing the PSV shirt for three seasons since 2015 and has grown into a supporting force. With his footballing qualities, the 19-time orange international could be an asset to the physically strong Rosario or Sangaré, although he only came into action for 210 minutes this season with the number fourteen of the Premier League due to an injury.

Heerenveen also awarded PSV the ball on Sunday. The team visibly struggled to find openings in the tight-knit defensive of the Frisians, who appeared dangerous for goalkeeper Yvon Mvogo a few times in the switch. After half an hour, Tibor Halilovic put Heerenveen ahead, after he was allowed to cross midfield undisturbed.

“Sangaré and Rosario were unable to control the game,” Schmidt said about his choice to change Rosario at half-time and opt for more creativity with Mario Gotze as controller. But it wasn’t just them. To be fair, no player reached their normal level in the first half. ‘

With the substitute Yorbe Vertessen, among others, there was more threat from PSV after the break. It was the 20-year-old Belgian who scored the equalizer after an hour. Under the watchful eye of national coach Frank de Boer, Cody Gakpo put PSV in the lead a minute later with a nice shot from more than twenty meters.

It turned out not to be enough for the win. On a pass from Lasse Schöne, Siem de Jong put Heerenveen on the same level again (2-2). For example, PSV lost two expensive points in the battle for second place with AZ. With three games to go, the lead is one point.

But it was just as important that it became clear once again that, in addition to being a midfield powerhouse, PSV needs a playmaker who can speed up PSV’s play.