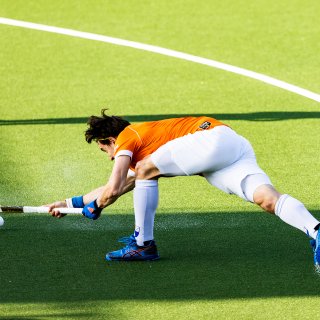 With the beckoning championship of Bloemendaal and a possible second top scorer title in a row, Tim Swaen van Bloemendaal plays in the spotlight of the national coach. ‘I hope after the Games get invited. ‘

The second half of the hockey topper between Rotterdam and Bloemendaal is less than a minute old when Tim Swaen walks to the circle with firm steps. The referee has given Bloemendaal a penalty corner and that is the ideal opportunity for Swaen to equalize the 1-0 deficit. While the players of Rotterdam put on their masks, the defender takes place at the head of the circle, about fifteen meters from the goal.

29-year-old Swaen is the man with the best penalty corner in the Netherlands. On average, one in three corners yields a hit for him. Last season he became the top scorer with eighteen hits and this season, the Brabant player is also at the top of the list with twelve goals, eleven from a penalty corner.

‘I don’t have a real secret. My penalty corner is the result of endless training, ‘Swaen explains. He has been taking dozens of penalty corners before and after training to optimize his technique for eight years. ‘The assumption, the drag and the push, all three separate parts of the penalty corner, can be perfected by training a lot on them.’

In addition, Swaen analyzes video images of the opponent before each match and regularly dives into the weight room. “I will not say that the strongest players can push the hardest, but your body must be able to deliver the explosion of force that is released when you shoot the ball on target.”

The penalty corner is not only a technical, tactical and physical affair. The mental aspect is just as important. Swaen discovered this four years ago, after his transition to Bloemendaal.

After five years at HC Eindhoven and three years at Tilburg, the defender was picked up by the record champion in 2017. Bloemendaal was looking for a penalty corner specialist. ‘After my transfer to Bloemendaal, I struggled with the pressure in the beginning. I was brought in as the specialist and demanded that all corners had to be seated. That worked against me. Every miss felt like failure. ‘

After his first season he enlisted the help of a sports psychologist and he now also has the help of a performance coach. They helped him to put less pressure on the penalty corner. “I would like to make it to the Dutch national team and have always thought that I could only realize that dream through my penalty corner.”

Swaen says he has grown tremendously mentally and has taught himself how to deal with his expectations. ‘I now know that I can also be of value if I don’t score. As a result, I take my penalty corners better and I am freer in my head after a miss. ‘

On Saturday in Rotterdam he puts his lessons into practice. Jorrit Croon’s ball, given from the back line to the left of the goal, deviates a little too far. As a result, stopper Arthur van Doren has to correct and Swaen cannot get his stick properly behind the ball. He produces a flimsy roller that bumps next to the Rotterdam target.

Three years ago he would have been confused, not this afternoon. He quickly dispels the corner from his mind and is one of the engines behind Bloemendaal’s catch-up race in the second half. With a number of important interceptions, he prevents Rotterdam from increasing the lead. In the final phase, his teammates Arthur van Doren and Roel Bovendeert score and Bloemendaal wins 2-1.

A day later, Bloemendaal triumphed again, at home 8-3 from Tilburg. Swaen again does not score from a penalty corner, but does make his first goal in the four years that he plays for Bloemendaal. After the two victories of this weekend, the orange shirts are at the top with 36 points from 12 games. The top four teams after 22 games qualify for the play-offs for the national championship.

Swaen knows that the intended championship with Bloemendaal and a possible second top scorer title in a row can bring the invitation to the Dutch national team close. In October last year he already played in a match against the Olympic selection, but the chances are small that he will go to Tokyo. “I hope to be invited after the Games.”

Should it come to that, Swaen would also like to take the penalty corners at Orange. ‘Mink van der Weerden (Orange-Red) and Jip Janssen (Kampong) are the regular in the team of national coach Max Caldas, but Swaen does not think that his penalty corner is of inferior quality. ‘Of course the pressure will be a lot greater for the Dutch national team, but fortunately I have proven in recent years that I can handle that.’