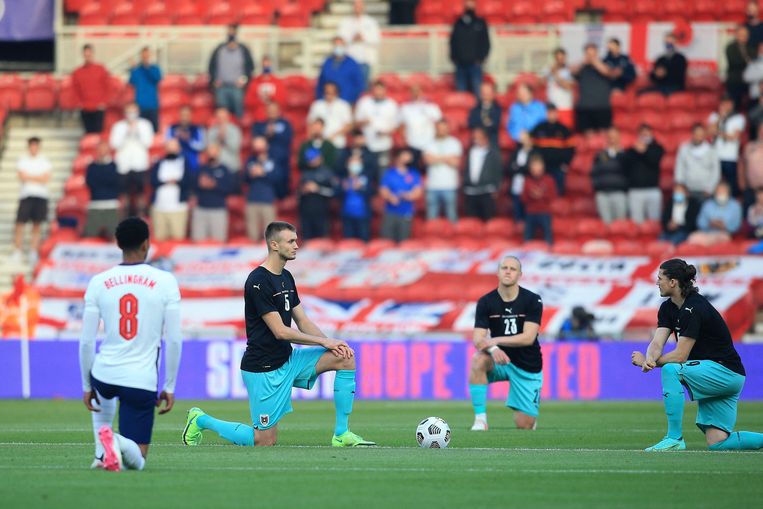 There was booing at Middlesbrough’s Riverside Stadium on Sunday night as the England and Romania players (except two) performed the American ritual. A day earlier, national team manager Gareth Southgate had said the squad was determined to get on their knees and that it was purely an anti-racism gesture. However, the booing fans see it as a bow to Black Lives Matter, what they see as a ‘Marxist organization’.

It had already become clear during the regular football season that taking the knee evokes division. Some players are left standing – such as Wilfried Zaha and Lyle Taylor – and Brentford, who has just been promoted to the Premier League, refuses to participate. The players of the national team are united for the time being. Routinier Jordan Henderson has said the booing shows racism is a problem, adding that the negative response is an incentive to continue the fight.

Match of the Dayhost Gary Lineker has claimed booers are part of the problem. Former player John Barnes, who experienced a lot of racism during his time at Liverpool, said kneeling does not help and only creates even more division. According to him, another way is needed to protest against racism. There is a fear that the commotion will have adverse effects on the concentration of the players. Meanwhile, Prime Minister Boris Johnson refuses to interfere in the national debate.

The sports pages of the newspapers even write more about kneeling than about whether Jack Grealish should be given a starting spot. A published country overview shows that the participating nations are also deeply divided. In addition to England, Wales, Finland, Belgium and France are also kneeling, but Croatia, the Czech Republic, Hungary, Russia, Spain, Slovakia and Ukraine are not. Other countries would still doubt.