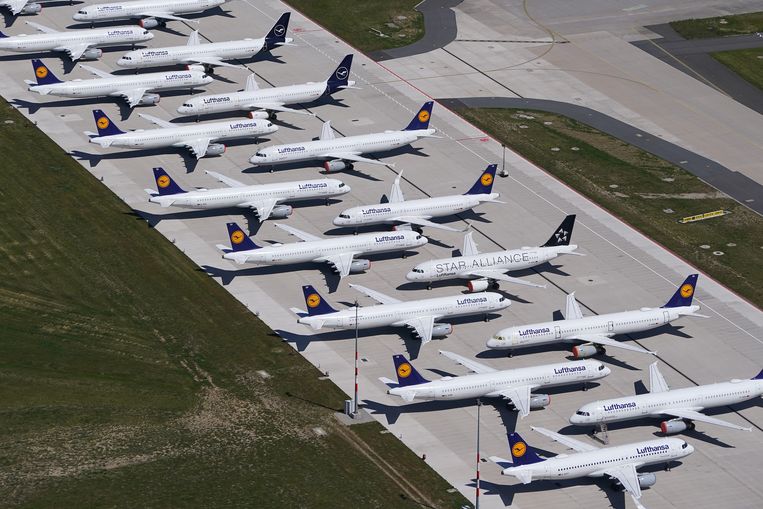 What about those ‘ghost flights’?

In March 2020, when the coronavirus first started to spread rapidly in Europe, many countries closed their borders. Only passport holders could travel home, foreigners (including from within the EU) were not allowed in.

As a result, demand for airline tickets plummeted, but airlines couldn’t just cancel their flights. If they operate less than 80 percent of their flights, they will lose their places in airport flight schedules. The result: almost empty planes flew throughout Europe in order to retain landing rights.

The European Commission reacted quickly by use it or lose ittemporarily suspend the rule. This allowed airlines to cancel unprofitable flights without consequences for their landing rights. When international air traffic started to pick up again thanks to the looser entry restrictions, the proportion of flights that airlines had to operate was gradually increased to 25 percent, and later 50 percent. At the end of March, this will be increased again to 64 percent.

Why is this happening again?

International air traffic has been dealt a new blow by the emergence of the omikron variant. Flights to southern Africa were suddenly banned, and within Europe a vaccination or even booster certificate is increasingly requested. After a good autumn, the number of bookings for the winter has fallen sharply again.

“In the winter flight schedule we therefore have to cancel 33 thousand flights, about 10 percent,” said Lufthansa director Carsten Spohr in an interview with the Frankfurter Allgemeine Zeitung last month. ‘Due to the low demand in January, we would have liked to cancel considerably more flights. But we have to make 18 thousand extra, unnecessary flights in the winter to secure our take-off and landing rights.’ Spohr pointed out that this is difficult to reconcile with the European Commission’s target of reducing greenhouse gas emissions by 55 percent by 2030.

Belgian media reported on Wednesday that three thousand of the unnecessary flights are at the expense of Lufthansa subsidiary Brussels Airlines. The Belgian transport minister Georges Gilkinet found the empty flights inexplicable from an ecological and economic perspective. He therefore asked the European Commission to relax the rules again.

How does the European Commission react?

A spokesman for the Commission said on Wednesday that the lower requirement of 50 percent had already responded sufficiently to the decreased demand. Moreover, a further reduction would unnecessarily infringe the landing rights market.

Airport umbrella organization ACI Europe agreed, pointing out that airlines that fall below 50 percent can resort to another scheme, the Justified Non-Use of Slots (JNUS). Airlines can request their flight coordinators to adopt this measure at any time, effectively allowing them to use their slots less than 50 percent of the time.

Why doesn’t Lufthansa use it?

According to Lufthansa, experience shows that airport coordinators handle JNUS applications differently in each country. For part of the 33 thousand canceled flights, it therefore does make use of the scheme, but the company does not see a chance for the other 18 thousand ‘unnecessary’ flights. These are flights to or from countries where, according to Lufthansa, the JNUS application will be rejected. The company does not say which countries this concerns.

The rules for granting JNUS applications have been established by the European Association of Airport Coordinators EUACA. This shows, for example, that a vaccination or test certificate or negative travel advice is not a reason to cancel a flight, but a quarantine obligation or limitation of the number of passengers is.

So are the ghost flights back?

No, Lufthansa points out that reports in English-language media about ghost flights are based on a translation error. Although the 18 thousand flights are ‘unnecessary’ and unprofitable, they are not empty. On average, a flight has to be filled for about 60 percent to be profitable, these flights are below.

The aviation organization IATA called the minimum of 50 percent ‘unrealistic’, but Lufthansa and its subsidiary Brussels Airlines are for the time being the only airlines that have publicly admitted that they have difficulty with it. KLM says in a response that the problems are not yet an issue.

But even half-full flights have an excessive impact on the climate. A full plane emits about two to four times more CO . per person2 than the same journey by car, with half occupancy the comparison becomes even more unfavorable.

The EU surely is in a climate emergency mode…https://t.co/eHLFrd06y0