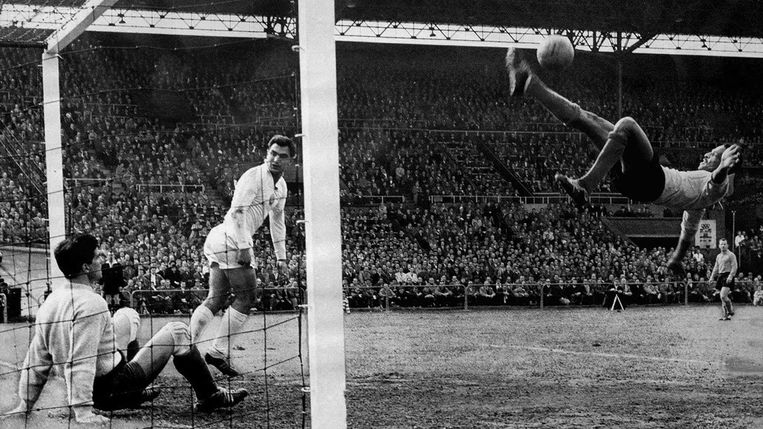 When football was paid in the Netherlands,

Surinamese were also brought in.

I was bought by Elinkwijk.

With the boat from Paramaribo, sailing for sixteen days.

and sixteen days seasick on the tumultuous seas.

I had left my wife and children behind.

I counted the days until we were together again.

In Minna, the second song from the album of the same name, the Groningen musician and lyricist Meindert Talma will pay tribute in 2021 to the first footballer of Surinamese descent in the Dutch national team: Humphrey Mijnals (1930-2019). Minna is his nickname. He is in good company on the album. Talma also sings about Memphis Depay, Arjen Robben, Frenkie de Jong and Willem van Hanegem.

Talma goes through Mijnals’ life point by point. The start in Paramaribo with SV Robinhood, the hellish boat trip to the Netherlands in 1956, his first match for the Utrecht Elinkwijk, the unadulterated racism that affects him in the Netherlands, and of course that one unforgettable action on April 3, 1960 in the Olympic Stadium, as a fellow player. from stars such as Frans de Munck, Roel Wiersma, Kees Rijvers and Coen Moulijn:

In a match against Bulgaria

I was the first black player in Orange.

In a famous photo from that match

high in the air for a graceful bicycle ride.

On the advice of a Dutch missionary worker in Suriname, Reverend Gerard Jan Graafland of the Moravian Church, Mijnals came to the Netherlands in 1956 from the bauxite town of Moengo in the Marowijne district. The vicar has discovered the stylish defender, but is not completely reassured: ‘If the winter is already too harsh and it snows, those boys who are used to the tropical sun suffer from bad headaches and they do not feel fit at all.’

Mijnals bravely braves the cold and the rain. At Elinkwijk, the cheeky stunt club from Zuilen, he is quickly joined by his brother Frank and Michel Kruin. When Erwin Sparendam and Charly Marbach also join, the ‘Five Clover’ is born, a nickname that comes from admiration.

The brothers Mijnals and Michel Kruin are the predecessors of the Surinamese legion. The trio is immortalized in a special way in 1959 when Elinkwijk, never too bad for a stunt, undertakes a trip to the Antilles. Hudson cigar factory from Roosendaal sees his chance and produces ‘Elinkwijk cigars’. The cigar bands, with pictures of the players, are especially popular.

It is even the beginning of a trend, as it turns out. Under the heading ‘Hup Holland!’ writes a newspaper in Curaçao: ‘The great success that the Hudson cigar factory has achieved with the images of the players of Elinkwijk on the cigar bands, has made the factory decide to publish series with images of all players from the Eredivisie on the bands. .’

Humphrey Mijnals is a crowd pleaser. Everywhere he and the other Surinamese go, they attract attention – also negative ones. Racism is rampant in the stadiums, among spectators and football players. Even the great Abe Lenstra participates. During a match, he berates Mijnals for ‘dirty, dirty black’ and exhorts him to return to his own country.

and send him back to Suriname.’

I was shocked. Tears came in the dressing room.

My first encounter with these kind of curses

who passed by on the Dutch football fields.

But Mijnals does not break, on the contrary, and there is a lot of support. On the day of his first international match against Bulgaria, 31 buses with Elinkwijk supporters drive to Amsterdam to encourage him. Ten seasons includes his career at Elinkwijk, DOS and SC Gooiland. The Netherlands becomes his second homeland, Utrecht his city.

His arrival to the Netherlands takes on more and more significance in later decades. Minna is a trailblazer, the frontrunner of the Surinamese peloton that lifts Dutch football to a higher level from the 1980s. At the successful European Championships in West Germany, Frank Rijkaard, Ruud Gullit and Gerald Vanenburg are three of the outstanding protagonists. Rijkaard is the first footballer of Surinamese descent to make it to Ajax’s first team in 1980. Nine years later, Stanley Menzo becomes the first colored keeper in Orange. With Edgar Davids, Patrick Kluivert, Clarence Seedorf, Winston Bogarde, Michael Reiziger and Rijkaard, Ajax returns to the European top in the nineties.

The list of football players who follow in Mijnals’ footsteps is still growing. A few days before the European Championship, the Dutch internationals of Surinamese descent show their support for Natio, the national team of Suriname that is going to qualify for the World Cup.

The line-up is strong, with Ryan Gravenberch, Denzel Dumfries, Quincy Promes, Owen Wijndal, Donyell Malen and Georginio Wijnaldum. Due to an injury, the best of all is missing: Orange captain Virgil van Dijk, perhaps the player who most resembles the adventurer from Moengo who boarded the boat to the Netherlands in Paramaribo in November 1956.

Dutch defenders do not imitate him.

And if they try,

they are discharged with a hernia.’

Stanley Menzo: I hope people see me as the international too


As a result of a ‘plan of attack’ against racism and discrimination, the KNVB will put together a committee in 2020 that will be named after Humphrey Mijnals. The Mijnals committee includes Ruud Gullit, Ahmed Marcouch (mayor of Arnhem) and former international Daphne Koster. Chairman is TV presenter Humberto Tan. The reason for the establishment of the committee is a notorious incident from 2019. On November 17, Ahmad Mendes Moreira of Excelsior steps off the field in tears, after racist statements by FC Den Bosch supporters.

Racism in football is a much-discussed theme on the talk show tables and in the newspapers, when the biography of Stanley Menzo is published in 2021: Menzo – The fight under the bar by Mike van Damme. The goalkeeper of Ajax was one of the most attacked football players in the eighties and nineties and was racially treated in countless stadiums. He does not shy away from the conversation about this, but he is more than a victim, he says in Het Parool: ‘I hope that people also see me as the international, the keeper of European finals and as the national champion. Because so am I.’