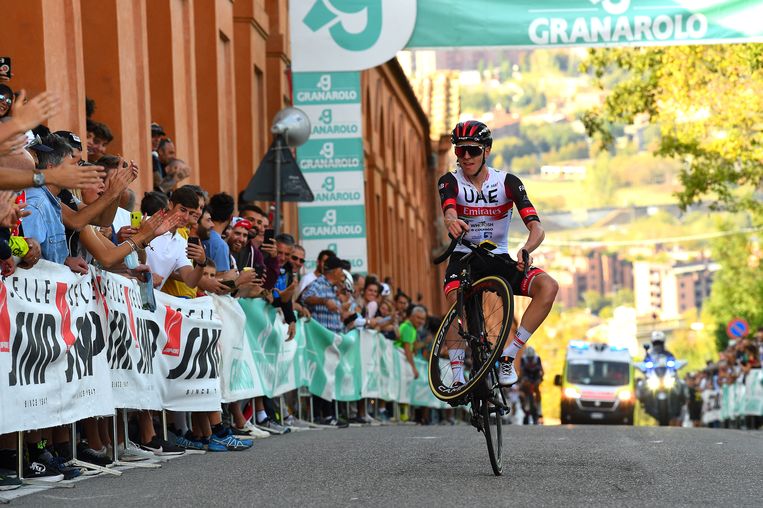 Many riders have preceded Tadej Pogacar as ‘the new Eddy Merckx’, but he is the only one who The Cannibal himself is knighted. The 76-year-old Belgian, who always wanted to win everything and always, knew it for sure after the Tour of Lombardy last Saturday. “I often hear that a new Merckx has arisen,” said the old Merckx at a sponsor event on Monday to the 23-year-old Slovenian next to him, “without such a rider meeting the conditions. But with Tadej, I think we’re really there this time.’

This season, Pogacar won two of the five so-called monuments – cycling races that have been counted among the most important of the year for more than a century – and the Tour de France for the second consecutive time. He’s only just 23 years old, Merckx said, “unbelievable.” The Slovenian ended the cycling season as the best rider in the world based on the points list of the international cycling union UCI.

Pogacar is in everything an exponent of the new cycling that has aspects such as: young, data-driven, good all season and few race days, but many training days. “Suddenly they take everything over and push the elderly back,” said 34-year-old Belgian Thomas De Gendt about all those young people, such as Pogacar, who now dominate his sport. De Gendt saw on his meters in the Tour that he was stronger than ever, but 70 riders drove away from him before him. ‘The general level is just much higher.’

Young talent is discovered earlier than before and they have hard evidence for their talent: data. And that about everything that can be measured humanly in terms of physical possibilities. Exceptionally good grades immediately give a modest choirboy a place at the top of the squad hierarchy.

Also new: good all season long. Pogacar won the first race at the highest, WorldTour level, the UAE Tour in February and the last one, the Il Lombardia monument in October. In March he mastered the Tirreno-Adriatico, in April he won his first monument, Liège-Bastogne-Liège.

At the end of June, he triumphed in the first time trial of the Tour, which he completely manipulated three days later in the eighth stage (out of 21) with a precise attack on the penultimate climb of the day. In September, Pogacar took a bronze medal in the Olympic road race, the first Olympic cycling metal for Slovenia. Four days later, number two followed: gold for Primoz Roglic in the Olympic time trial.

Pogacar also satisfies the last characteristic of the new, young, data-hungry, constantly performing cycling generation: he rode remarkably few races. Last season, he only needed sixty racing days and 9,408 race kilometers for his good results. He is in 316th place in the match day ranking. The Polish Italian Cesare Benedetti leads the way with 90 racing days – also a number for which past generations have turned their noses up.

‘My goal is not only to participate, my goal is to win’, says the somewhat shy Pogacar, despite that firm statement. ‘Tadej’, his mother, a French teacher, told last month de Volkskrant, ‘the last syllable of which, incidentally, you pronounce as the last syllable of the French detail, wants to win every famous cycling race once.’

Writing every race in your name is a bit less cannibalistic than trying to cross the finish line first every day. “It is simply impossible to win as much as Merckx,” Pogacar said nervously to “this legend” next to him, who cannot see any weaknesses in the Slovenian. “It will be hard for me to win one Milan-Sanremo, let alone seven, like him.” But once winning gold at the Olympic Games, once winning the Giro, once the Vuelta, Pogacar wants all of that. ‘And I would also like to become world champion.’

That is how Marietta Pogacar had understood her son’s ambitions, although he surprised her in the eighteenth stage of the Tour this year. She stood that day with her husband Mirko on the side of the final climb, looked into the face of her smiling son and estimated that he would give the stage victory to someone else today. After all, he had already taken the stage win the day before, his Tour victory was certain and his parents had taught him to be generous.

With a sprint uphill, which demanded the utmost from Pogacar, he still won. ‘Why’, his mother asked him, ‘that wasn’t necessary, was it?’ Yes, her son laughed, because that’s how I won the polka dot jersey. “Of course I didn’t miss that opportunity.”