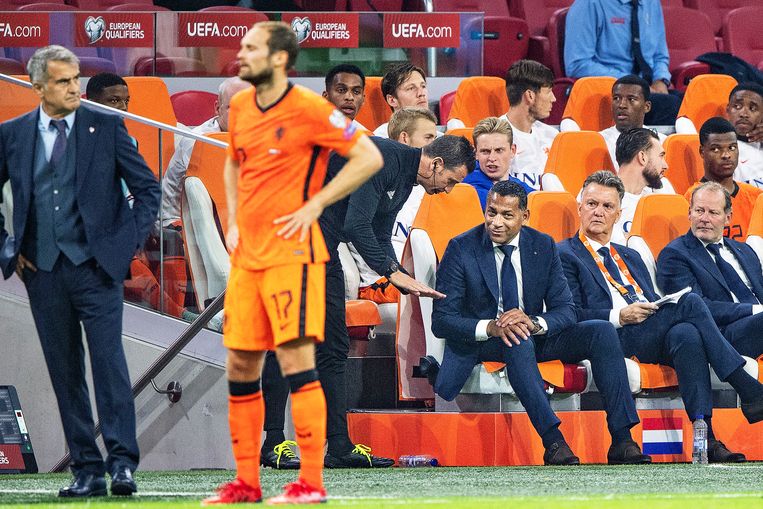 To excite his players, Henk Fraser sometimes says: ‘You wouldn’t make it in the jungle.’ The football coach knows what he is talking about. Fraser (55) became known as a ruthless defender at Feyenoord and as a successful trainer. In addition to being Sparta coach, he has recently become an assistant to Louis van Gaal at the Dutch national team.

Fraser moves easily between cultures, he lived for a long time in the Rijnmond area and for several decades in the Brabant countryside. But he was born in Paramaribo, and grew up on the edge of the Surinamese capital right next to the jungle. There he played as a little boy among the snakes and spiders, he heard the growl of a jaguar.

He still finds peace in the jungle, spends days there with his cousins ​​in the summer, hunting their own meal, although he has lived in the Netherlands since he was eight. ‘We say: ‘You can take the Indian out of the forest, but never the forest out of the Indian’, Fraser told RTV Rijnmond.

His mother belongs to the indigenous population, formerly typified as Indians. Fraser: ‘Indians are generally calm, modest and aloof. That really bothered me in the beginning.’

It touches him that Indians have been hunted, oppressed and murdered from their land. ‘The history books were not written by Indians. So in reality it will be many times worse. And the oppression is still going on. In Brazil they are chased away and shot. It means a lot to me, because I know that I am descended from it.’

Fraser’s Surinamese father worked in the army. He is his great role model, respect for the elderly and managers is deeply embedded in the trainer. And also: don’t moan, cash in, just keep going, discipline. That upbringing shaped him, he stated several times.

Even as a teenager his idea was: playing soccer at amateur club RFC with cousins ​​and friends and tinkering with cars in the garage during the week. He declined the interest of Sparta the first time, until his father suggested that he should take his chance.

The head coach Fraser is old skool in a way; he is the boss, who often makes the point that his players have to get much more out of themselves. Fraser can go wild on the training ground and in the halftime of a game. Especially if guts, initiative and ‘masculinity’ are lacking, agreements are not kept, if players show too much doubt or don’t tell each other the truth. Then his eyes spit fire, he can hardly hide his frustration. ‘Some players have trouble with that,’ says Mo Rayhi, who trained under Fraser in the youth of PSV and at Sparta. ‘I have the same character, I want to win. He is very straight, very direct. That way he gains respect.’

Off the field he can be boyishly enthusiastic, he speaks the language of the youth, and he says he is an expert on the Xbox. His door is always open to explain something, but Fraser doesn’t develop a personal relationship with every player. With Rayhi yes. However, he replaced the midfielder once before halftime after a number of mediocre corners. Rayhi: ‘I wasn’t happy, but I know what I owe him.’

After a competition in front of the camera, Fraser puts his finger mercilessly on the sore spot, not sparing himself either. He often concludes with, “Maybe I didn’t do it right.”

“I don’t know anyone who thinks Henk Fraser is a dick.” And KRO-NCRV presenter/philanthropist Sander de Kramer knows a lot of people, especially in Rotterdam, where he wrote a number of books and hundreds of columns. This is how he got to know Fraser, who partly grew up in Schiedam and Rotterdam-West.

De Kramer understands that national coach Louis van Gaal brought in Fraser as an assistant, apart from his excellent performance as a coach at ADO, Vitesse and Sparta. ‘Henk is a very relaxed peer. When I organize a competition or something else for charity, Henk is always there. But he also smiles and puts some extra sambal on my Surinamese sandwich. While I burn my mouth, he helps me start my old car.’

Feyenoord supporters still call Fraser ‘Karate Henk’. It is affectionately meant. After wandering around FC Utrecht and Roda JC, Fraser made a name for himself in the 1990s at Feyenoord, his father’s favorite club as a ruthless defender.

“He was super loyal,” says former teammate Regi Blinker. “If he got kicked himself, he let it go. But when I was kicked, Henk said in Surinamese: ‘Don’t give it back, I’ll get it for you.’ And that’s what happened.’

Fraser could do more than he thought. He looked up at Huizenhoog against midfielder Peter Bosz, coach Van Hanegem and Libero Metgod. Blinker: ‘On the field he was a fighter. It snowed under the fact that he could also play football well. Outside of that, he was introverted, sweetheart, humble. I’m amazed at how well he communicates in front of the camera now.’

Although he took his coaching training very seriously, Fraser long felt comfortable with a role in the lee as a youth trainer or assistant. But after the dismissal of head coach Maurice Steijn at ADO, whom he assisted, he was suddenly thrown to the lions. Fraser also found his way in the football jungle by continuing to develop. He guided ADO out of the relegation zone, he won the cup with Vitesse and he helped Sparta promote.

In terms of training methods, analyses, tactical insight and modern terminology, he is highly praised by players, colleagues and technical directors. Young players visibly improve under Fraser, meanwhile opponents bite their teeth on his team, which he lets play defensive fighting football if necessary to achieve a result.

Fraser works more and more on feeling, he is less concerned with the prevailing opinion. Two years ago, he came up with the duo captaincy. It was mainly explained as a statement, because a white and a colored captain were appointed. But Fraser also thought it was practical from a hierarchical point of view: the young players now had to listen to two men. In addition, one captain could protest to the referee, while the other organized the team. He was also able to pass a captain who was out of shape.

Also a novelty: having a player (preferably the goalkeeper) simulate an injury so that he could instruct his team. And at ADO, he had his son fly his drone over the field to record the training.

Fraser is chairman of the Suriprofs foundation, but is not known in the football world as the most fanatical activist in the racism debate. He prefers to keep aloof, because he doesn’t want to be pigeonholed, he told Fidelity. His agent Hakim Slimani, of Moroccan descent: ‘Henk is just like me. We see no color.’

In the AD Fraser expressed the wish that the sharp edges of the racism debate will be lifted. ‘I see people appearing on television who feel really hurt about everything. They are victims of this, of that, of such and such. I can’t stand that whine. Nor against those extremes on the other side of the racism debate, for that matter. Precisely because it has the opposite effect, that lack of nuance. Instead of understanding, they breed annoyance.

“Don’t get me wrong, huh. As a teenager I was also refused for a night tent by the doorman, while my white driving companion did come in. But do you think I let my pride be hurt by such pathetic types at a time like this? You should never want to act like a victim.’

He doesn’t want to downplay the racism problem either; notes that there are still very few professional football coaches of color. “There’s plenty of work to do.” His nuanced look is not always appreciated. He sometimes gets emails that he should be tougher.

His father taught him to collect and in his playing time at Feyenoord, racism was not a theme. Former teammate Blinker: ‘There were no tables with only black or only white players, everything was mixed up, had fun with each other. Once you were racially approached by the public, you didn’t care. Did you think: if I had red hair, they would have called me ‘red’. That was the zeitgeist then.’

Ruud Gullit believes that the time for looking away is now over. ‘Of course you shouldn’t exaggerate, but at some point you have to say: enough is enough! Especially if you have a stage for that. I also kept hearing: you have to rise above it. It’s the same as if someone is assaulted and then they say: yes, but she also had something very challenging about it.’

Many players of the current Orange express themselves firmly in the racism debate, just like Gullit, Stanley Menzo, Winston Bogarde and Clarence Seedorf did before.

Memphis Depay and Denzel Dumfries participated in Black Lives Matters demonstrations, Georginio Wijnaldum made some sharp statements and Virgil van Dijk led the program. Veronica Inside boycotted because, to the taste of the players, it went ‘far beyond the border’ on several occasions.

With Fraser they do not immediately have a fanatical ally in that area. In multiple interviews, Fraser also rejected the suggestion that he was hired because of his heritage. ‘I am good with all cultures, including Dutch culture.’

Gullit is still curious about the role that Fraser actually occupies within the staff of the Dutch national team. Can he lead training sessions or only speak to players? That’s quite a difference. Is his appointment purely a gesture or does he have real influence?’

According to insiders, Fraser is still modest at Orange for the time being. He also said himself after his first international match de Volkskrant: ‘My role is very different from Sparta. I talk a lot with players.’ He is ‘subordinate to Van Gaal’ whom he admires. “But that’s different from being in awe. I only have that for my father.’