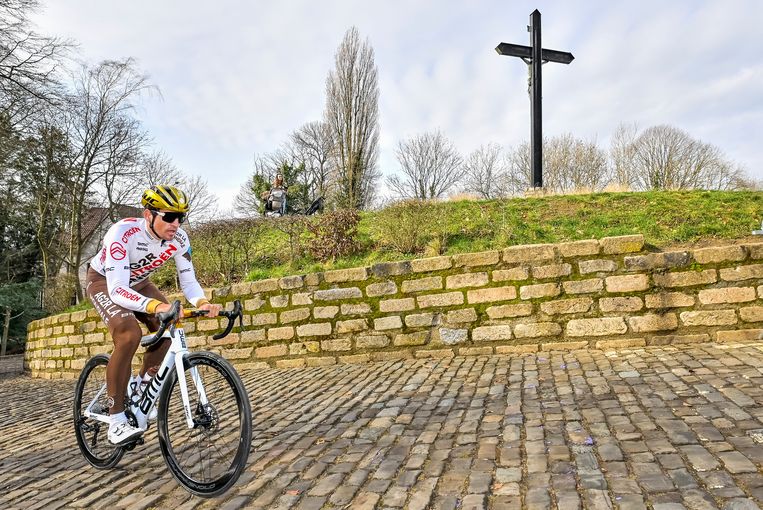 The decor was a bit unusual as a habitat for so many big names in the professional peloton. Former Tour de France winners Egan Bernal and Geraint Thomas, world champion Julian Alaphilippe and strong classification riders such as Michael Woods and Bauke Mollema grimaced earlier this month in the southern French departments of Gard, Vaucluse and Var up between the pale gray silk of bare trees . Winter has barely passed and riders of stature are already turning inside out.

In this phase it is usually mainly the tuning of the instruments. The real overture of the cycling season is now Saturday, with the Omloop Het Nieuwsblad, in East Flanders, also in late-winter tones. It is the domain of classic specialists such as Alaphillipe, Greg Van Avermaet, Tim Wellens, Matteo Trentin. The question arises why all those representatives from the established order resisted so early.

One cause is the presence of a stubborn opponent, the corona virus. Outside France, a series of preparatory courses dropped. In Australia everything disappeared from the calendar. In Europe, the Tour of the Algarve, the Ruta del Sol and the Tour of Valencia were canceled. The Colombians could not compete in their own country. The teams had to change their program and also use their leaders in competitions that are usually thinly occupied, such as in the Star of Bessèges, the Tour de la Provence, the Tour des Alpes Maritimes et du Var. Ineos Grenadiers sent Bernal and Thomas on the road early because both were sidelined for a long time due to injuries.

Bauke Mollema (34), leader for Trek-Segafredo, even drove all three races in the South of France. He won a stage in the Var and finished third in the standings. Corona played no part for him. “I’d do all three anyway. The goal was to get right as quickly as possible. ‘ After his wrist fracture in last year’s Tour, he wanted to regain competition rhythm. From his hometown Monaco he could get to the start in a few hours in his own car. No, that did not break the safety protocol. There was no bubble. It was not really strict. As far as I am concerned, it is safe enough. There was an audience, but that didn’t bother me. ‘

The virus did leave a mark: the Sport Vlaanderen team withdrew from the Star of Bessèges after a supervisor appeared to be infected. A positive test in Mathieu van der Poel’s squad on the first day of the UAE Tour in the United Arab Emirates, which ends today, resulted in the entire team, Alpecin-Felix, being taken off course.

What Mollema especially noticed during the first days of racing in France was the drive for action among the riders. ‘It is really something of the last few years. Previously, not everyone took these types of competitions very seriously. They were half training sessions. It was more relaxed. Now it is stress right away. Not only is there a race for victory, but also for tenth or even thirteenth place. Everyone is at the front from thirty to forty kilometers before the finish. It is no longer possible to move slowly in the peloton. ‘

In his opinion, it is partly the result of leveling out. ‘The differences between the riders are not that big anymore. The pack fans out across the road, there are so many who are able to fight for their place. There used to be more who knew their role, who were servants and who were at peace with it. ‘ According to him, the pressure from the teams to perform faster has increased and riders want to immediately put themselves in the spotlight. ‘Most teams saw such a stage race as training years ago. But sponsors want value for money. Now every game counts. ‘

Niki Terpstra (36), active this weekend for his French team Total Direct Energy in both the Omloop and the day after Kuurne-Brussels-Kuurne, raced in the South of France (the Star of Bessèges) and in Spain (Clásica de Almería). He saw almost the same eagerness as at the end of last season, when few games continued. ‘Then it was: you have to seize any course you can take. The peloton was less spread over competitions. The attitude was: go all out if you participate. ‘

This sentiment will still be there next season, but a little less, he thinks. Organizers have more experience on how to make their course safe in view of the corona virus. ‘That means we can run almost a full season.’ What if that turns out differently and the program has to be overhauled? ‘We know we just have to be very flexible. Of course you don’t know what will not happen, so there is no ready-made plan B. ‘

Terpstra trains a lot in North Holland with Ramon Sinkeldam (32), who also rides for a French team: Groupama FDJ. He also saw riders riding faster than usual before the opening weekend this year, but that is not due to corona. Just like Mollema, the experienced professional sees a trend: ‘You used to ride in shape for the big races with the preparatory races. Now I don’t know what is normal anymore. Everyone, especially young riders, ride faster and faster, do that earlier in the season and last longer. ‘

Just look at the age of the winners of the last two editions of the Tour de France and the Giro. ‘All in their early and mid-twenties,’ says Sinkeldam. “The young riders who have come over to the pros in recent years have a much higher level, know exactly how to get in shape and how to peak several times a year.” For example, in the UAE Tour Tour winner Tadej Pogacar (22) does not play hide and seek. He wears the red leader’s jersey. Being on the payroll of UAE Team Emirates will undoubtedly have contributed to his speedy proof.

Sinkeldam and Terpstra do not believe that the fear of a premature end of the season will lead to more nerves in the Omloop Het Nieuwsblad and Kuurne-Brussels-Kuurne. ‘Everyone is already 100 percent nervous,’ says Sinkeldam. ‘It is always a special weekend for us. Everyone wants to go fast, including me. You want to show the best of yourself. ‘

Sebastian Langeveld did that in 2011, when he again won the Omloop in hell. ‘Ten years ago I could really compete in the tough moments, now I am more of a cyclist for the long haul. I especially want to show my face and whether a good result is possible, we will see that in the race. ‘ Langeveld (36) will drive both races for the American Education First this weekend, but has mainly set his sights on Paris – Roubaix, mid-April.

He accepts that the corona virus is still in the way of masses of spectators along the course, he accepts as a given. ‘The prevailing thing for me is that I am already happy that we can do the races. Maybe it can be done again in the summer. ‘ According to Langeveld, measures such as banning the public have convinced everyone in the peloton that the important games continue.

Sports director Merijn Zeeman of the Dutch Jumbo-Visma team also believes in it. ‘It seemed to be a bit tense at the end of January, when all those rates in Europe fell. That went very fast all of a sudden. But now there is a broadly shared hope that we can continue to drive. ‘

The teams must always find their way through the different protocols, which differ greatly from country to country. The puzzle has to fit: whoever returns from the UAE Tour and wants to participate in Paris-Nice, should actually be in quarantine for seven days. An exception applies to athletes, but not for the French. Zeeman: ‘Let’s put it this way: it is no mean feat. We have a few people working full-time to map things out. ‘

He followed the first races from the corner of the eye. He saw ‘many established names who have come out of the winter well trained’. ‘Ineos is already strong in terms of width’. He also looked at the powers kicked in during climbs of Mont Ventoux and Col de la Madone, among others, and was unimpressed. ‘They were okay with me. But that may have to do with the run-up. In France, they have been racing from the start. Then you have already used up a lot of strength before you start the climb. In the UAE Tour it was exactly the other way around. The wattages on the climb to Jebel Hafeet were gigantic. But we drove there quietly. ‘

Notable absentees so far: the established names in his team. The classification riders Primoz Roglic and Steven Kruijswijk still ignored France, classic specialist Wout van Aert is not on the list of participants of the Omloop. According to Zeeman, there is a valid reason for the absence. ‘We opt for a longer training period. Riders reach a higher level there than in competitions. ‘ The team has been staying at heights in a hotel in Tenerife for quite some time – this approach has been chosen from the 2019 season. ‘There you have much more opportunity and peace of mind to work very specifically on what you want to improve, to follow your own program. The races that are now held also contain stages that are simply not useful to riders. ‘

Van Aert will make his appearance in the peloton next week in the Strade Bianche, the race on gravel roads in Tuscany that he won last year. Kruijswijk and Roglic make their first race kilometers in Paris-Nice a day later.

Bauke Mollema understands the approach. He also builds in periods without races. ‘But I just love races. I get motivation from that. And I get more speed in my legs. ‘