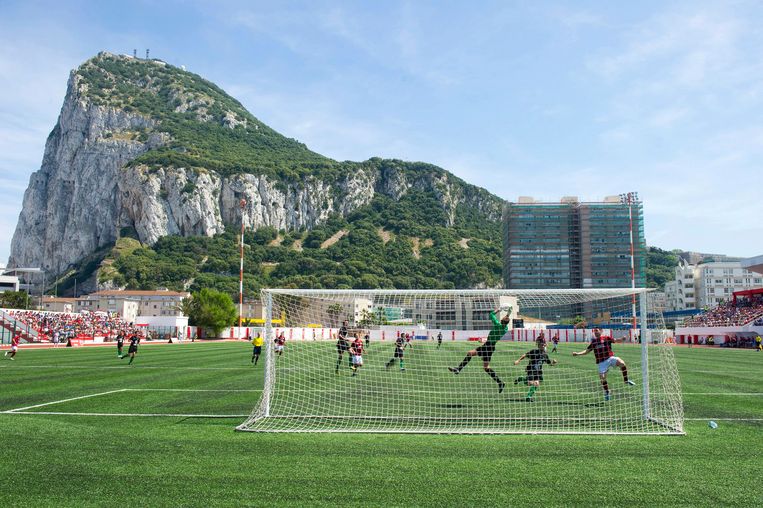 The Dutch national team will experience another scoop on Tuesday, after last Saturday’s female referee against Latvia. Play football in Gibraltar, the British crown colony of glorified amateurs, with clubs such as Glacis United, Bruno’s Magpies and Europa FC, all playing in one stadium, Victoria Stadium.

National coach of the Dutch Juniors Erwin van de Looi, who played against Gibraltar in the qualifying series for the European Championship: ‘Football is played all day in that one stadium. The whole competition is there, also for the women. ‘

“I’ve been told that sixty sports are practiced,” said Uefa board member Michael van Praag, whose portfolio Gibraltar belonged. ‘Spaniards have kept the border closed for years. The people could not leave the peninsula. They had nothing to do and were stuck. They read a book, they founded a boxing club, a darts club. This is how countless sports clubs and competitions have arisen. Sixty sports, on a piece of land from nothing. ‘

Gibraltar is British, with nearly 35 thousand inhabitants, living from tourism and trade, among other things, with a famous rock with monkeys. Almost everyone has now been vaccinated against the corona virus, the cafes and restaurants reopened last week. In football, Gibraltar is number 195 of the FIFA rankings (Netherlands 14), after difficult access to the international associations. Gibraltar gained access to Uefa membership through the CAS International Sports Tribunal. “Then Fifa could no longer refuse them.” Sepp personally visited Blatter van Praag to finalize the membership of the world federation in 2016. The rock with monkeys is especially famous. ‘They bite and grab you by the neck. It’s not that nice. ‘

Every day thousands of Spaniards cross the border to work in Gibraltar, in hotels and in the hospitality industry. Everything is compact, small and built close together. In the ‘Treaty of Utrecht’ from 1713, Gibraltar was ‘definitively’ transferred to English hands. Spain still contests that status every now and then. Van Praag: ‘That was spicy, until recently, with two EU countries. Spain has already closed the border a number of times, in protest, and there is only one passage. ‘

Van Prague has been to Gibraltar a few times. ‘You land on a fairly short track. Then they have to close barriers, because traffic from Spain has to drive over the runway to get to Gibraltar. ‘ The stadium has been significantly improved. ‘I was involved in that. There was also an option for new construction: south of the rock. That was a fantastic place, where you could see Morocco in good weather. But then it turned out that that place would be right next to an army firing range. They then decided to renovate the old stadium. It now meets the standards. ‘

The pitch is not very good artificial grass. “It is an amateur accommodation with small changing rooms,” says national coach Frank de Boer. The goal is to score as often as possible, especially now that the Netherlands lost to Turkey in the World Cup qualifying series and only won 2-0 against Latvia. The goal difference can be decisive. De Boer will not, however, set up an excessive number of strikers. ‘In today’s football it is all about a lot of movement, about a high pace, so that the opponent cannot catch their breath. Then we have to be able to score at least five times. ‘

In the record game against San Marino, almost ten years ago in Eindhoven, it was already 3-0 after more than fifteen minutes. That is often the remedy for small countries: score quickly so that, as De Boer puts it, ‘the heads hang.’

Midfielder Frenkie de Jong is looking forward to the game, although there is little honor for the full-professional to achieve. According to public opinion, a low score has failed, if a lot of goals are scored, it is said that the opponent cannot do anything about it. ‘Football is always fun. You can also enjoy a match like against Gibraltar and get a good feeling, if you show nice combinations, for example. ‘

The Orange trained for finishing on Monday and De Jong, not a player of many goals, was well on track. ‘I don’t necessarily have to score a lot of goals. The point is that you score often as a team. An attacker will easily think: oh, I can pick up my average. That’s good, but you can’t be too selfish. ‘

De Boers colleague Erwin van de Looi was especially surprised when he visited. ‘We arrived in Gibraltar on a large bus. Then we had to go in small vans, otherwise you won’t get through those streets. At one point it was an unbelievable noise. Behind the goal is a runway. When we trained, technical director Nico-Jan Hoogma of the KNVB just arrived by plane. You are then completely shocked by such a plane, 100 meters from the field. ‘