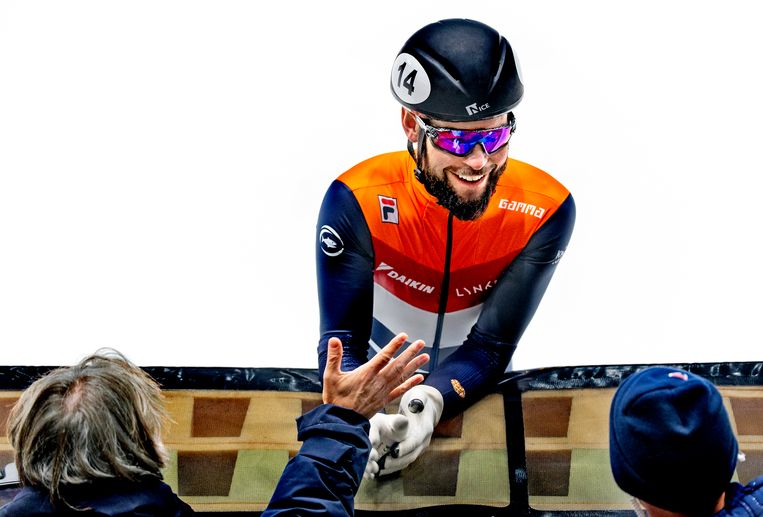 Relieved? Sjinkie Knegt gets the question four or five times after his silver medal at the World Cup in Dordrecht. For the first time since 2018, he is again taking home prizes at an international tournament, so it seems like a rhetorical question. But the Frisian is not going to go along with it. “No, no, no relief, but it’s a nice bonus.”

The clenched fist after crossing the line in second place in the 1,500 meters is much less hypothermic. Knegt (32) comes from a long way, has something to prove and certainly hadn’t done that this season.

After his fire accident at the beginning of 2019, the first question was whether Knegt could get back to his old self. He has recovered physically, but in the meantime the competition in the men’s short track has increased. So now the question is: can the 2015 world champion (four camp) still compete for the prizes in this Olympic year?

It certainly didn’t seem like that at the first World Cups this year. “There were some good moments in between,” he recalls. “In Japan I drove well, but in Hungary it was just very, very jerky, yes, that is true.”

So much that he would not participate at all in Dordrecht at the fourth World Cup of the year. National coach Jeroen Otter is not someone who takes reputation into account, he mainly looks at performance. And Knegt did not stand out with good races, but mainly because of penalties, whether justified or not. Only when Sven Roes dropped out with an injury, Knegt was allowed to start.

In the semi-final of the 1,500 meters in Dordrecht, Knegt lingers in the back for a long time. Consciously, he will explain afterwards. He waited for the moment to fall silent and he could strike. He does that in a fabulous way. In the penultimate lap, he moves from place 5 to 1 with a smooth movement from the outside in.

‘We saw something of Sjinkie’s old style there again’, analyzes Otter afterwards. To immediately add that the old Knegt is no longer enough these days. ‘If you do what you did, you will get the results of the past. He once won the 500 meters at the World Cup in 41 seconds, today they are 39.8. So he will definitely have to change things up a bit to be able to take another step in the coming months.’

Knegt already took his last world titles in 2017 (500 meters and relay), followed in 2018 by Olympic silver in the 1,500 meters. Then it was quiet. After the accident, he did not skate at all for over a year and there were few competitions last year because of corona. His status in the Dutch team is no longer the same as it used to be. With the men, Itzhak de Laat performed much better this year: in the 1,000 meters he already won silver and bronze at the World Cups. In Dordrecht he stranded in the semi-finals.

‘I miss the flexibility’, says Knegt. “One day it’s there, the next it isn’t.” The many disqualifications – which are handed out when short-trackers deviate from their track and hinder others – have everything to do with this, according to him. ‘Because things just aren’t going well, you have to take a risk. I don’t want to get into those positions, I want to be better than that.”

According to him, the success in Dordrecht came because he did not do strength training for a while. He discovered it by chance: it was not possible at the World Cups in China and Japan because of the corona measures and he felt that he was going to skate better. When he started hanging on the weights again, it went less well.

“Obviously I did everything I could this summer to close the last gap with the competition,” he explains. “And I also noticed that I was getting stronger physically, but it turns out that it doesn’t work with skating. So we’re going to reduce that and approach it in a different way.’

In the run-up to Dordrecht, Otter already gave permission to stop strength training. “But I think it’s also a bit in his head. At some point, of course, you start looking for anything and everything if it doesn’t work. But let’s take a look. Without strength you get nowhere and without flexibility Sjinkie gets nowhere.’

The coach ‘of course’ doubted whether he would see the old Knegt again. “Everyone has an expiration date and it’s been sour for a while. But at least he showed something today and I hope that gives something to hold on to.’