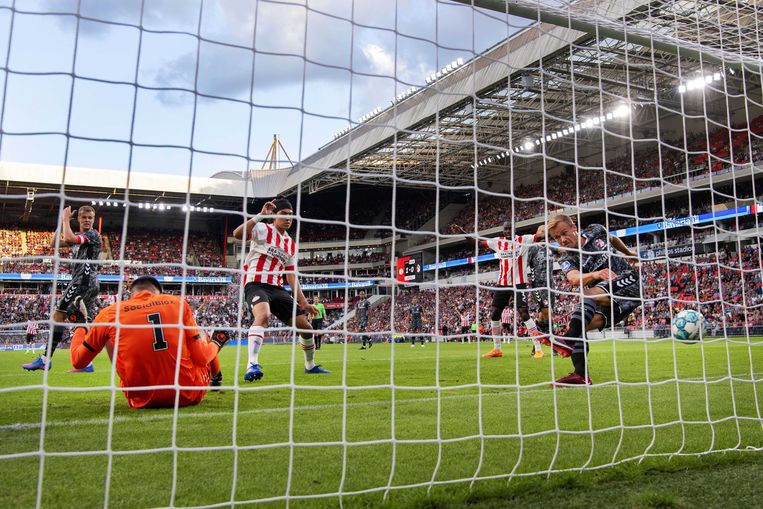 Emmen is ‘very much looking forward’ to the return to the Eredivisie, so it sounds from many throats. The only professional club from Drenthe became champion in the first division last season and can immediately visit title pretender PSV, on a cloud-free, but not sweltering Saturday evening.

During the journey of 250 kilometers memories are recalled. Emmen was slaughtered once in Eindhoven (6-0) in previous years, but during the other five meetings PSV managed to give a tough day. Coach Lukkien, already two promotions and a relegation with Emmen, only saw a few reinforcements from his own network dock this summer, but is still very confident. PSV is located in Emmen.

The Drenthe are also off to a good start, the first chance is theirs. The fact that PSV already counterattacks via Johan Bakayoko seems to be an industrial accident. The heads stay up. But then in the 26th minute follows a crazy goal, the repetition of which is broadcast three times on large screens in the Philips stadium. With each repetition, the laughter gets louder, in the end it’s a sort of gasp. The goal was hurled directly on social media by broadcaster ESPN with the accompanying caption: ‘Already the most clumsy own goal of the season’.

It’s a tweet that spreads at lightning speed, as is often the case with outrageous own goals, usually cut from amateur football matches, the distant past or obscure competitions. It is then difficult to follow the match, even though PSV runs out to 4-0 via two goals from Cody Gakpo and Ole Romeny scores once. Watch that own goal over and over again. Who does what now? How exactly does that ball roll? How can four professional players from the same club achieve this? In a time where endless training is done on standard situations?

PSV gets a free kick about ten meters before the left tip of the Emmen penalty area. PSV back Max kicks the ball with a twisting curve to the second post where the country’s best header, PSV striker De Jong, has crept to. But the spinning ball lacks length and height. Midfielder Vlak, who stands between De Jong and the post, sees him coming towards him, at knee height. Just use the knee, Flat thinks, but he hits it so wrong that the ball sails towards the goal mouth.

No worries. Goalkeeper Oelschlägl is attentive and taps the ball away, but it ends up on the hip of Emmen defender Hardeveld. With a strange carom, the leather now rotates along the lying Oelschlägl on the inside of the post, before rolling painfully slowly over the goal line. But here comes Emmen midfielder Kieftenbeld, one of the few acquisitions with a lot of experience in the Eredivisie and the English Championship.

Kieftenbeld has no one near him, but with his back to the goal, he doesn’t notice. He hurriedly turns around and half falling he hits his right leg with his lesser left leg. The ball seems to think three times over, now I’m going in too.

Kieftenbeld in particular will be a complete disaster, in the very last minute PSV substitute Sávio hits his knee. He stumbles out of the field. There is ‘play in his cruciate ligament’, is the diagnosis, and a very long absence threatens. He is therefore logically not available to the media afterwards.

Goalkeeper Oelschlägl tells outside in front of the team bus that he hardly knew what was happening. Captain Veldmate, who was on top of it, understands that the word ‘colderiek’ is being used. With a smile: ‘It will go viral. With some music underneath. I understand that as a neutral spectator you had to hold back your laugh. But this happens everywhere, even at a higher level.’

Inside, PSV commissioner Hans van Breukelen confirms this. The illustrious former goalkeeper of PSV and the Dutch national team immediately quotes an international match against Austria in 1984, where Michel Valke stands next to him and can easily shoot the ball away, but rams into his own goal through the bottom of the bar.

Van Breukelen is happy that ‘going viral’ was still an unknown concept at the time. ‘Otherwise, my moments would have passed around the world. This can happen to anyone.’

Trainer Lukkien is particularly disappointed with Kieftenbeld’s serious injury, who ‘had an excellent preparation and really added something to Emmen’. ‘Worthless.’

The 2-0 will be missing in the debriefing. Not so much out of piety with the protagonists Kieftenbeld, Hardeveld and Vlak, but simply because there is little to analyse. Smiling: ‘A ball miraculously lands on the goal line and you have to shoot it. Finished.’

Veldmate cheerful: ‘You can simply never do this again, even if you wanted to. So one thing is certain: this will never happen again like this.’