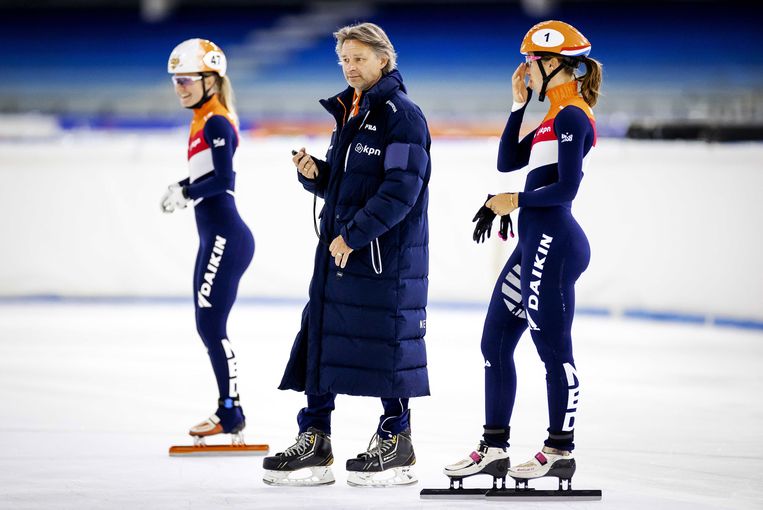 Not Suzanne Schulting’s golden race at the Pyeongchang Games four years ago. Also not the world title of the relay men in a frenzied Ahoy in 2017. No, Jeroen Otter experienced the best half hour of his coaching career during an ordinary training beforehand. It was on Thursday 12 August 2021, half past ten in the morning, on the short track track in the middle area of ​​a half empty Thialf.

The short track national coach still remembers exactly. A relay exercise is planned that day. A fairly intensive workout, but not too crazy. Four groups of five skaters cross the 111.11 meter long track. Every two laps they push another one going. First a series of five reliefs slowly, then again five reliefs hard. It goes on like this for half an hour. Otter rides the lane on his ice hockey skates, observes.

After the first series of fast laps, the training has been going on for about five minutes, it is already clear to Otter that something special is about to happen. He sees it in the faces of his riders, in their posture. ‘It became half an hour of open-mouthed enjoyment of what was being done. How they passed, challenged each other.’ Otter, his assistants and the skaters themselves enjoy it.

Everything falls together that morning. The ice, which Otter and his staff are experimenting with, is fast, but also offers the riders on their narrow irons grip. And, not unimportant: everyone on the track is fit.

There are large television screens on the boarding that show the lap times of the short track drivers live. It’s getting faster and faster. ‘First a lady who drives 8.65, then one who shows 8.63, then 8.61. That is amazing.’ The men accelerate. ‘They responded by driving 8.3’s.’ These are lap times that even make opponents gasp in international competitions.

The athletes cheer each other on. There is much more momentum in the four groups than they expected, much more grip on the ice too. ‘It was not only skating fast, but also passing, accelerating. And then the superlative, every time.’ Searching for the limit of what is feasible in the tight bends, the limit turns out to be further and further that morning.

‘During training sessions I often have athletes who do something great, but also always others who are disappointing. Now it was roughly bam, bam, bam, bang, bang, bang.’

Everyone feels that something special has happened. The lap times are all recorded and when Otter picks them up later in the day to get a closer look, he is again amazed. “Jesus, how is this possible?”

Because everyone, without exception, shows their best that day, according to Otter, it is a euphoric half hour. By definition, this does not happen in competitions. If one wins gold, the other is sadly next to the podium or is the pain after a fall. “That makes it hard to cheer because there are always others who have done less,” Otter says.

That will be no different from Thursday, at the four-day World Cup competition in Dordrecht. If only because 21-year-old Sven Roes suffered a serious ankle injury the day before the tournament and is missing. Otter is used to it. ‘You always have wow moments and ow moments during matches.’

For days, Otter draws energy from the happiest thirty minutes of his career. And motivation, which the short trackers also experience. The lightning-fast rounds serve as a target for subsequent training sessions. ‘Holding up that carrot is important. If you can bring out a training like this once in a while, that gives a huge boost of course.’

Motivation is a core concept in Otter’s training approach. He knows that no one is self-motivated all year round, even though the outside world sometimes seems to expect that from top athletes. ‘But they are just boys and girls who happen to be very good skaters and who have all kinds of issues that you and I also have.’

Otter is always looking for new ways to stimulate his pupils. Years ago it was a painting, made by his wife. ‘A Picasso-esque short tracker, it said.’ Whoever drove the fastest lap time ever on the old training track, got the painting home. Former short tracker Freek van der Wart still has the artwork on the wall, the national coach suspects. “He always went for it one hundred percent.”

Last year he used gift cards. Anyone setting a personal best, whether it was a full lap, acceleration or a starting lap, saw the trackside television screens lit up in bright colors. “Then everyone would know you had won a ticket.”

The gift vouchers, which can be exchanged at the country’s largest online store, were worth 25 euros. “It had an effect comparable to a World Cup medal. And the high earners in terms of performance thought it was the best. Sjinkie Knegt and Suzanne Schulting were on top of it.’ It’s that no coupons were at stake on August 12, otherwise Otter would have had to hand out a bunch of them.

Vouchers or not, the summer top training gives long-lasting self-confidence. Whether in other training sessions or in competitions such as the coming days in Dordrecht. ‘The athletes know: we’ve done this before. What’s to stop us from doing it again?’