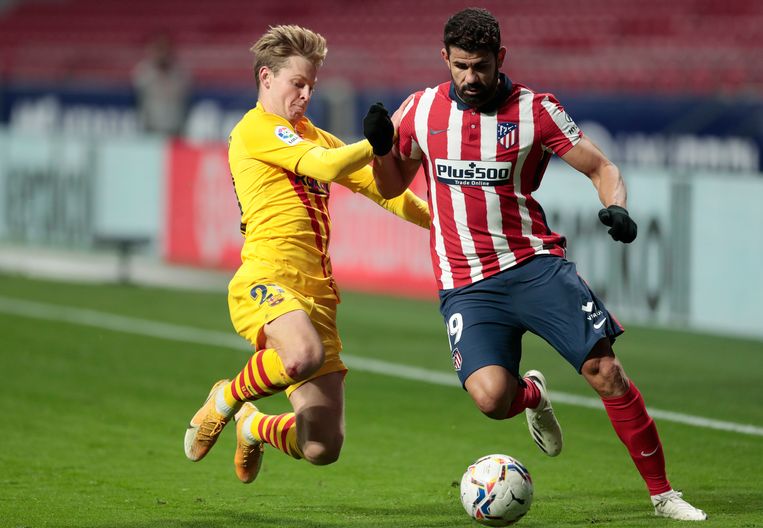 Barcelona seems to be a club in decline and that does not leave Frenkie de Jong on the field unaffected. In the lost top match against Atlético Madrid, he hardly appeared in the play.

Former Barcelona star Xavi Hernández, arguably the best midfielder in the Catalan club’s illustrious history, was lyrical about Frenkie de Jong last week. “I see him as a footballer who can indicate a new era at Barcelona.”

With Lionel Messi as a teammate and Ronald Koeman, the national coach under whom De Jong became a star in Orange, as the new trainer, the right conditions seem to be the right conditions to take the top club by the hand. Like De Jong has also done at Ajax and the Dutch national team. Still, it is not yet golden times for Barcelona, ​​which is only eleventh after Saturday’s defeat against Atlético Madrid (0-1).

Trainer Koeman does have Messi and De Jong, but otherwise has an unbalanced selection. With Gerard Piqué (33 years old), Sergio Busquets (32) and Jordi Alba (31), the Spanish core around Messi is getting older. Koeman is experimenting with a trio of very young attackers – Pedri (17 years), Ansu Fati (18) and Trincão (20) – because the very expensive Antoine Griezmann (120 million euros), Ousmane Dembélé (130 million euros) and Philippe Coutinho (145 million euros) ) do not turn out to be the Messi helpers Luis Suárez and Neymar once were. A Barcelona unworthy start to the season is the result, with five points loss in the first eight league games.

In the top match against Atlético, the Madrid defense proved unable to pass through this wandering Barcelona. The Argentinian trainer Diego Simeone has turned the people’s club into a true goons. Since January 2012, the month in which Simeone started at Atlético, his side has the least passed defense in all of international top football. In 334 league matches under his leadership, Atlético only conceded 230 goals. Only one goal conceded per 131 minutes of play, and that over a period of eight years.

This unparalleled defensive success rarely translated into tangible prices. Atlético was unlucky to be a top Spanish team in the era of Messi and Cristiano Ronaldo. But with this Barcelona showing signs of real vulnerability, Atlético strikes deadly. For the first time in his eight years at Atlético, Simeone won a competition match with Barcelona, ​​the lead in the rankings is already nine points.

Against Barcelona, ​​the traditional 4-4-2 formation was exchanged for a 5-3-2 system. With three central midfielders and three center backs, Atlético closed the middle of the field.

Where Frenkie de Jong in the past Nations League tournament as a dribbler (16 successful actions), as a passer (70 passes per duel) and with his ball contacts (86 per duel) is the Orange player who is most often involved in actions in the field game, this tactic of Simeone at Atlético – Barcelona made him much less dominant in his role as midfield conductor.

Backs Sergi Roberto and Alba hit the ball more often against Atlético. Only once did De Jong use a dribble solo. To make matters worse, he had to complete the last half hour of the top game as center-back, after an injury to veteran Piqué. De Jong has the future at Barcelona, ​​but in the present it is a lot of work for the time being.