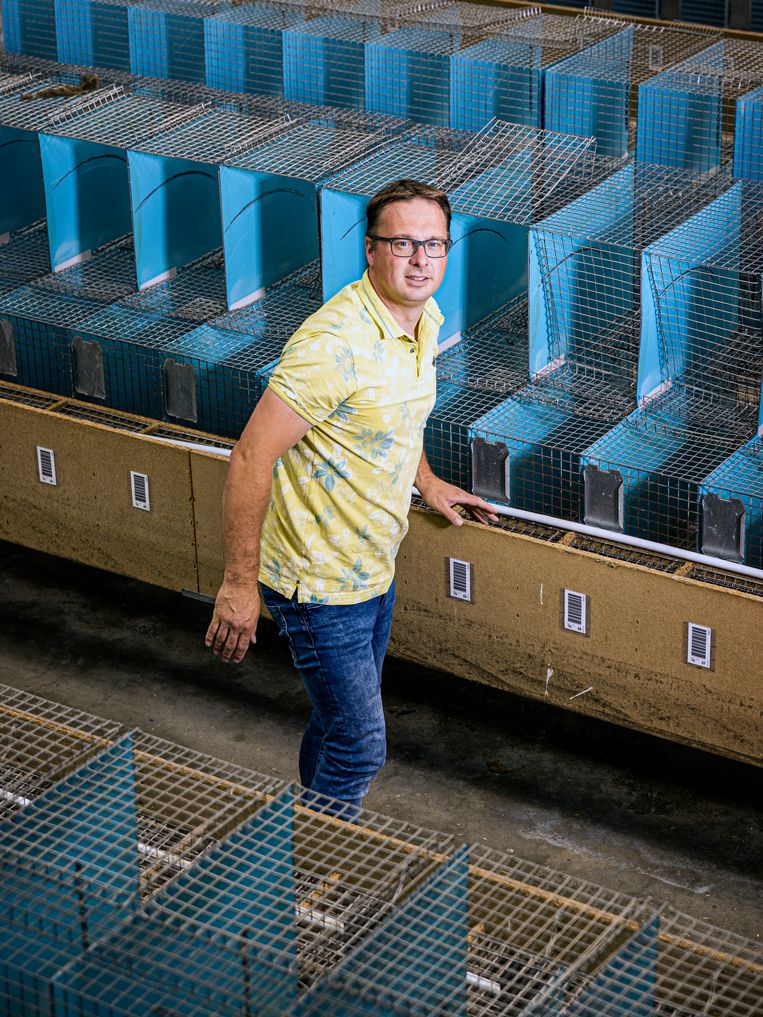 ‘I regularly receive calls from people who want something with my stable’, says ex-mink breeder Martijn van den Boogaard (43) between thousands of empty mink cages in the enormous industrial hall on his property in Beek en Donk. They want to saw wood, park old-timers or store construction scaffolding. “Even cannabis growers have approached me, twice. You think: that won’t happen to me, will it? But one even showed up on our doorstep at the beginning of this year.’

At the end of last year, the Brabant mink breeder was obliged by the national government to stop his company, just like all other more than a hundred colleagues in the country. His minks had already been culled in June. Because he was one of the two first mink breeders in the Netherlands whose company was infected with corona. The virus, which led to an almost unstoppable wave of contamination on mink farms, ended a controversial livestock sector three years ahead of schedule.

The strange man at the door asked: is the stable available, can I rent space in it? ‘He offered a hefty compensation per metre, wanted to pay black for three months in advance, but otherwise steered clear of the hot mess,’ says Van den Boogaard. ‘Then you already know it’s not right. Finally he said what it was about. A few hundred plants, it was called. Yes, that’s where it starts. I thanked him kindly and said goodbye.’

At the terrace table in the Brabant countryside north of Helmond, the former mink breeder also shows an email he received at the end of May from someone who presents himself as ‘freelance area sales manager’. This person writes that he is looking for space ‘for a client’ in sheds or industrial halls for shorter (three months) or longer periods. ‘Of course for a generous monthly financial compensation’, says the writer. ‘A colleague from real estate country gave me the tip to focus on the mink industry, since this group is now probably dealing with empty barns.’

Van den Boogaard, a young guy with an open, friendly demeanor, finds it unbelievable that this is happening to him. Sixteen years ago, he was forced to take over the mink business from his father. Day in and day out he has worked on ‘his own breeding stock’: dams that have puppies every spring with ‘the most beautiful fur’ in the colors brown, grey, black, pearl and cross (speckled). ‘All that work gone in one fell swoop’, says Van den Boogaard, who has to support a family with three young children. And then in this difficult phase of his life he also falls prey to dubious people who prey on his empty stable.

Mink farming has been the most maligned livestock industry in the country for decades. Have you never been bothered by that?

‘The public discussion about a breeding ban had been going on for a long time, even when I was just a child. I grew up with it. I didn’t know any better. Yes, we were under a magnifying glass. But mink farmers are used to these criticisms. We are used to rowing against the current. I often compare it to the discussion about nuclear energy. It has also been running for over 25 years. And lo and behold: recently things have suddenly changed again. The fact is that mink farming has always been a legal industry, until the beginning of this year.’

Do you understand all this criticism?

‘Of course everyone can have their own opinion. But actually I don’t quite understand. We took good care of our animals. We met the highest welfare standards, had the strictest rules in the world. In 2013, the cabinet decided on a breeding ban, mainly for ethical reasons, which would take effect ten years later in 2024. Keeping animals for meat is seen as a basic necessity of life. A fur coat is not a basic necessity of life, and breeding an animal solely for its skin is considered unethical.

‘But what difference does it make for what purpose you keep animals? You can also say: fur is sustainable, because it lasts 25 years. And a pork chop is gone in one bite. I have no problem with it, whether it’s meat or the fur or skin of an animal. Shouldn’t you be wearing leather shoes anymore?’

Was it a calling to become a mink breeder?

‘No not at all. I had no ambition to take over the company. I studied agricultural engineering in Wageningen. In the last year of my studies I was in New Zealand: doing an internship for three months and backpacking for three months. A wonderful time, but then my father suddenly died of a heart attack at the age of 56. I promised my mother to help her for a year. Then we would see: sell or rent? It became neither. I’ve stuck. I liked doing business and taking care of animals too.

‘It was an outdated company full of old sheds with runways and hutches – I called them gazebos. It was the cheapest way to keep minks. When the welfare rules were tightened up, I decided to have this stable built, a wide span, with larger night pens and running runs. It looks a bit like a garden center. That was already a bit of foresight: if there is ever a breeding ban, I can also do something else with it.’

And so the breeding ban came into effect. How did you like that?

‘Yes, that was very strange and I also thought it was very unfair. We were still finishing the barn. As an entrepreneur I thought: after this investment I can move forward for another twenty years. But I only got ten years left. The government did not give us financial compensation, but time. In ten years we could earn back our investments, was the thought. But forget it, that turned out very differently. Because that payback period was based on the fur prices in a peak year. After that, the market completely collapsed. Nothing came of that payback. Some colleagues stopped, others were so desperate that they took their own lives. All this should not cost the government a euro.’

‘We were in farrowing time, with 7,500 dams. There was suddenly an increased loss in the company: suddenly eight instead of two mother animals died in one day. I called the vet, an autopsy was done. When I saw those red lungs, I already knew it: corona. A day later on Saturday evening, April 25, the Ministry of Agriculture called: it is indeed corona. It was announced on Sunday. We were the second infected mink company in the Netherlands, after a company in De Mortel. It was decided to do further research first and not to clear out indiscriminately. However, the company was hermetically locked. We ourselves lived in a bubble.

‘The blood samples showed that 95 percent of the dams were infected. Almost all animals had produced antibodies. On 7 June there was clearing. That was very intense. Colleagues came to help kill all the animals. Suddenly it is completely quiet in the stable, where normally the squeaking and chattering of the puppies can be heard continuously.

‘But it was not completely unexpected. Research had already been done for six weeks, and the virus kept circulating in the barn. I kind of saw it coming. The drama was inevitable. Then one mink farm after another in the Netherlands became infected.’

Do you have any idea how the virus got into the stable?

“It sounds bizarre, but I was probably the cause myself. I had celebrated carnival for two days at the end of February and had minor symptoms of illness, such as flu and cold. My wife and mother were also found to be infected, as well as two permanent employees and two part-time employees. I probably infected all seven people who helped with the mating season, when we put the males with the bitches, and back again.’

But you didn’t think then: this is the end of business?

‘No, after a thorough disinfection I actually wanted to fill the barn again and continue until 2024. I had already signed a preliminary purchase contract with a colleague for new dams and males. You are in the annual cycle, so in January I thought I could start up again. I hoped that by then there would be a vaccine for mink. There is indeed now, developed in Russia, but I don’t know if it has already been used somewhere.’

What have you done since the cull last June?

‘In the summer and autumn I helped colleagues with the culling. You got paid for that, per hour. It went on and on. In Gemert, also known as the mink capital of the Netherlands, all twenty companies have been culled as a result of infections.

‘When the government announced the early end of the entire sector at the end of last year, I took a LOI course: programming and website development. I did an internship at a software company from January to the end of May. But when the weather got nice, it started to itch again. An office job like that is not for me. I want to continue with the company and the stable.

‘That building is there, seven thousand square meters in size and completely disinfected, ready for a new purpose. I’m thinking of a multi-company building or storage for caravans.’

How do you see the future?

‘That compensation scheme is coming, although it is still a lot of hassle. The lofts have been sold to a Polish breeder who wants to keep 150,000 dams in Kaliningrad (Russia, ed.). He has bought almost all mink pens in this region. That will be an unprecedentedly large company, twenty times the size of my company. You can bet that there is a different approach to animal welfare. That is harsh.

‘The biggest challenge will be to have the zoning plan adjusted. Because this plot now has a purely agricultural purpose. That will be a whole discussion with the municipality. If things don’t go well, it will take years and I can’t wait that long. Otherwise I won’t be able to earn it for my family.

‘Redesignation is also the biggest obstacle for many other mink breeders at the moment. No, I don’t want any more animals. As a farmer in the Netherlands you are beaten flat with rules that keep changing. The government has proved to be an unreliable partner. We don’t want any more where shit comes out.

“But I’m still young and I’m trying to stay optimistic. A lot has happened in the past year, my life is turned upside down and I see little future prospects. All I can say is that I’ve become a year older and eight kilos heavier.’


‘Actually, we do the same as when we still had minks. That is the advantage of a slightly larger family business. I had two permanent employees – so we took turns taking vacations. Last year we went to a campsite in Luxembourg. The children are still small – 1,5, 4 and 5. They don’t really care where we are. Then you can drive all the way to the south of France, but their experience at the campsite remains the same. In August we are now going for a week to a cottage at a nature campsite in Germany, just across the border near Hardenberg. We also make some day trips, such as to the zoo.’