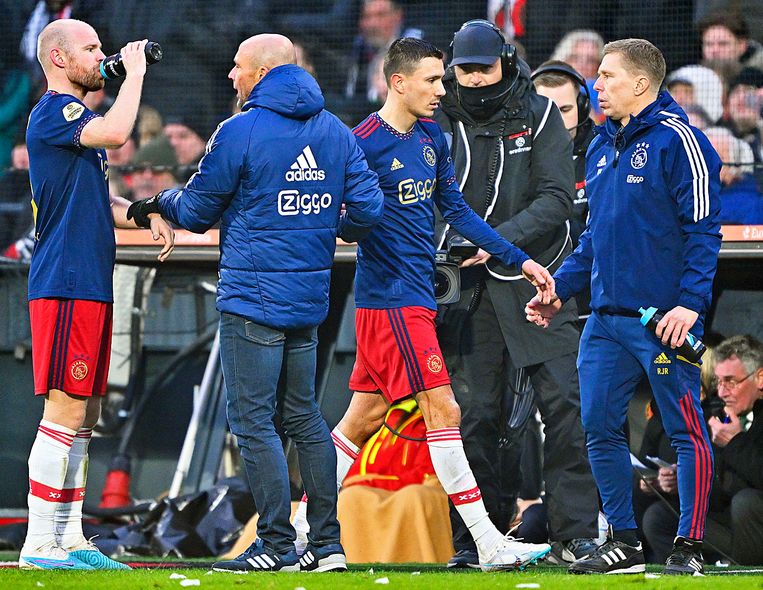 Along the road to the Feyenoord stadium, black-clad men are on the lookout for the Ajax players’ bus. Last year that bus was pelted with fireworks, but thanks to a clever exchange trick nothing is thrown this year. The selection of Ajax, with former Feyenoord player Steven Berghuis on board, slips past the men unseen in a white-blue bus with P&O Ferries printed on it.

The most terrible disaster scenarios were raised in the run-up to the Classic, the first in which Berghuis will play in a full Kuip again since his controversial switch in 2021. The former captain of Feyenoord has not been applauded by almost all Feyenoord fans since his transfer to arch-rival Ajax , some openly hate him.

On social media, the insults directed at Berghuis screeched around. A week earlier at FC Groningen – Feyenoord, disgusting anti-Berghuis songs sounded from the Feyenoord boxes. The Feyenoord club management decided to hang nets around the entire field, the police took extra measures. Eleven members of the hard core of Feyenoord were arrested two days before the match, although it was not said that this had a direct link with the frequently threatened Berghuis.

A hell of a flute concerto

De Kuip is full early. When the Ajax players start their warm-up, a hellish whistle concert sounds, louder than usual with this poster. Berghuis’s slender legs are tucked into long trousers. He is not warmly sandwiched between teammates, but rather alone in the middle, his head up. The house DJ puts on a Feyenoord song extra loud (We are Feyenoord, the big Feyenoord) that drowns out chants.

The whistle sounds again when stadium speaker Peter Houtman reads Ajax’s line-up softly and quickly, and increases considerably in volume when ‘Steven Berghuis’ passes by. It also sounds during the match, every time Berghuis touches or wants to touch the ball. ‘Steven is a cancer jew, just die’ can be heard from a number of subjects, but the audience mainly focuses on supporting their own team, as was urgently advised in advance by Feyenoord players Kökcü and Bijlow and Feyenoord coach Slot.

As one of the few Ajax players, Berghuis remains calm in possession, acts thoughtfully, although he loses more ball than usual. He also loses more duels than he wins. Direct opponent Wieffer is close to him. An assignment from Slot, because he thinks Berghuis is ‘an excellent player’.

Yet Berghuis does not seem to be weighed down by the hostile atmosphere for a second. He fanatically chases Feyenoord goalkeeper Bijlow, who is right in front of the hard core. After half an hour he urges teammates to play football more calmly.

But a few minutes later he himself gives a risky pass with the outside of his foot to the insecure Ajax back Sanchez, who is picked up by the eager Feyenoord back Hartman. Hartman evades the approaching Berghuis, plays Paixão who rams the ball beautifully from a distance into the corner, as Berghuis himself did so often in the past in De Kuip.

After the break, Ajax enters the match a little better. Berghuis does not cheer after Klaassen’s 1-1, as most Ajax players do not do. The midfielder was taken out shortly afterwards, in the 72nd minute. The flute concerto is relatively soft, the audience still seems taken aback by the equalizer.

Afterwards, Berghuis speaks to ESPN with a straight face and extensively denounces the role of a number of media (het General Journal, Jinek) and media personalities (René van der Gijp) in fueling the hostile atmosphere on social media leading up to the match. ‘This week has had an impact on me, but also on my family. I think people in the media, especially with such a wide reach, should think before they speak. I don’t have Twitter and Facebook, but even my grandmother sent me hate messages this morning. That’s why I’m here. People need to know what this has done to me and my family.’

He called the atmosphere in the stadium ‘fine’. “Whistling is okay. They are disappointed that I left. That’s okay, rivalry is good. You enjoy the field. I liked it, a nice match. As it should.’

Then he re-enters the P&O Ferries bus. At his current and former club, they are delighted with how the afternoon went, but they hope that a substitution trick with the team bus will no longer be necessary to play a football match in the future.