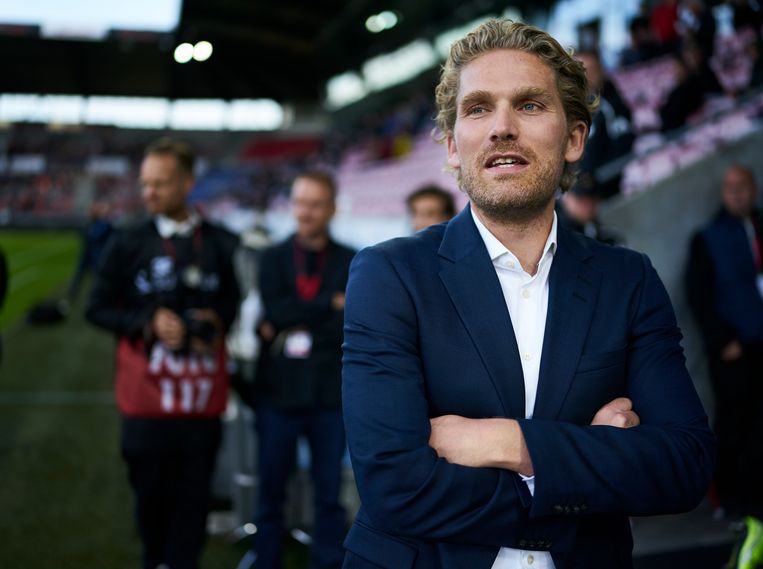 Participating in the Champions League for the first time turned out to be a ‘pace shock’ for his club Midtjylland, as chairman Rasmus Ankersen also experienced. As fast as top football goes in practice, phew. First it was 0-4 against Atalanta Bergamo at the debut, then 2-0 at Liverpool, then 1-2 at home against Ajax.

Ankersen feels that his team is getting used to the pace, that the level is rising and the first point in the first year of the Champions League is imminent. “We want a result against Ajax,” he said a few days before the first game in Denmark. Wednesday is the second mutual match, in Amsterdam.

Ankersen looks at Ajax with admiration, how the club in the Netherlands is a force apart ‘with great strength on the transfer market.’ Anchors travels a lot. He is director of football for Brentford, in the Championship of England, and therefore chairman of Midtjylland.

Ankersen can be hired as a speaker and gives lectures to thousands of spectators. He is popular for his views, smooth appearance and cool tongue. He grew up at Midtjylland, especially after the merger between Ikast and Herning Fremad. A club from Jutland, from the town of Herning with 50,000 inhabitants, is knocking at the gates of big football. ‘We have only been around since 1999 and the driving forces behind the club have been the same people for years. That is an advantage. We never have to think: oh, how well we did that in 1976, shall we do it again, because in 1976 we were nothing.

Coach for the insertion

The club is owned by the Briton Matthew Benham, who is also the big man behind Brentford. Benham amassed capital in the gambling world, and with his statistics company, Smartodds. All sports data is available and contains useful information, the basis for innovative thinking at the club. This includes attracting certain players with good data. Or seeing progress in details, for example by hiring a coach for the insertion. Thomas Gronnemark was already active with the opponents Liverpool and Ajax.

Always coming up with something new, looking for improvement, discussing with each other, daring to be different and modern. Ankersen: ‘Last season, when we were well ahead and were looking for new inspiration, we came up with a new ranking. We started comparing ourselves with clubs like Lazio, Club Brugge and Slavia Prague, more or less comparable clubs abroad. We made a virtual ranking and compared the results of those clubs next to ours. ‘

Ankersen wrote a few books. One of the titles is: Hunger in Paradise. It’s about the effort it takes to remain eager for those who are right at the top. He likes to step into the loser’s shoes. Because the winner may be saturated, while the number 3 desperately wants to be number 2, and the number 2 number 1.

Midtjylland has now broken the hegemony of the clubs from Copenhagen and has won three league titles in the past six years. ‘While our player budget is 12 million euros, considerably less than Copenhagen’s. We have surpassed the big clubs in our country, partly by thinking differently. We now want to get even more out of the possibilities commercially, through close cooperation with companies. To make our knowledge available to developments outside of football. ‘

After the season, he expects to lose players such as Cajuste and Onyeka, because they are in the window in the Champions League. But that’s the way it should be. See Ajax. Then it is important to bring other, preferably better, players. It is strange to know retroactively that such a club of calculation attracted a player like Rafael van der Vaart, who was certainly unpredictable at the end of his career, a few years ago. He wanted to play football close to girlfriend Estavana Polman, handball player at Esbjerg.

Ankersen sees the bright side. ‘We hired Rafael. Betis paid his salary. We didn’t take any financial risk with him. He hasn’t played much football and hasn’t left that much of an impression during matches, but I’m glad he was with us. We really wanted to get a player from the absolute top, if only to confront our often young players with a real top match. Rafael has shown this especially during training. They could see up close a level they had never seen before. ‘