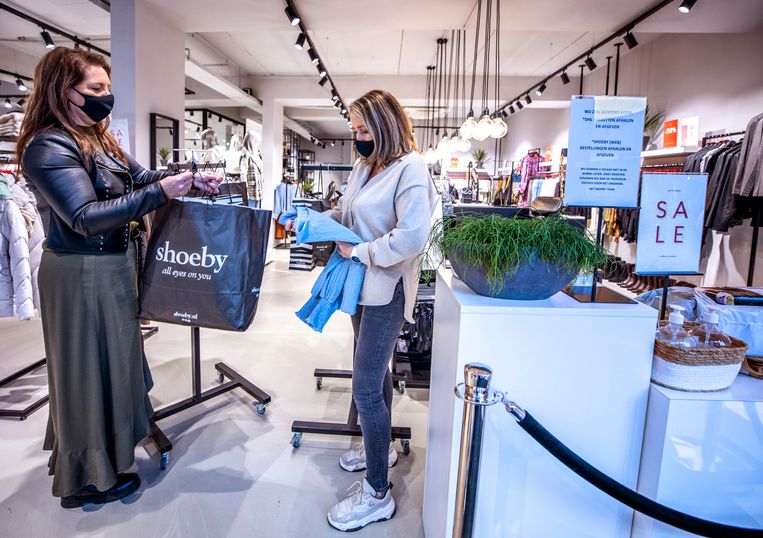 In Vleuten, Oosterhout or Purmerend, Shoeby’s 230 fashion stores are only open as a collection point for parcels during the strict lockdown. Founder and former director Mieke van Deursen (59) calculates that the fashion chain has lost ‘tens of millions of euros’ in 2020. And that precisely during the 40th anniversary of the family business with 1,500 employees.

The government support packages (NOW) only cover 40 percent of the wage costs at Shoeby, says Van Deursen. The fashion industry is going through peaks and troughs, Shoeby is unable to demonstrate the necessary 20 percent loss of sales in some quarters. “Normally our top month is December, so we got a huge blow after the second lockdown.”

As a major player in the fashion industry, Shoeby is not eligible for the Fixed Cost Allowance (TVL), which is intended for small and medium-sized businesses. ‘Only a few franchisees can use it,’ says Van Deursen. The company also has millions of euros in stock. The warehouses at the head office in Rosmalen are overflowing and the next shipment from China is already on its way. ‘Where do we leave it? In three months, that collection can be sent to the clothing bank. ‘

The clothing sector is cyclical. What is currently in stores cannot be sold after the lockdown has ended. ‘What we are now forced to sell online is sold for half the price’, says Van Deursen, via a Zoom connection from Rosmalen. “It’s clothes from a few months ago, every margin has disappeared.”

The government has already announced new bailout packages as the lockdown has been extended by three weeks. Van Deursen sees only one solution, full compensation for stocks. ‘Stock is our lifeblood, which determines pricing policy and our margins.

‘We are constantly buying. I have already ordered the winter clothing for 2022, while this year’s is still in stores. We are in a dilemma and are constantly advancing. It suits our industry. But as long as the shops remain closed, stocks will pile up. ‘

The first lockdown last year invited new alternatives, now absenteeism has doubled at Shoeby. ‘The second lockdown is also a lot harder mentally,’ says Van Deursen. ‘I want to prevent our employees from falling into a depression. Working from home leads to a lot of stress, everyone is under high tension. ‘

For Shoeby’s 230 branches, management has to enter into a conclave with their landlords, who are now much less willing to suspend the rent than at the first store closure. Van Deursen: ” During the first lockdown they still thought along, now they show no leniency and slam the door. Politicians must put pressure on the banks to remain solution-oriented in the provision of credit to landlords. It’s a painstaking process. Moreover, our 300 suppliers are also worried, there are limits to their solidarity. ‘

With this, Van Deursen also expresses the industry’s cry for help. The Vakcentrum, the trade association for independent retail entrepreneurs, calls on the government on Friday to increase the stock compensation to 90 percent. The TVL must also be accessible to all retailers. Following Van Deursen, the Vakcentrum states that the banks should not be restrained in extending financing, the lifeline for these entrepreneurs. And, according to the Vakcentrum, new legislation must be introduced that makes a quick rent adjustment possible.

Van Deursen points to a wide variety of costs. Shoeby also incurs much higher logistical costs during the pandemic. The company does business with India, China and Turkey, among others. ‘Transport has become five times more expensive than normal due to all the corona measures. We already have a lot of clothing shipped, because of course much less is flown. And large carriers with monopoly positions are driving up the price. ‘

Shoeby stores are only open to collect parcels. Clothing is everywhere, but the customer is only allowed to look at it at the front door. The customer may pick up his DHL package at Shoeby, but not the clothing ordered online. The company must have it delivered to your home by courier.

Van Deursen: ‘It is now one of our largest cost items, because the customer is not allowed to return clothing. Even then it must be sent and that again costs us 3.50 euros per package. Do the math with thousands of parcels in 230 stores. You can pick up the steak at a restaurant, our customer is not allowed to pick up clothes in a clothing store if it has not been sent first via DHL. I think it’s a strange twist in the corona legislation. ‘

Shoeby wanted to open another ten branches in February. But also in the flourishing chain is the fat of the bones. Van Deursen fears that it will have to cut costs even more if the lockdown continues for longer. ‘I am very concerned. You see your life’s work slip through your hands. I realize that the government is facing hellish dilemmas, but I also feel abandoned as an entrepreneur. ‘

‘We really have to be open again in March, otherwise the consequences will be incalculable. But it does not only apply to us. There is a threat of enormous clearing and a hardening of society. If you want to keep nice cities with a great diversity that makes shopping so fun, then politics must keep retail in the Netherlands afloat. And that goes much further than just a new support package. ‘


The corona mystery: emergency bells ring everywhere, but no one goes bankrupt
The government will come up with new billion-dollar support next week and the number of entrepreneurs going bankrupt is even dropping. Yet, according to shopkeepers, café owners and other entrepreneurs, it has been five to twelve for months now. How is that possible?