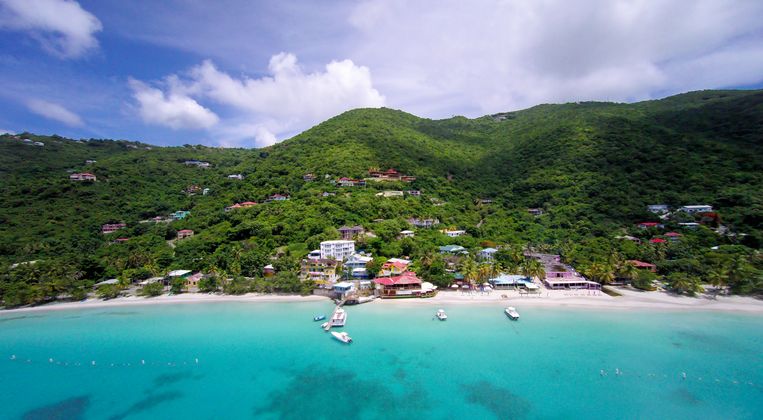 In the middle of the Caribbean Sea, east of Puerto Rico and north of Sint Maarten, there are more than fifty little pieces of land. Together they form the British Virgin Islands, an overseas territory of Great Britain. The largest island, Tortola, was initially Dutch, until the British took it over in 1672. As a result, the main language there is English and God Save the Queen the National anthem.

Collectively, the islands have a population of 37 thousand, about the same as the municipality of Moerdijk. It generally does not get colder than 25 degrees. With its pristine white beaches and azure blue sea, tourism is an important source of income for the inhabitants. About 45 percent of gross domestic product (GDP) comes from tourism activities, the calculated C.I.A. Most tourists come from the United States.

Virtually the rest of the economy is made up of financial services. Every year 40,000 new companies are added, says Jan van Koningsveld of the Offshore Knowledge Centre, in Fidelity.

That’s no coincidence. In order to stimulate the economy on the islands, the government decided in the 1980s to become more attractive for financial services. She did this, among other things, by not allowing companies to pay profit tax.

What also makes the islands attractive to letterbox companies is the excellent hiding place between the palm trees. The Virgin Islands does not have a commercial register that is publicly available. Who the shareholders and director of a company based on the islands are remains unknown. Ideal for any company or wealthy private individual to disguise wealth.

The islands did not remain secret for long for elites. In the 1990s, the money routes to the islands in the Caribbean also started to catch the attention of Dutch investigative services. Van Koningsveld was working for the Fiod at the time. He saw that a remarkable number of fraud and corruption cases could be linked to the Virgin Islands, he says in Fidelity.

The archipelago went unnoticed by the general public until the revelations of the Offshore Leaks in 2013 and the Panama Papers in 2016. To date, 400,000 foreign companies have settled on the islands, reported. Cayman Compass in 2019. This makes them the largest tax haven in the world.

On the list of the Tax Justice Network the Cayman Islands and Bermuda, two other British Overseas Territories, round out the top three. Number four on the list is the Netherlands. The question is how long the British Virgin Islands will continue to top the rankings. A majority of the European Parliament wants to put the archipelago on a blacklist of tax havens. That would mean stricter controls, where the islands were previously protected by Britain.