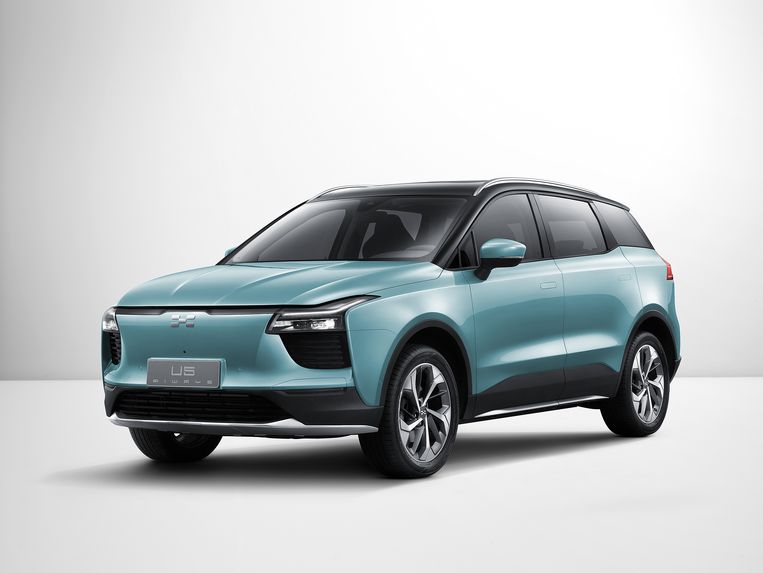 Many Europeans chuckle about Chinese cars: remember that Landwind that came to the Netherlands a decade and a half ago? Life-threatening thing, the ANWB thought at the time. Crash tests showed that there was little to be said about this.

The crash tests of that time left not only the Landwind in wrinkles, but also the image of the Chinese car industry. A boom that still resonates fifteen years later: many people from the area around Blik responded compassionately to the announcement that we had a Chinese car to borrow.

No wonder the importer insists on the safety of this car. Six airbags, high-quality steel, a battery housing that survives even a ‘significant impact’. Safe safe safe. Still, the U5 received only three stars from EuroNCAP in a first crash test, where most brands get five on their slippers.

Another worthless thing? Not too bad. Occupants are indeed well protected in a frontal collision. There the U5 almost gets the maximum score. Only an encounter with a pole did not end well and the electronic aids were insufficiently developed at the time of the test. Not a glorious score, but the U5 is by no means dangerous.

What is the U5? A spacious, reasonably affordable, by no means unsightly electric SUV with a large battery and a pleasant amount of power. Just think of that with the Germans, who ask at least a few grand more for something comparable.

So the U5 is fine on paper. But the everyday world is not the one in the folder. Because the U5 drives fine, but the details go wrong. Take something as simple as the remaining range. For e-drivers, it is extremely important that this number is more or less correct, because it determines whether to stop on the way to recharge or whether the home pole can be narrowly reached. The rangefinder of the U5 does not adjust to driving style. It makes a calculation of the remaining range based on the theoretical total, but if the vehicle is driven faster, the iron count will stick to its first value.

It is that Blik had paid a bit more attention with mental arithmetic and we saw that we would not make it to the fast charger and we stopped earlier, otherwise we would be stranded. ‘Actual or average use is indeed not included in the calculation of the remaining kilometers,’ says the importer. Whereupon Blik blinked for a moment.

Also annoying: in sub-zero temperatures and on the highway (at 100 kilometers per hour) we barely got further than 200 kilometers. It is well known that e-cars do not travel as far when it is cold. But what remains of the promised 410 kilometers is appalling. A software update has meanwhile led to improvement, the importer promises.

The driver’s assistant, which keeps the car within the lines and automatically adjusts the speed, is also irritating. Firstly, there is a cacophony of beeps: every time the system switches itself on and off, a (soft) bell rings. This often happens. Maddeningly often.

Unsafe: when the assistance system is activated, the car casually crawls over the double lines in the middle of the road. There is also a software update, reports the importer. It is fortunate that the car can provide itself with new software thanks to an online connection.

Another: the car sometimes brakes sharply before cornering. For example, the speed on the highway went to 70 in a curve where the recommended speed was 90, to the annoyance of the drivers behind. You guessed it, an update is coming.

Other drawbacks: no three-phase charger, which means that filling the large battery at a public charging station takes an eternity. Coming later this year. A good thing is the fast charger, which in practice achieves 75 kilowatts.

Where the U5 really shows the competition the rear lights is at the maintenance frequency: a service once every hundred thousand kilometers. Bye, fossil brothers.

The U5 suffers from a flaw that computer users have known for decades: the hardware is fine, but the software rattles and is gradually being improved. E-cars from other brands are also affected by this, see the problems VW faced with its new models. Apparently, users will have to get used to their car slowly getting better. Or in the case of the U5: less mediocre.

If you want a lot for little and don’t value gadgetry, look back at this U5. Look tip: take a look at the new Skoda Enyaq.


A novelty of the dubious kind: on board the U5 is a camera that constantly monitors the driver. When he yawns, looks outside, or lights a cigarette, suddenly the voice of God (or the Party leader) sounds, warning you to keep your eyes on the road, rest, or say that smoking is bad. Hello, Blik already has a mother. Fortunately, the system can be shut down. We would tape the camera just in case.