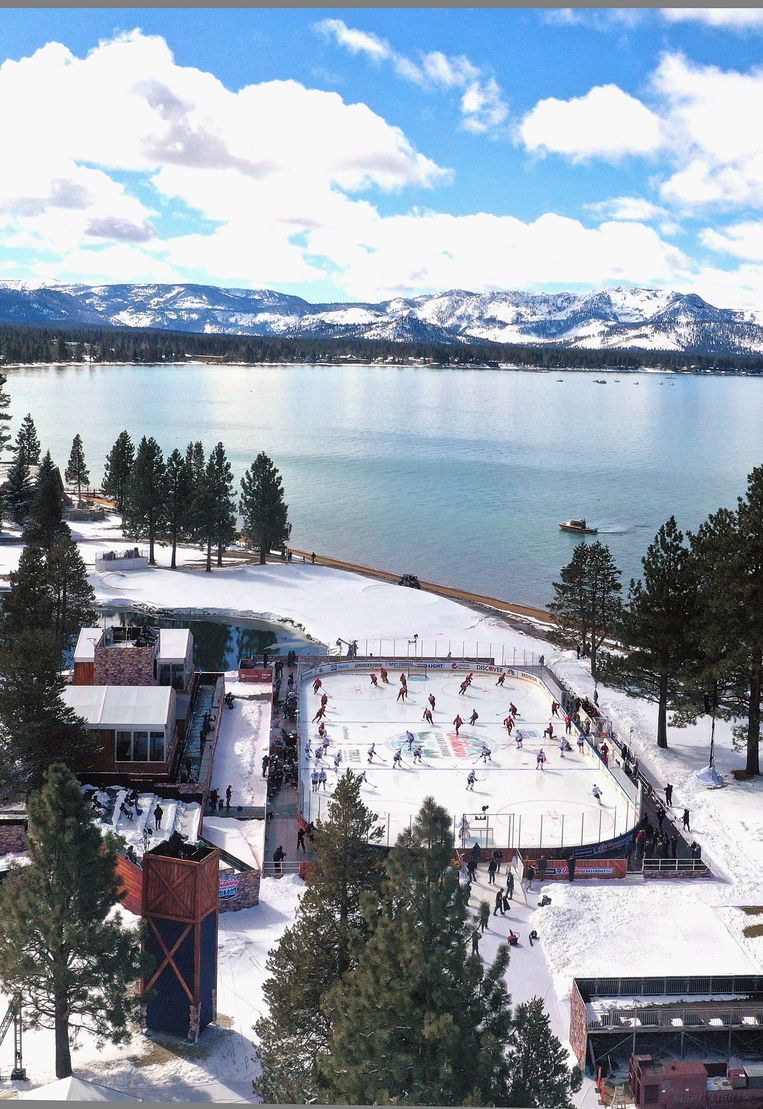 In a picture-postcard setting, the North American ice hockey league NHL organized two outdoor games this weekend. On an improvised coastal ice rink on the shores of Lake Tahoe, athletes starred in a nature film starring the snowy peaks of the Sierra Nevada.

The performance without an audience had a plot twist on Saturday when the first match had to be postponed after a period because the artificial ice started to melt.

The sun burned brighter than expected, the NHL ice masters tried to limit the damage with all their might. To no avail, as after extensive consultation it was decided to move the remainder of the game between Colorado Avalanche and Vegas Golden Knights to the evening. The condition of the ice would endanger the players.

When the puck was brought back into play, it was 9:00 PM locally and midnight on the East Coast of the United States. Sunday’s game between Philadelphia Flyers and Boston Bruins was also moved into the evening. The picturesque scene was thus concealed by the darkness.

It was a major setback for the NHL, which relocates its product to the open air at least once a year. Since 2008, the league has organized the so-called Winter Classic on New Year’s Day, which usually includes American football or baseball stadiums. Due to corona, the previous season (closed in a bubble) ended later than usual and the current one didn’t start until mid-January. The event at Lake Tahoe served as compensation for the lack of a Winter Classic.

The skating rink without stands was built on the eighteenth hole of a golf course, on the edge of the lake, not on it. For Pierre-Edouard Bellemare of Colorado Avalanche, it was an unpleasant surprise. “I’ve never skated on a lake,” he announced with twinkling eyes at a press conference on Friday, after which a teammate helped him out of his dream. ‘What?! I thought it was on Lake Tahoe. ”

(Due to its immense surface of over 30,000 hectares, the lake never freezes over. At the weekend, a few interested people watched from boats at a distance.)

Broadcasting agent NBC had pulled out all the stops to exploit the potential of the environment. A production crew traveled with 35 cameras, a plane for panoramic shots and two drones, one of which could reach speeds of almost 100 kilometers per hour. The broadcast had barely started on Saturday when the thing was already racing above the water surface. The matches were screened without artificial sound, allowing television viewers to hear every cutting skating motion and puck treatment.

The forays into the outdoors usually earn the NHL the highest ratings of the season. The league can use it as the popularity of ice hockey, especially high in Canada, has declined in the United States in recent years.

The corona crisis hit extra hard at the NHL, which derives most of its income from stadium visits. “Every city in America has about 20,000 ice hockey fans,” joked Max Kellerman, an analyst for sports channel ESPN. “And they’re all in the stadium.”

Unlike the NBA basketball league and the NFL American football league, the NHL cannot live on fat TV contracts. According to league boss Gary Bettman, corona damage is more than a billion dollars.

The good news: ratings peaked significantly in the early weeks of the current season, probably because most clubs don’t currently allow spectators.

In the open air, ice hockey returned to its origins, was heard several times last weekend. The sport was first played on lakes and rivers.

Nostalgia for today’s players in Lake Tahoe talked about their first steps on the ice. “They are the favorite memories of my childhood,” said Canadian Jonathan Marchessault (Vegas Golden Knights). “You left with a packed lunch and didn’t come home until nine hours later.”

Beaming, the players entered the unique ice rink at Lake Tahoe on Saturday, even if it was only for twenty minutes at first.

The venue was chosen using Google Earth, then NHL representatives were sold after a single visit in December. If successful, the company with an emphasis on the environment may be continued. The National Mall in Washington DC and Central Park in New York City are mentioned as dream destinations.