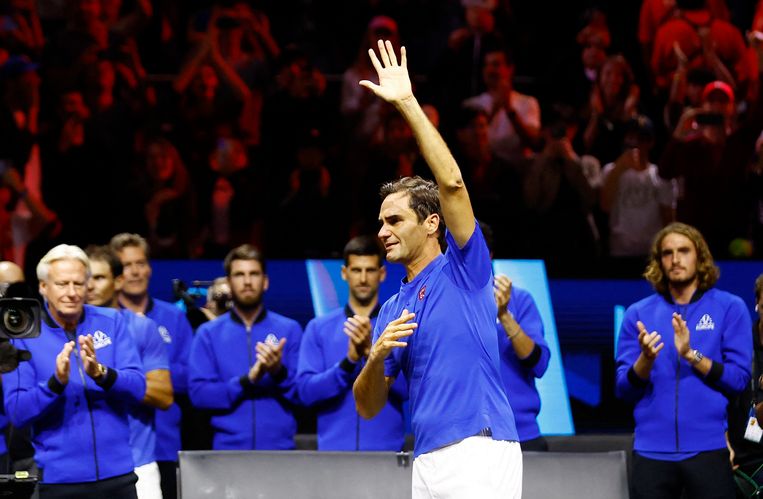 Although it was an emotional evening for the 41-year-old Swiss, he especially enjoyed it, Federer said afterwards. ‘I thought it was a beautiful day. I also just told the boys that I am happy and not sad. It feels great to be here. I enjoyed playing again. This was exactly what I had hoped for beforehand,” said the twenty-time grand slam winner, who was overcome with emotions during the interview on the track.

He thanked his wife Mirka (“she gave me permission to continue playing tennis, she is great”), his parents (“we always blame my mother for everything, because without her I would not have been here”) and the audience at The O2 in London.

The 41-year-old Swiss played his first match in more than a year at the Laver Cup. Due to persistent knee complaints, the twenty-time grand slam winner has now stopped playing tennis. ‘It was a great trip. I never expected to experience such a career. I used to be just happy that I could play tennis. And now it ends here. I’d do it all over again, it was a perfect trip,” Federer said between tears. His long-time rival and friend Nadal did not keep it dry either. British singer Ellie Goulding sang her hit at the end Still Falling For You.

Federer announced last week that he would end his long and prosperous tennis career at The O2 in London. Last year after Wimbledon, he underwent another knee surgery and the recovery of the former number 1 in the world took longer than expected. He recently concluded that a return to the ATP Tour is no longer feasible. He wanted to come into action one more time, at the Laver Cup. The Swiss, together with Nadal, Novak Djokovic and Andy Murray, among others, forms the European team, which will compete against Team World in London. After the first day, the score is 2-2.

A match in singles turned out to be impossible for Federer, who hasn’t played much in recent years due to physical problems. He liked doubles together with 36-year-old Nadal. The Swiss and the Spaniard have been each other’s biggest rivals on the track for years, but have also become good friends.

A few hours before their match against Sock and Tiafoe, Federer and Nadal gave an insight into their preparation via a live stream on Instagram. The video started in the van on the way to The O2. It can be seen that the two tennis icons, who have won 42 grand slam titles together, are having the greatest fun. The Swiss confessed that he was quite nervous for the match that meant his return and farewell. “I’ve done this thousands of times, but this match feels different,” said the man who led the world rankings for a total of 310 weeks and conquered 103 ATP titles.

Federer entered the hard court to ovational applause. The forty-year-old then showed that, despite his long absence, he can still play tennis. Federer left most of the running to Nadal, but did treat the crowd to some nice passes, strong services and alert actions at the net.

In the match tiebreak he was allowed to serve himself for the win at 9-8, but the stiff Americans Sock and Tiafoe once again fought back and took the win.