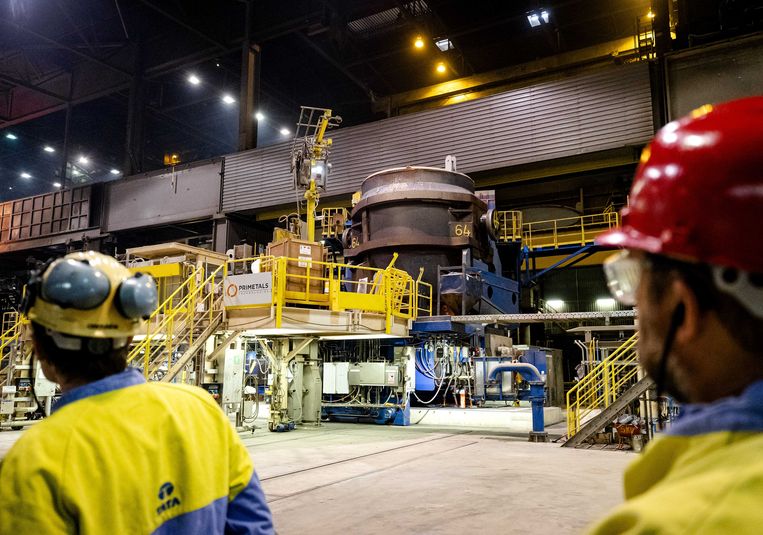 Today Arthur van Dijk, the King’s Commissioner in North Holland, even opens a new installation with the necessary flag display that makes it possible to make high-strength steel in IJmuiden. At 220 million euros, it is the largest investment in the past twenty years.

The new installation – the continuous casting machine 2-3 – will not significantly reduce the company’s emissions. But Hans van den Berg, chairman of the board of Tata Steel Netherlands, thinks it will help customers make more sustainable steel. For example, cars with high-strength steel can be made lighter, making them more economical. It also produces high-quality steel for solar collector constructions on meadows and the construction of wind turbines.

The construction itself was a feat. The installation is built from a sheet pile protected pit 14 meters deep and 35 meters wide in a fully producing factory. Although the factory has had two machines that pour liquid steel into ingots since the 1980s, the new installation is a huge step forward. In this casting machine, the liquid steel is much more stable, which makes it easier to machine. This may also increase the company’s production by several hundred thousand tons.

The investment is part of the so-called Star (Strategic Asset Roadmap) investment program of half a billion euros. In addition, there is the RoadmapPlus program that should reduce the nuisance of dust, odor and noise for the environment. This involves another 300 million euros.

At the beginning of last month, the RIVM (National Institute for Public Health and the Environment) published the results of a study that showed that the standards are being exceeded, especially with regard to the emission of metals and PAHs (polycyclic aromatic hydrocarbons). Paks and lead can be carcinogenic and harm the health of children. That investigation hit like a bomb. The province of North Holland said it was concerned and demanded further greening of the steel factory.

Tata’s most ambitious project is the plan to replace coal with green hydrogen in steel production. This means that CO2 emissions can be drastically reduced and steel can be produced more sustainably. That multi-billion dollar project should be completed by 2030; some critics say five years too late. With an annual emission of 12.5 million megatons, Tata Steel IJmuiden is the largest CO2 emitter in the Netherlands. For this energy transition, Tata wants financial support from the government. There is currently insufficient green hydrogen available to realize the plan.

Incidentally, closing the steel factory is not a realistic scenario at the moment. The municipalities in the area, the province, the national government and even the environmental movement are not in favor of this. The economic interests of steel production and Tata’s contribution to employment in the region are too great for that. Nine thousand people work at Tata in IJmuiden. Significantly, the King’s Commissioner himself is opening the new installation today.

Closure is suggested as an option if Tata fails to realize its greening ambitions. Much depends on the Indian owner who has to make the money available for this. Tata is engaged in a competitive battle with other steel producers such as the German Thyssen, the Austrian Voest and the Swedish SSAB.