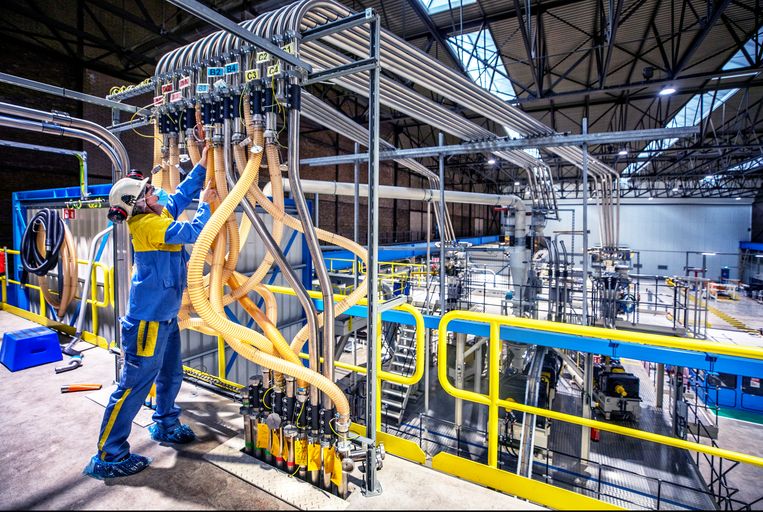 It’s a lot like a covert operation. Now that Hoogovens in IJmuiden – officially until April 1, Tata Steel Netherlands – awaits a beauty contest, it wants to show that it has also become a plastic producer. Hopefully it can charm the Swedish SSAB, which wants to take over the company from the Indian Tata Steel.

The plastics factory is housed under the largest factory roof in the Netherlands – fully loaded with solar panels – which previously served as storage space for tinplate steel. Here, polymers, so-called PET granulates, which are known from the well-known soft drink bottles, are mixed into a film. This is spread in a thickness of less than 0.02 millimeters over the tinplate steel that Hoogovens supplies to the packaging industry worldwide. Ten percent of the 1 million tons of tinplate steel that Hoogovens sells already has a protective layer. The advantage is that other anti-rust treatments are obsolete, saving energy and water. In addition, food safety is improved because it does not contain bpa (bisphenol A) that can harm the human hormone system.

This steel with a plastic film layer that is made in IJmuiden has been given the brand name Protact. And that is how the new production line in the factory for packaging steel has also been called. Simone Vooijs (47), director of the packaging steel division in IJmuiden and the Tata branch offices in Duffel, Belgium and Trostre, UK, is proud of this. Only a few Japanese steel producers do it in a similar way. We are the only one in Europe, ”she says. It took two years to get the process under control. But the teething problems are gone. And the demand is growing enormously. Vooijs herself studied materials science in Delft and has worked in IJmuiden throughout her career, where she now manages 1,700 people. She is now one of the top female managers. And the Protact factory is remarkably popular with women. “Half of the polymer technologists and part of the shift workforce are women.”

While steel mills are in deep trouble due to corona and are lending their hand to the authorities, packaging steel lines are filled with orders. Vooijs: ‘At the moment there is more demand than we can handle. Scaling up is not possible in a short time. In addition, you must also train skilled personnel. At the moment the Protact line is running with four shifts, while we would like to go to a fifth. ‘

Protact replaces five treatments in one go – two paint treatments, two oven treatments and a cleaning treatment – making it a huge efficiency boost. It is striking how the company cherishes this factory. While in other factory halls the dust and smell of the heavy industry are clearly noticeable and scraps of shredded steel scraps are scattered here and there, in the Protact factory people can eat from the floor. The room is kept dust-free and even bacteria-free as much as possible. ‘Yes, you have to. The steel is intended for packaging, for example, baby food. There is no risk whatsoever with that, ‘says Vooijs.

Tin-plated tin has been produced in IJmuiden since the early 1950s and is supplied as packaging steel to the manufacturers of drinking cans, paint cans, aerosol cans, food cans and battery cases. It is one of the legs on which the group rests. And some directors sometimes said that Hoogovens would no longer have existed without tinplate. There were sometimes engineers within the company who turned their noses at it and preferred to deal with the sexy automotive branch that makes steel for the car and motorcycle industry. There, researchers, hunted by competition, had to constantly come up with the latest gadgets to improve the steel.

A large part of the large Tata research laboratory in IJmuiden, located a little further away, has now been set up for research into the improvement of packaging steel. Because tin has a future. Especially in the time of corona demand has increased because people buy prepackaged food. The lab also houses the glass jars in which, for example, Hak packs green beans, carrots and applesauce. ‘We only use that to make the material for the rotary lids. But glass is actually only used as packaging for vegetables in the Netherlands and Norway. The rest of the world uses tin. In a country like Japan, coffee is also sold exclusively in tins. ‘ The main advantage of tinplate is that it can be separated so easily at the waste companies. In Europe 82.5 percent of the tin is recycled, in the Netherlands that is even 96 percent. The advantage of the plastic film is that it does not have to be removed during recycling.

There are three large silos with PET granulate for the production of the plastic film. These are heated, poured, dried, stretched, checked and rolled up in self-developed installations. The customer can choose a white, black, gold-colored or transparent film. Next, the ready-to-use film is applied on a laminating machine to the 0.33 millimeter thick rolled steel. Due to the minimal plastic layer, the content, for example the apple sauce, does not stick to the packaging. The first major customer was an American manufacturer of aerosol cans for whipped cream, cheese and ice cream toppings.

In IJmuiden, people have not yet finished improving tinplate steel. The craziest experiments are conducted in the laboratory to investigate whether the quality of tinplate steel can be further improved. There, Hoogovens makes its own cans in which salt water is packed for weeks. ‘Not that it is intended for that, but the results are useful for improving the packaging of canned fish.’ Whether cans are exposed to temperatures of more than 100 degrees Celsius. Cans are also tested for strength, just like automotive steel.

The film is also produced in IJmuiden, which is used in Tata Steel’s packaging steel factory in Trostre, UK. Whether this will remain the case after the separation of the Dutch and British company remains to be seen. It will be a tough fight because steel packaging is an integrated business unit.