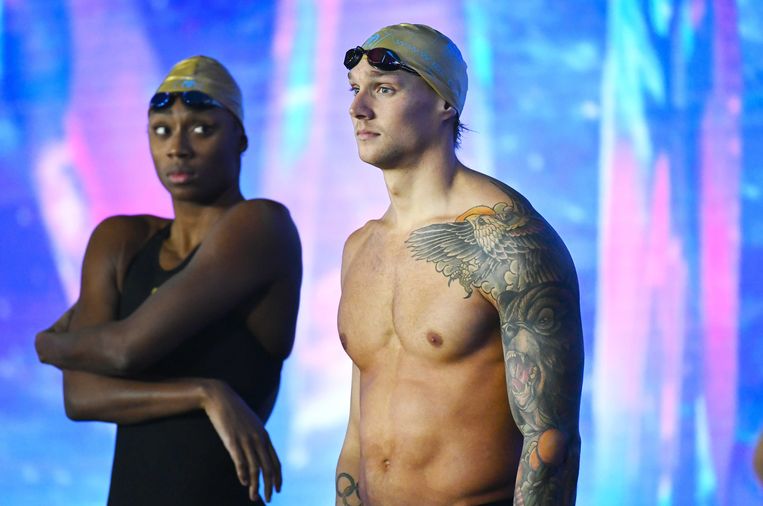 Caeleb Dressel jumps higher than most basketball talents in America. Even before he gets on the starting block, he shows where his great talent lies. From a stationary position, the 25-year-old American jumps up vigorously with bare feet on the wet pool floor. He rises above 5 feet, a breathtaking jump for an athlete who won seven Olympic gold medals in the pool.

Strangely enough, Dressel doesn’t win his matches in the water, but outside it. The sprinter, who is often compared to swimming legend Michael Phelps, has a unique start. His competitors have no chance before the first trick is made. Also in the Pieter van den Hoogenband Zwemstadion in Eindhoven, where Dressel is showing his refined starting technique at the finals of the International Swimming League commercial swimming competition this weekend, he is always half a body length ahead after the power explosion of the block and the effective kicks underwater. .

Dressel owes his good start to his broad education in his youth, he says after his team Cali Condors lost the final to team Energy Standard. ‘I never trained very specifically on jumping before swimming, but I did all kinds of sports in my youth that I now benefit from. I played basketball a lot, but I was especially good at volleyball. That’s where I got that jumping power from.’

Former swimming coach Jacco Verhaeren looks with admiration at Dressel’s performance. ‘When he jumps into the air like that before the start, you don’t really know what you’re seeing. Then he does the same on the block. Nobody beats him after the start.’ Verhaeren compares the swimmer’s qualities with those of basketball players and top sprinters in athletics. “He has a special kind of strength, I call that power. You shouldn’t be able to move a lot of weight, but you should be able to move a certain weight very quickly. He can do that at the start and that is quite unique in swimming.’

Dressel became Olympic champion in Tokyo in the 50 and 100 freestyle, and the 100 meter butterfly, plus in the relays in the 4×100 free and 4×100 medley. It has one of the fastest reaction times in the world. When the starting gun sounds, his toes leave the starting block well within the time of 0.65 seconds it takes to compete with the world’s best, the starting block. The American regularly shows reaction times of 0.59 and 0.61. And while some competitors lean back as they curl their fingers around the block before making the dive, Dressel keeps his body tilted towards the water as much as possible. Logical, he says. ‘If you stand more back, you have to bridge extra distance, don’t you? That just takes time, so you shouldn’t want that.’

During the jump, Dressel takes his arms sideways in the air to generate extra speed. When his fingertips touch the water, he slides diagonally downwards like a dipper with almost no splashes.

After that, his second quality comes in handy with the butterfly kicks. In his youth, young Dressel spent hours studying videos of Michael Phelps’ effective underwater butterfly leg stroke. Underwater swimming is the fastest, so the best swimmers wriggle as long as possible like a fish to the fifteen meter point, where they are required by the rules to surface. “Phelps did something a little different with the kicks,” Dressel says. “He could keep his upper body completely still. I move a little more from my chest to my toes, but with my body proportions, this works best for me.’

Phelps was the freak of nature with his hypermobile joints and long arms, with a wingspan eight centimeters longer than his body size. Dressel is three centimeters shorter than Phelps at six feet. ‘Dressel also has relatively short legs and a longer upper body, which is especially useful for the butterfly stroke, where he can maintain the ideal rhythm with arms and legs,’ says Verhaeren. “Phelps was the best in swimming technique, but Dressel is the real king underwater.”

At his world title in the 100 meters free in 2019, Dressel completed the first fifteen meters in 5.1 seconds. The Australian top sprinter Kyle Chalmers, who finished second, needed 5.5 seconds. The two were also at the Games in Tokyo on the king number 1 and 2.

Strikingly, Dressel herself calls Chalmers the best swimmer in the world. “If you want to know how to swim the 100 free, watch Kyle,” Dressel says in one of his videos on his own YouTube channel. The Florida sprinter posts extensive analyzes of his own competitions online. ‘I’m a real nerd when it comes to technical things in swimming’, says Dressel in Eindhoven. ‘That’s what makes it so much fun for me after all these years. There is always something that could be improved.’

Behind the computer, he looks nothing like the glutton from the bath, who has tattooed his left arm and part of his shoulder with an eagle, bear and alligator. On his right leg are the outlines of a next project. From his groin to his ankle, a wild western theme is drawn with cacti, a cowboy’s skeleton and flowers. It just needs to be colored.

With old-fashioned round glasses on his nose, Dressel tells us on YouTube what is wrong with his matches. About his race in Tokyo in which he takes the Olympic title on the king’s number: ‘Look, I’m breathing again before the turning point. My head hangs to the side way too long.’ About his world title at the World Cup in 2019 in which he takes over the world record in the 100 butterfly from Phelps: ‘So stupid, I lift my chin too far after the start. Why am I doing that, the water isn’t going anywhere, is it?’

Now that Dressel has finished in Eindhoven, he goes home to rest. He is tired. Then he dives into the water with a new trainer, Suriname’s first Olympic champion Anthony Nesty. What does he hope to learn from him? Dressel: ‘A lot. That’s the beauty of swimming. It’s never perfect. Things can always be better.’

Femke Heemskerk waves off with victory


Femke Heemskerk put an end to her impressive swimming career on Saturday at the International Swimming League commercial swimming competition, where she took the overall victory with her team Energy Standard. In Eindhoven she dived into the water one more time. Again in the relay, the swimming number where she so often outdid herself as a team. And now? ‘Relax’, says Heemskerk, who wants to reflect on her future in the coming months. She sees opportunities for a role as a coach. Heemskerk was especially successful in the relay, where she swam many titles together with the Dutch swimming team. The sprint quartet, which won the Olympic title in Beijing in 2008 in the 4×100 free, was unbeatable for years. Heemskerk had a career with ups and downs in which she long searched for individual success. She succeeded at the World Championship short course in 2014, where she won the world title in the 100 free, and this year when she became European champion in the same distance.