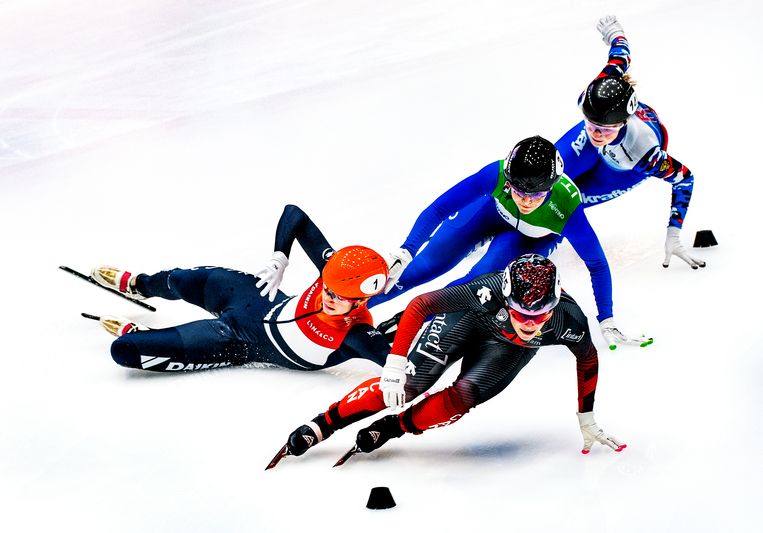 Suzanne Schulting’s scream sounds shrill through the short track hall in Dordrecht. Like the final driver, she won the relay race. The gold is more than welcome after a day when she was battling with herself. A day when one voice kept nagging about how she was being “shit” and another voice kept encouraging her.

The victory with the women’s relay team was a positive end to the World Cup weekend, in which she also won the mixed relay team, but in which it became especially clear that she is not unbeatable on the individual numbers. She won bronze in the 1,000 and 1,500 meters. In the 500 meters she hit the ice with her shoe during an overtaking maneuver, slid down and finished fourth.

A week earlier, at the World Cup in Hungarian Debrecen, Schulting (24) still seemed unbeatable. She won four golds. The question arose as to who could stop her in this Olympic season.

There are plenty of them, it turned out. Especially because Schulting felt the fatigue in her body in recent days, after an exhausting World Cup campaign. In Dordrecht she drove twenty races, all preliminary rounds included. In Debrecen she came to 17. She always competed for the victory.

In fact, she didn’t want to admit she was tired, afraid it would be seen as an excuse. “It’s not in my nature to blame that. I don’t want to say I’m up.’ She likes to win always and everywhere. ‘I also find it terrible if I lose when I lose a game of goose-plate or people-worse-not-you-not-be.’ Sometimes she is annoyed by that character trait. ‘Then I think: what a terrible woman you are. I put so much pressure on myself.’

Still, she couldn’t help but accept missing out on individual gold. Losing is part of this chaotic sport. A mistake is easily made, opponents slip past on the cramped track of 111 meters in the blink of an eye. “I’m not dissatisfied at all.”

According to Arianna Fontana (31), who has the most Olympic short track medals in her trophy cabinet with eight slices, Schulting is not unbeatable in any case. The last one who, in the opinion of the Italian, deserved that stamp is the Chinese Wang, who dominated short track speed skating a decade ago and became four times Olympic champion. She was the great example of Fontana. In the 500 meters she took a half lap lead. That’s unbeatable.’

Schulting’s performances are of a more modest size, says Fontana, who came second in the 500 meters. “She’s human.” She has her ups and downs just like everyone else. And if things go a little less, there are plenty who overshoot Schulting. That’s how wide the top is for women this winter.

That is a difference with last year, when the Dutchman won all parts at the World Cup in Dordrecht. The mutual relationships were disrupted at that tournament due to the variety of national corona measures. Many opponents of the Dutch then struggled with a lack of training and competition rhythm. Fontana: ‘I had only been on the ice for two months before that World Cup.’

Kim Boutin (26) was missing at that World Cup. Now she was there and the Canadian won the 500 meters. Four years ago, Boutin won three medals at the Games, silver in the 1,000 meters behind Schulting and bronze in the 500 and 1,500 meters. She also sees plenty of opportunities for Beijing to beat the Dutch. “Everyone who makes it to the final has a chance. If I drive well I can beat anyone.”

Schulting does not draw too strong conclusions based on the last World Cup weekend of this winter. “It can’t always be gold. If you take gold at the moments where it matters, at the World Cup, European Championship and Games.’

The most important lesson from the competition in Dordrecht was that she should not let herself be stirred up too much. That happened on Saturday’s 1,500 meters and on Sunday’s 1,000 meters, the distance at which she will defend her Olympic title. “I was too restless.”

She will have to find the mental peace herself, the physical rest should not be a problem in Beijing. The short track races there are spread over a good two weeks and she will drive a maximum of four races a day, with a day of rest in between. ‘Then I will be much more rested at the start.’

The competition has been warned.