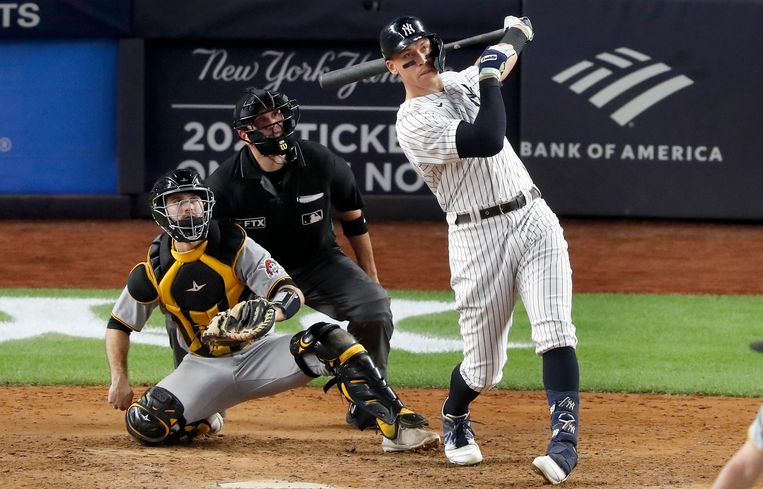 With a bit of luck you will go home with a memento as a visitor to an American baseball game. If you catch a ball in the stands, you can keep it. But one ball is not like the other: Last week, the 60th home run of the season by Aaron Judge, the powerful star player of the New York Yankees, landed in the crowd.

Judge was thus on a par with the legendary Babe Ruth, who reached 60 as a Yankee in 1927. Judge is chasing the record of Roger Maris, who hit 61 home runs on behalf of the New Yorkers. The sixty mark is mythical in American baseball. In the late 1990s and early 2000s, batters Mark McGwire (70), Sammy Sosa (66) and Barry Bonds (73) flew by, but their doping use cast a different light on their achievements.

That the six-foot-tall Judge was able to make history on Tuesday was reflected in the sky-high ticket prices for Yankee Stadium. The spots behind the outfield were particularly popular, as the ball could land there after Judge’s 60th. In the ninth inning against the Pittsburgh Pirates, the time had come.

Beneath a pile of grown men, 20-year-old Michael Kessler held on tightly to his trophy. Judge’s record ball had bounced to the top of his box at the student’s feet. Kessler didn’t think twice and ducked on top of it. Others did the same, but he was the fastest.

Almost immediately, Kessler was approached by Yankees staff. Did he want to return the ball? Kessler could have declined, as the home run number 59 owner had done in a previous game. But he decided to pass the ball to Judge. In return, he got a signed ball, a bat and a meeting with the star player.

Every year, thousands of balls in American baseball fly into the stands, on home runs or foul balls. The possibility of a catch is a reason for stadium visit. Some spectators bring a glove in case a projectile comes their way. A flyout often leads to cheers and applause. Triumphantly, the lucky ones keep the ball in the air, if possible with their beer in the other hand, still intact.

The fact that the balls are allowed to be kept attracts the necessary collectors. The biggest is Zach Hample, a baseball enthusiast who has taken home thousands of balls since 1990. Some he collected during warm-ups, by coming to the stadium early, others by simply asking for them. Players in the outfield regularly throw a ball into the crowd. Ball boys and girls do the same.

Some of his crop comes from fly balls. “Make sure you have a lot of space around you so that you can move,” Hample shared his expertise in the newspaper USA Today. Another tip from the American: don’t sit in the front row, but don’t sit too far back either. “Most balls end up in the middle of the box.”

In San Francisco, during the Giants’ home games, a man has long been sailing in a canoe around McCovey Cove, the water right next to the stadium. The club’s 66-year-old Dave Edlund has grabbed dozens of home run balls from the water over the years. It earned him the nickname McCovey Cove Dave on. He now has competition from other canoeists and from some supporters who throw their fishnets into the water from a low-lying stand.

Sometimes supporters are too eager to catch a ball. In 2003, Steve Bartman faced death threats. The Chicago Cubs supporter snatched a ball from the glove of Cubs player Moises Alou in the semifinals of the playoffs. What should have been a flyout by Alou, now became the impetus for a comeback by opponent Miami Marlins.

Bartman had to leave the Chicago stadium under security. At home, six police cars guarded his home. For years, Bartman was bullied and threatened on the Internet, until the Cubs won the title in 2016 for the first time in 108 years. Bartman received a championship ring from the club as a saving grace.

Bartman’s offending ball was later bought for well over a hundred thousand dollars by a Chicago restaurant owner, who displayed the thing for a while but finally detonated it publicly. It should fix the Cubs’ bad luck.

The ball that Judge hit into the stands last Tuesday could fetch several hundred thousand, according to several auction experts. According to some baseball fans on social media, Kessler, the student who got possession of the ball, missed a unique opportunity by returning the thing. The Yankees supporter himself had not hesitated. “He deserved that ball,” Kessler said. ‘I have no regrets.’