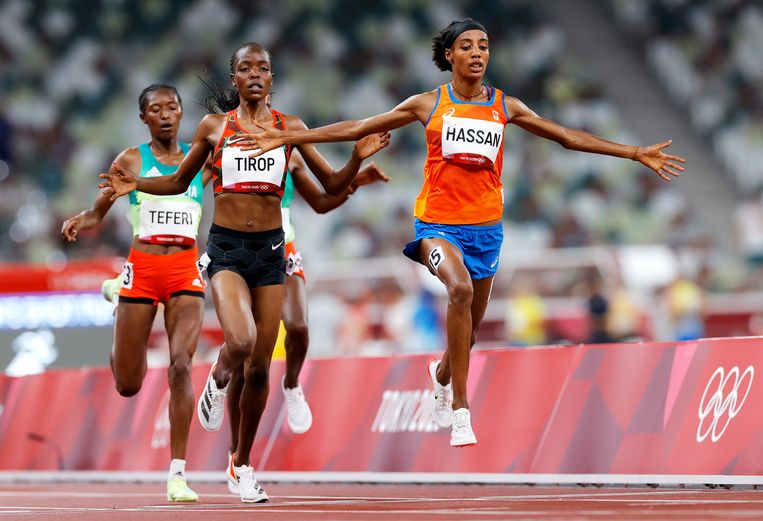 Sifan Hassan already set a world record: ‘superspikes’. Race officials couldn’t find anything wrong with the shoes she was wearing, but now they’re appearing on short distances as well. According to some the ‘dummy shoes’ are a form of cheating, according to others it is just progress.

Usain Bolt isn’t quite sure. In August 2009, the sprinting legend in Berlin, who retired four years ago, raged to 9.58 seconds in the 100 meters and 19.19 seconds in the 200 meters. But on the eve of the king’s number of the Olympic Games – the women run the 100 meters in Tokyo on Saturday, the men on Sunday – his world records may be at stake.

The reason for his unrest: blood-fast spikes, especially for short distances. Tricky shoes in his experience, miracle slippers for the stretchy in athletics. Bolt chose bold language from Kingston, Jamaica, in an interview with Reuters: ‘It’s laughable that they are allowed. I can’t believe we’re here.’

They are already commonplace at the marathon, the colorful steppers with a carbon plate and a springy foam layer. In the long and medium distances on the track, the advance is almost complete. At the beginning of last month, Sifan Hassan ran a world record in the 10,000 meters in Hengelo. The jury of the FBK Games confiscated them for inspection, but could not find any irregularities.

Integration has now started at the sprint, despite earlier speculation in the British press that the manufacturers had concluded a gentlemen’s agreement to refrain from innovations in this area. In doing so, they would have wanted to prevent Bolt’s historical times from disappearing from the books in an unnatural way.

The awe for those achievements turns out to be relative: Nike supplies the spikes. New Balance and Puma have them too. Adidas and Asics are not that far yet; they would aim for introduction for the Games in Paris.

The difference with the versions for the longer tracks: stiffer upper and a thicker plate under the ball of the foot. As in the longer distance version, carbon and foam return the athlete more energy, a bounce after the foot is planted. The legs feel less tired. Few still doubt the effect. Bolt to Reuters: “With superspikes I would have come under 9.5.”

Is a threat to the world records real, if not in Tokyo, then later? The best time of the year is in the name of American Trayvon Bromell, one of the favorites this weekend in Tokyo. In June, he ran 9.77 in the United States, on New Balance. There aren’t that many athletes who are able to break the 9.8 barrier. Yes, Canadian Ben Johnson succeeded, running 9.79 at the 1988 Games, but was kicked out of the tournament for using anabolic steroids. More recent is Christian Coleman’s 9.79, in Brussels, 2018. He is missing from Tokyo after missing doping controls.

Bromell has been around for a while, in 2015 there was bronze at the World Cup. He is not convinced of the effect of the shoes. ‘We are constantly working together on the perfect spike, but personally I don’t think there is enough data to indicate a major improvement.’

Also remarkable is the performance of Shelly-Anne Fraser-Pryce. The 34-year-old Jamaican, chasing a third Olympic gold medal in the 100m, ran to 10.63 in June, the best time in 33 years and significantly improving her personal best of 10.70 from 2012. Only Florence Griffith Joyner was faster in 1988. Fraser-Pryce has Nike Air Zoom Maxfly on the feet.

Fraser-Pryce refuses to attribute her progression entirely to the footwear. According to her, it is the combination of a good runner with good material. “You can give my spikes to someone else and they won’t do the same things I did. I don’t discount the hard work of me and my coach.’

The fact that one brand delivers ‘superspikes’ and another does not, has meanwhile led to the so abhorred uneven playing field. Bolt was clear about it. “This is unfair.”

Every brand at its own pace

Most athletes in the Dutch sprinters group of national coach Bart Bennema run on Adidas, including Dafne Schippers, who ended her collaboration with Nike in February after almost ten years. Hensley Paulina and Churandy Martina do have Nike’s fast spikes. Bennema regrets that not everyone has access to equivalent material. “But we are in this phase. Each brand sets its own pace. Such things happen.’ Is there frustration with his athletes? ‘That’s not too bad. It’s more: huh, why now?’

That does not alter the fact that Bennema is extremely enthusiastic about the modern technology for sprinters. The contact with the ground seems to be shorter, especially at maximum speed. In recent women’s fast races, he said he saw that the stride length is a bit longer and that they are better able to maintain their cadence on the last stretch. ‘We also think that the impact on the body will be less. It is expected that fewer muscle and tendon complaints will occur. We can already see that with Hensley and Churandy.’

From contact with other sprint coaches, he concludes that in the meantime tightening up in times of 2 percent is considered possible: approximately 0.2 seconds. ‘That’s a lot, yes. That could indeed mean new world records.’ He has no objections. ‘This is progress. It is very interesting to be in the middle of such a revolution.’