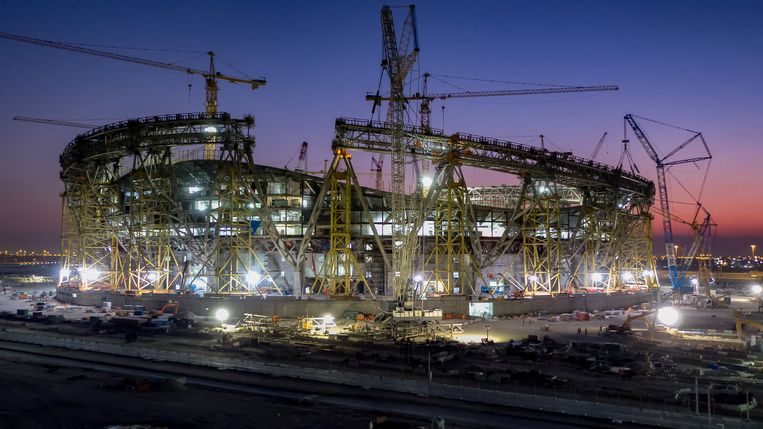 ‘I try to debunk the repetitive fractures in the sport’, says philosopher Sandra Meeuwsen, who recently obtained her PhD at Critique of Sportieve Reason, a philosophical archeology of modern sport. A lesson from her research? ‘The insight that sport has destructive aspects that can heal if you acknowledge them. Sport is not a great factory of happiness. You can learn a lot from the drawbacks. ‘

Meeuwsen mentions the problems of the gymnastics federation, with his revelations about abuses in the supervision of underage girls. ‘Everything that comes up in gymnastics has to do with repression. It is more extreme than in other sports. It is deep in the DNA of gymnastics.

If you go way back, you see that gymnastics and gymnastics evolved from training for military labor. This gives it a martial and disciplinary character from the outset. A drill sport. Then you shouldn’t be surprised that, mixed with ambition to reach the top ten, it leads to abuse. ‘

Especially if you combine those characteristics with heavy training from a young age. ‘If you want to discipline and deny children joy, there comes a moment of setback. That is happening now. The cesspool is wide open. Former technical manager of the gymnastics association Hans Gootjes says even now: we have to move forward.

But if you’re not mourning something that went horribly wrong, the demons will keep coming back. The girls who have experienced misery will continue to ask for recognition. Loss, in whatever form, is something to grow from and thus to change the DNA, to reconstruct it. ‘

Meeuwsen delved into disqualified aspects of sport for her research. She calls that the figurative cesspool. ‘Much has been declared impassable, and then you should not be surprised that excesses are taking place. What should not be there wants to manifest itself. That is one of the reasons why things sometimes go out of control in football. What is not allowed is suppressed.

‘We have many reports on the power and social impact of sport. We keep hitting the same anvil without realizing the downside. Then you know for sure that what may not be in those forces will stir. That is being resisted. ‘

At the beginning of the corona era she too thought: is everything going to change? But no, everyone longs for normal, for tournaments and events. The calendar is more complete than ever. ‘We depend on the magic of sports. Tournaments are in your biological clock. I do not condemn anything, but I hold up a mirror that we are all creating and maintaining this sports circus.

‘Coaches, athletes, sponsors, journalists. Many close their eyes or say, ‘Football is war. I’m glad we fight it out on the field. ‘ It begins to recognize that sport has a dual structure, with a nice side: the gladiolus. But also with a downside: death. Death and gladioli are one, which is why sports are so beautiful.

‘Don’t point out to others that chants come from outside, no, those chants are also a product of the sport. Then it is not enough to run a campaign. You have to recognize that those chants are there for a reason. Maybe they are really supporters, because it takes quite some effort to buy a ticket. Then you look at it differently, for example by deploying your own supporters. The downside of sport cannot be sealed with a campaign, a brochure or a theater tour. You have to go deeper into that culture. ‘

Meeuwsen advises municipalities, unions and policymakers. She teaches. ‘It is increasingly about difficult issues. Integrity. Abuses. Governance. ‘ She has been in contact with Houssin Bezzai, appointed by the KNVB to lead the fight against racism and discrimination. ‘He has a hard time in that place. As a former player and as a person, he is already much more connecting than the DNA in Zeist, which is not connecting. It is primarily a struggle there. Black or white. You belong or you do not belong.

‘When I went to Zeist, I put on a suit to match the culture. It is three-part gray, although it is changing. You see more women and more awareness that football is at the heart of society. It is very comfortable, in the middle of the woods. And then it is useful to say: that misery in sports, that comes from outside, that others do. Acknowledging that it is not the case is the beginning of the road to recovery. This does not only apply to football. No sport is sacred. ‘

She has coached top athletes as a mental coach, who at the age of 25 discovered that they gave up too much. ‘In one go the world opens up and the magic is broken. Then they stop, or they continue, more in balance. The whole theater disappears, while we just want that drama.

‘I followed Ronaldo on social media for a while. That’s one big play, but I don’t know where the real person is. Maybe in Madeira, when the lights go out. He has become a product of what football is today. A spectacle.

‘It is quite difficult to remain authentic, while we want that from athletes. Then we enjoy the most; the turn in the Tour, on the penultimate day. Everything has been calculated, but then a young guest (Pogacar) arrives and eats everyone up. We just hope that it is not prepared, that the fairy tale remains.

‘Corona puts that fairy tale under enormous tension. We are re-asking questions about overgrown commercial revenue models that we may not want to maintain. I do not determine that the hour has struck you, but I expect a clearing, just like in normal business.

‘You may wonder whether professional football is a healthy industry. And that also has to do with salaries. On the other hand, we want the Champions League again. As long as that need persists, there is a legitimacy to keep this circus going. ‘

Meeuwsen argues for smaller-scale sports, with less travel, with a different organization and set-up of large sports federations, from NOCNSF to Fifa. ‘The Games and the World Cup almost toppled Brazil and we did not want to protect Brazil from itself. It has gone completely out of control. Back to the people, that’s my term. We have increasingly related sport to external objectives. City marketing, economic growth. ‘

Take the World Cup in Qatar. Ethical arguments for not having a World Cup there have not helped. ‘Commerce dominates everything. But it is not money that escalated the sport, it is us. We have created something on which we have become so dependent that we allow money to determine everything.

Pierre de Coubertin had the best intentions with the foundation of the Olympic Games. He wanted to provide a counterpart to Victorian morality. Celebrating the body. That was revolutionary. But from the first Olympics, project developers joined. Like: wow, we’ll add an Eiffel Tower and throw a party around the city of Paris.

‘We are still in that mode. We have to peel and uncover. Back to basic. That is the biggest challenge for the coming decades. Just having fun with everyone again. ‘