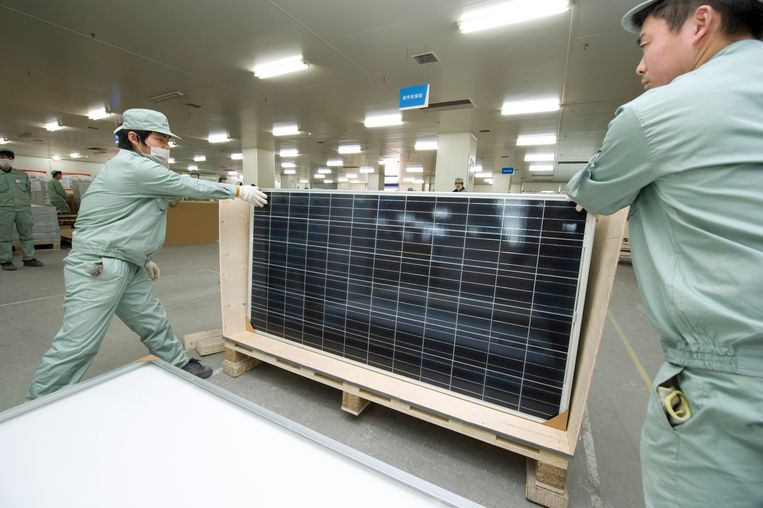 Anyone who wants to buy solar panels can hardly ignore China. The country controls about 80 percent of the world market for solar panels based on crystalline silicon, the dark and bluish panels known to everyone. About 95 percent of all panels are of this type. ‘China controls the entire value chain,’ says Arthur Weeber, part-time professor of solar energy technology at TU Delft and who works at TNO. ‘From mining the raw materials to making the silicon slabs and manufacturing the modules.’

This has not always been the case: until 15 years ago, Europe was the world’s most important supplier of solar power. Germany in particular was a great power. Until the market here was flooded with cheap, subsidized panels and within a few years an entire industry was decimated.

It is now becoming increasingly clear that a lower price is not everything when it comes to sustainable solar power. For example, there are concerns about the working conditions under which Chinese panels are produced, such as suspicions of abuse by minorities in the extraction of raw materials. Although no hard evidence has been found for this. Nevertheless, the US Solar Energy Industries Association last October called on solar panel suppliers to cut ties with the Xinjiang region over these rumors.

The production of Chinese panels is also more damaging to the climate, because the country largely runs on coal-fired power stations, while Europe has a much more climate and environmentally friendly energy production. In addition, Chinese panels have to be transported over a greater distance. ‘This means that the energy payback period is the time it takes to produce the CO2-to eliminate the emissions of solar power production from European panels about a month less, ‘says Weeber. On average, it takes a year to a year and a half for a solar panel to produce its own CO2emissions ‘recouped’, over a lifespan of 25 to 30 years.

2) Geopolitics: Dependence on one country is not good

With today’s knowledge, it may have been unwise that Europe has left the production of solar panels to China, says Coby van der Linde, director of the Clingendael International Energy Program (CIEP). Does China’s power pose a potential threat to the European energy transition? For example, if Beijing decides to stop supplying panels? ‘In general, it is not wise to make yourself dependent on one country,’ says Van der Linde. ‘But it’s a different story with solar panels than with oil or gas, for example.’

Once here, panels will contribute to the domestic energy supply from that moment on, while fossil fuels must continue to be supplied. An interruption of the supply therefore does not immediately lead to problems in the energy supply, according to the energy expert. Nevertheless, she believes it is good if Europe becomes less dependent, ‘although that does not only apply to solar panels’.

3) Innovation: All relevant technological knowledge is in Europe

According to Professor Weeber, it is a piece of cake from a technical point of view to bring production to Europe. ‘Chinese manufacturers use European machines to a large extent. So all relevant technological knowledge is still here. ‘ There are also top players in Europe in the field of research and innovation, according to the professor. ‘There is a lot of technology in the Netherlands that travels all over the world,’ says Weeber. ‘Consider, for example, the double-curved solar panels that the Dutch manufacturer Lightyear uses on its solar cars.’

There is also no obstacle with regard to raw materials. Although almost 70 percent of the silicon now comes from China, as the US geological service USGS states, the world supply is virtually endless. “It is the second element on Earth, after oxygen,” says Weeber.

According to the professor, various manufacturers are eager to restart mass production here. According to him, a production of a few gigawatts can be achieved in a few years. ‘In China they also build solar cell factories, so that should be possible here too.’ It takes about a year and a half to build a factory, says a 2015 report by CIEP on the value chain of solar panels.

About a year ago, the so-called Solar Manufacturing Accelerator (Soma) was established to strengthen the European solar sector. This should help rebuild the industry chain, from raw material to panel, in order to become less dependent on imports. Recently, the European Solar Initiative was added (similar to the European Battery Alliance, which aims to initiate European battery production for the electrification of cars and trucks), which is intended, among other things, to help finance the initiatives.

But if all those advantages are already there, why not start producing panels itself again? Just as in the past two years a lot of money has been invested in the production of batteries for electric cars, a market in which until recently Europe hardly played a significant role?

It is a political choice, experts say: to get the market going in Europe, something must be done about the influx of cheap panels from China. This is possible with new tariff measures, as has happened before. In 2012, for example, the United States erected a tariff wall for Chinese panels to protect its own industry. In the same year, the European Commission started an anti-dumping investigation. But high import tariffs are not uncontroversial, and two years later the World Trade Organization (WTO) declared US trade barriers illegal.

In order to become competitive with Chinese producers, subsidies or so-called eco-labeling could also be an option. The second option is being considered by the EU for solar panels. “Another option is that Europe requires that panels sold here must be partly produced in Europe,” says Van der Linde of Clingendael’s energy program. ‘Then Chinese companies would have to invest more in production capacity here.’

The time is right to rebuild our own industry. Cheap wages are becoming less important because the production process is increasingly automated, energy agency IEA noted a few years ago. In addition, thanks to low interest rates, capital is cheap. “That would argue in favor of starting here now,” says Van der Linde. ‘We just have to organize the raw materials differently.’ Now that a lot of resources are becoming available under the European Green Deal, the time is very good for a rebirth.

6) Production: Europe is good at customization

Arthur Weeber of TU Delft sees opportunities in the near future in particular where custom panels are integrated into roofs. Instead of being placed on top, as is happening now, they are for example built into prefab roofs, whether or not in exactly the same color as the rest of the roof. Here too, the Netherlands is at the forefront of technology, says the professor. ‘If we start applying this kind of new technology, it offers great opportunities for the European solar industry.’

But: why the European ambitions will not get off the ground

It is simply almost impossible to compete with panels from Southeast Asia, because of the sheer numbers that are produced there. European companies can never deliver so cheaply and not in those quantities. But growing doubts about working conditions in China are putting pressure on the social acceptance of these cheap panels. In other words: will you be able to tell your neighbors that you have panels on your roof that may be wrong?

In addition, the pandemic has shown that it is not wise to make yourself dependent on one country or region for a particular product. See the shortage of computer chips, which the automotive industry worldwide is struggling with. To ensure the energy transition, it is good that Europe is not just shopping in this region, or is going to produce more itself.

Whether the situation changes therefore partly depends on politics. But also whether the consumer is willing to spend more on panels that are not only good for the climate, but also for the people who make them and those who have to look at them. Weeber: ‘So much more is possible than what we see now.’