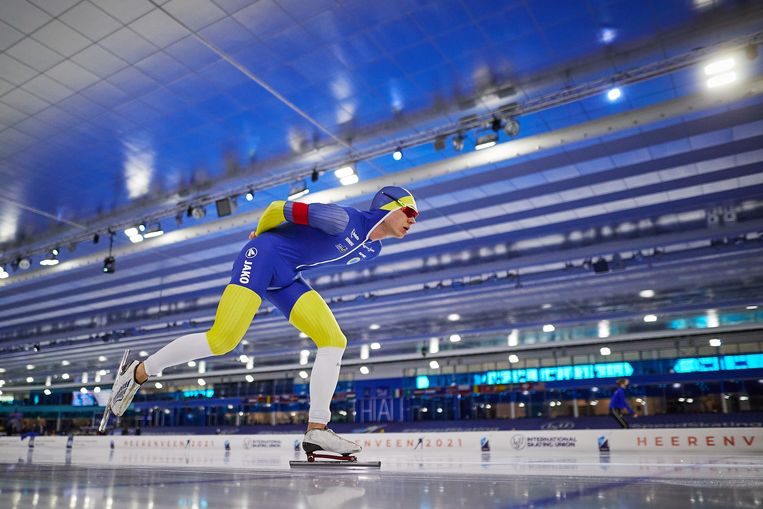 A year ago, Nils van der Poel shook up skating firmly. He became world champion 5 and 10 kilometers. At this winter’s first World Cup race, he picked up where he left off and won the 5K. But there are no guarantees of success in China, according to 25-year-old Swede. “I realize I probably won’t be an Olympic champion.”

It is not a false modesty of Van der Poel. It is a determination based on the past three Winter Games. At his favorite distance, the 10 kilometers, Sven Kramer was expected to win three times. But in Vancouver, Sochi and Pyeongchang it was always someone else who took the gold: Lee Seung-hoo, Jorrit Bergsma and Ted-Jan Bloemen. The stats speak to the top favourite.

The only international 10 kilometers for the Games is at stake in Stavanger on Saturday. It is the distance that matters to Van der Poel. Before that, he returned to speed skating after a two-year break. Now he wants to earn one of the twelve Olympic starting tickets for that distance in Norway.

It can always go wrong. Four years ago, in his previous skating life as a sub-topper, the longest distance was also his main goal, but he was ill when the Olympic tickets were distributed. He therefore only drove the 5 kilometers in Pyeongchang. He got stuck in 14th place.

That disappointment has changed him, Van der Poel said in mid-October after a rainy training ride in Inzell on a mountain bike. He has since accepted that he cannot influence everything. He can get sick again, someone else can have a great day. Nothing is certain in top sport and failure is part of it. “You do your best and then it’s up to fate.”

The Swede presents himself as a philosopher on iron, who speaks at length and occasionally quotes well-known thinkers. This is not always done accurately, but at least he sees things differently than most of his colleagues. In the summer he was allowed to give a one-hour speech at Sveriges Radio, the Swedish counterpart of NPO Radio1. In flowery sentences he told the listeners the story behind his two world titles, citing Aleksandr Solzhenitsyn among others.

He told about his year in the Swedish army. How he was physically squeezed during the tough practice missions. And that he noticed that the intrinsic motivation for the soldier’s existence was lacking. ‘A tired soldier is not a very good soldier, but a lazy soldier is worse. I became both.’

He wanted to skate again, but in his own way. “I know what you have to do to win at the Games. Not that I’ve done it, but I know where the bar is,” he said. ‘My idea is to approach skating in a completely different way.’

With the look at Patrick Roest

It is striking that Van der Poel, no matter how much wisdom he debits, is not aware of everything in speed skating. He knows nothing about Sven Kramer’s back problems or that except for his 10 kilometer record, all other current world records have been set in Salt Lake City. He is a loner and his main support in the sport seems to be Patrick Roest.

In his radio lecture, Roest was the only skater he mentioned, no fewer than sixteen times. As a child, he already looked up to his Dutch peer. Van der Poel was a good skater in Sweden, but when he took part in an international youth competition in Heerenveen as a 12-year-old, the Viking race, it became clear how little he was. He finished last, Roest was one of the best.

That is different now. Last season he overpowered Roest, who is sensitive to pressure, on the two longest distances. “There are people who say I got stuck in Patrick’s head last year. I don’t know if that’s true. I know he has a place in my heart.’

They are friends, he says. That is why he passionately encouraged Roest in Inzell at a training competition in which he took part. He even made a banner. “That wasn’t psychological warfare.” It was something between a joke and a token of appreciation. And he had checked beforehand to make sure Roest didn’t mind.

In the summer months, when Van der Poel has an unprecedentedly heavy training regime, Roest is on his mind. Especially during long bike rides. ‘It has rained, snowed and stormed. I’ve been hungry. Really, I’ve had a hard time. But the only reason I’m going through that struggle is because guys like him force me to.’

Last February, Van der Poel caused a sensation by running back to his hotel after the World Cup race in Thialf: 24 kilometers away. No other skater does such a thing, but he firmly believes in training hard and especially a lot.

This headstrong approach is not without risk. He should have known that then, between Heerenveen and Sneek. He suffered from hip pain for over a month. It’ll pass, he thought. But after a 95-kilometer run in April, it was clear it wouldn’t go away on its own. ‘I was injured. The training size was too big.’

That’s part of it. Sometimes you don’t know if you’re injured or just tired from your workouts, he says. ‘As a top athlete, your body always hurts, but I should have taken this much more seriously.’

Since then he no longer does running training, but cycled, sometimes for up to 24 hours in a row. Because it is necessary to push boundaries, even if things can go wrong. “It’s risky to be a top athlete. But if you don’t get to the edge, you’re guaranteed not to win.’

Two days after his successful World Cup, Van der Poel heard that his mother had cancer. She died in the spring. After her death, her best friend read to him his mother’s favorite Bible quote. He didn’t know it, didn’t know she had ever chosen it as a phrase that marked her outlook on life.

Van der Poel is not religious, but was touched because he sees his life and sport exactly the same. He therefore concluded his radio lecture with this: ‘God has not given us a spirit of cowardice, but a spirit of strength, love and discretion.’