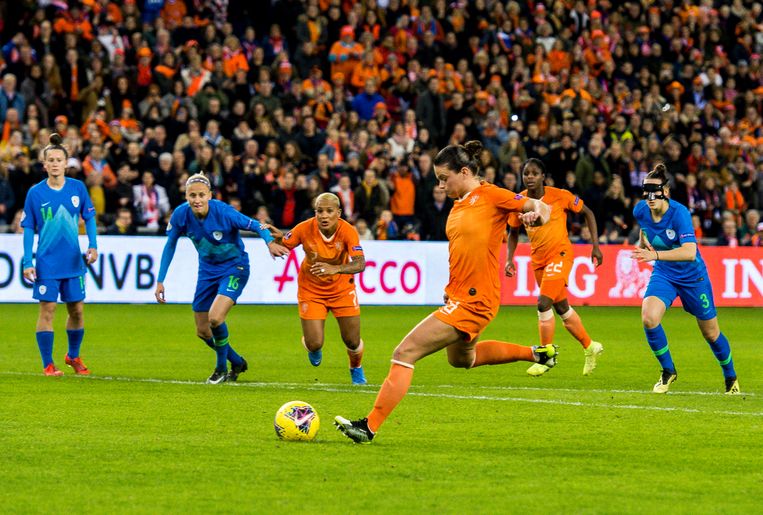 It’s May in Valerenga, Norway. Sherida Spitse looks out the window and thinks: what am I still doing here? ‘I no longer felt 100 percent that it was right. And then I have to do something about it. ‘

She is not the first top player to return to the premier league, in her case to Ajax. Mandy van den Berg (PSV), Sari van Veenendaal (PSV), Stefanie van der Gragt (Ajax) and Kika van Es (FC Twente), internationals or, in the case of Van den Berg, former international, went her for this year. Private reasons played a significant role in this. Van der Gragt also became a mother this month. Van Veenendaal, whose girlfriend lives in the Netherlands, said there is ‘more than football’. Van Es thought it was beautiful after a year of Everton and was happy to go home. The return has also become more attractive, because Ajax, PSV and FC Twente work with collective labor agreements and can offer internationals a reasonable wage.

Spitse sees the difference with the footballing man, for whom the millionaire status beckons when he signs for a top foreign club. When he returns, it is often to make a career decision, or to kick-start his career because he ended up on the couch. When traveling abroad, he may take family with him or hire staff to take care of children. The female pro is not a millionaire. On average, the woman talks about feelings more easily.

Lieke Martens is choked with homesickness for Barcelona, ​​but she persists because she wants to continue to play football in the European top. Spitse: ‘You also want to have money for your children and a future for your wife. Then you will see what is possible. I’m not saying I’ll never go abroad again, but right now I want to be with my family. ”

Midfielder Spitse made his debut in Orange at the age of sixteen and reaches an astronomical number of 180 international matches. She has a wonderful kicking technique, can move the game quickly and is a specialist in penalty kicks and free kicks. She scored 41 goals for the Orange squad, including ten in the current European Championship qualifying series, which ends next week with a game against Kosovo. First, on Friday in Breda, the World Cup final against the United States will be repeated. “We want to win now.”

When she talks about home, she means Emmen, while she plays football in Norway until the end of December. Her wife Jolien lives in Emmen, with the children Jens and Mila. In the first period of the corona time, the family spent some time together in Emmen. “I didn’t know what it was like to be home every day.”

When she returned to Valerenga, her wife and children stayed in Emmen. ‘That was the agreement. Jolien didn’t feel like going to Norway anymore. I also noticed it in the children. Jens, even though he is only 3.5 years old, said he had never been so happy when he was at the airport traveling to the Netherlands. It hurt when he said you should come back here. I don’t want to go to Norway anymore. My pleasure went away. Not in the game of football, but when I got home there was no one there. That makes it difficult. I spoke to them through Facetime. ‘

What is a contract still worth? ‘I make choices based on my feelings. We are very happy with it. When we went to Norway, Jolien also got a job right away. She had her own rhythm. She’s always been after me. She was also there for the children when we had them. I did too, but I could train and play my matches. She wanted something different with regard to the future. With all due respect, we are not millionaires. So we looked at what was the smart thing to do and where we could be happiest. That was and is not in Norway. I just want to keep playing at a level, and I think I can improve a few percent at Ajax. Jolien gets a job with children with a disability. Before that, she also studied. ‘

Financially it ‘comes down to about the same’. She is looking forward to Ajax’s football, more technical than the physical game in Norway. ‘It is great that quality is returning to the premier league. As a child I was already a supporter of Ajax. Back then it was not yet possible as a girl to join a club like Ajax. I think it’s cool that I’ll be able to wear that shirt soon. ‘ First, she plays a few more duels at Valerenga, including the cup final on December 13. ‘We’ll then go there one more time in a van. Then we throw all the stuff in and go home. ‘