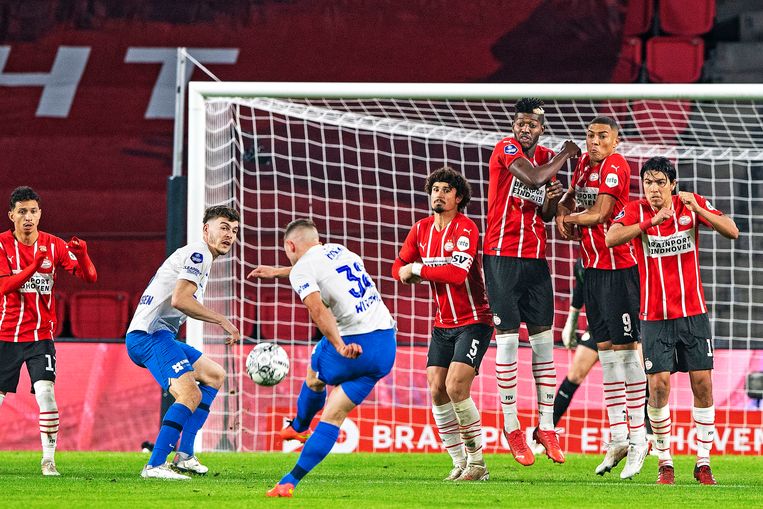 PSV player Ibrahim Sangaré has long been synonymous with division. If you looked at the defensive qualities of the physically strong midfielder, you saw the beauty of a pure ball taker. Anyone who wanted to see a refined playmaker in him was struck by the clumsy loss of the balls.

Gradually, the discussion about the added value of the 23-year-old Ivorian has died down. The controversy has faded into the background. More and more Sangaré is the player on whose broad shoulders the team of coach Roger Schmidt rests. Also in possession.

Against Vitesse (2-0 win), he gave PSV the lead on Saturday afternoon with a nice long shot. It was his fourth goal this season (three in the Eredivisie, one in the Europa League). By comparison, last season he scored once in all competitions. Sangaré is dominant this season without and with the ball.

See how he rules against Vitesse with his imposing figure in midfield, as if there are two or three Sangarés on the field. He wins ten of his fourteen personal duels and is the PSV player with the most tackles (4), interceptions (5) and conquests (11). Think of it as a kind of basic package that he can always fall back on.

This season, confidence has come to the fore. As a kind of designer, which many had not seen in him a year ago, when PSV had just taken over from the French Toulouse for nine million euros. Too often he lost simple balls in dangerous places, endangering his own team.

“I’ve always liked him, but it’s true that he has improved on the ball,” said Schmidt. “He makes better choices when he has won the ball. I thought he passed the balls too fast, now he keeps them longer and you can see how well he can dribble. He is almost unstoppable with the ball at his foot.’

Such a dribble was not necessary when the ball fell at his feet after almost twenty minutes on Saturday. Just outside the penalty area, he put the ball right once, to shoot it hard behind Vitesse goalkeeper Markus Schubert from the bounce. He was one of the better, if not the best man on the field.

That was Sangaré more than once this season. Earlier, Schmidt cited his midfielder as an example of a reliable player who achieves a consistent level, something some teammates have yet to learn. PSV is still too changeable, with the occasional slump and high peak, such as against Vitesse.

In the desolate setting of an empty Philips Stadium, the home team showed its best side, especially before the break. With the agile Mario Götze, Ritsu Doan, Armindo Bruma and Sangaré as the booster and playmaker, PSV always managed to separate the visitors. The highlight was Bruma’s goal after half an hour.

Doan and Götze combined smoothly on the right wing, after which the latter sent the ball with an arc to the head of Carlos Vinícius. The Brazilian striker prepared the ball for the incoming Bruma, who volleyed the ball into the intersection from the edge of the penalty area.

“I don’t like to single out one player from the opponent,” Vitesse coach Thomas Letch answered when asked how best to play Sangaré. ‘But if you look at PSV’s midfield, you see that those players are complementary to each other. Sangaré is a very different type of player than Götze and Doan.’

PSV does not have a second Sangaré in the selection. It saddles Schmidt with a problem in January, when he has to miss his mainstay because of the Africa Cup for a few weeks and matches against Ajax and AZ are on the program. “Ibrahim is a very important player, but we have more,” said Schmidt. The injured Cody Gakpo, Noni Madueke and Eran Zahavi were missing against Vitesse.

For example, Sangaré has become one of the most important players of PSV. A player, moreover, in whom Schmidt has unconditional confidence, whether there is discussion about his footballing qualities or not. “He has everything a central midfielder needs.”