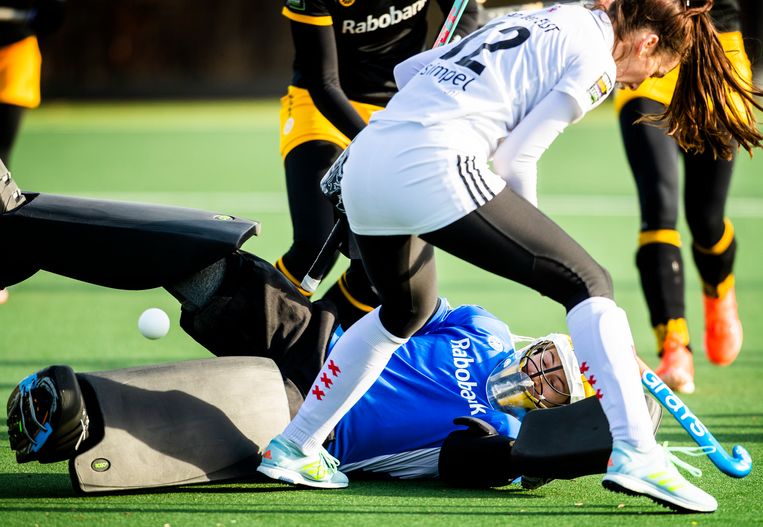 It was a freezing cold Sunday, for a royal place behind the stove. But in Den Bosch everything was done to give shape to the resumption of the hockey competition. The main field of the local hockey club, where the premier league topper between Den Bosch and Amsterdam was to be played, was partly frozen on Sunday morning.

Hockey players worked the artificial turf with sticks and brooms, a warm air blower was used, snow blades and shovels went from hand to hand with volunteers. Spray water could provide a solution if possible. The taps were opened. It led to a field that was better suited for ice hockey.

The technicians of Ziggo TV, who were busy providing a direct broadcast, did not trust it and were already moving the wires to Field 2. A little later they had to return to the main field. The chaotic start of the competition eventually took place with more than an hour delay on the side field, on the edge of the A2 motorway, Amsterdam-Maastricht. That field was better compared to the morning sun.

Ziggo, however, had finished moving and commentators John van Vliet and Tim Steens stood there on the sidelines fairly idle.

According to Steens, national coach Alyson Annan was particularly unlucky with the canceled broadcast. She thought she would watch the match between eight (Den Bosch) and seven (Amsterdam) internationals on channel 14 of her favorite sports channel. She had to do it, probably, with a meager live stream.

National coach Annan will not have watched the game with joy less than 200 days before the start of the Olympic Games. A slippery field, especially the lines were a problem when entered at speed, would pose a significant risk of injury. Eva de Goede, the captain of Amsterdam, stayed out of precaution with an injured back. She was wearing a nice ice cap. Maria Verschoor, another important international, fell on her side ugly, but could continue. Top dribbler Lidewij Welten of Den Bosch fought every duel she could enter into and stepped off the green carpet unharmed afterwards.

Annan will also not have become happy with the level of play of the two best clubs in the Netherlands and therefore also the best teams in the world according to experts. Sunday afternoon’s game, after three and a half months of forced rest, was minimally rusty. It showed a lot of carelessness. As a viewing game it was a drama. Welten, good for 84 goals in 215 international matches, was eventually released once for the Amsterdam goal, but like a quasi-novice she spooned the ball, with a 0-1 deficit, next to the goal. There was no abuse. Welten is too much respected for that for her contribution to the Bossche game.

A draw would have been more appropriate this afternoon, especially when the quality of that one Amsterdam hit was considered. Noor de Baat’s shot, in the third quarter, was touched by Margot van Geffen with the stick, after which goalie Josine Koning had no chance. In this eighth match of the season it was the first goal against the Bossche keeper.

Koning said afterwards that it had been a difficult game for her team. Resuming competition after more than three months of hiatus, go do it. ‘We tried to approach this match as a final. But that is difficult if you have not had the real build-up to such a match. ‘

Coach Raoul Ehren, who has been technically responsible for the often all-powerful women of Den Bosch since 2009, had a long circle conversation afterwards. Things had to be spoken and discussed immediately. Usance according to Koning.

The team, as a team, had had difficult months. The contacts, as natural as anything can and should have been, had been more difficult in corona times. Koning: ‘At the start of the corona crisis, if I may call it that, we did have collective contact with Teams of Zoom. But that didn’t work very well for us. We are more of a one-on-one contact. We are better at that. We started calling each other on our own initiative. Just check how the other is doing. You can also hear via the phone whether there is something wrong with a fellow player. ‘

The selection of Den Bosch is full of internationals, potentials and youth internationals. Hockey players with that status were allowed to train fully as designated top athletes (5,000 in the Netherlands) during the two months of total break. Three field players from Den Bosch fell out everywhere and had to pass quartets and sometimes even two of them to each other from a distance: Maartje Krekelaar, Pleun van der Plas and Imme van der Hoek.

Training has not been lacking for the country’s best hockey players in recent months. However, in competitions. That lack of competition rhythm, clearly visible on Sunday at the Oosterplas of Den Bosch, needs to be made up for at a rapid pace in the coming period. In addition to competition, there are the Pro League, the European Championship in their own country and finally the Olympic tournament in Tokyo. King, firmly: ‘I never thought of Tokyo at this match. We just wanted to win. ‘