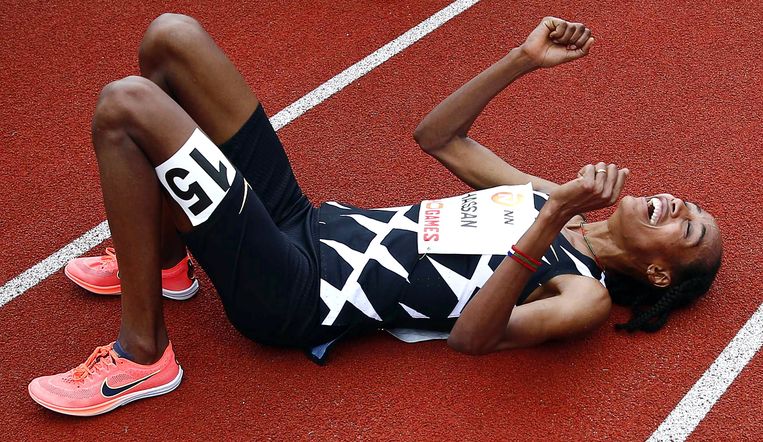 When Hassan spoke to the press barefoot in the mixed zone after her match, her manager Sander Ogink was approached by a jury member in the FBK stadium. He was carrying her Dragonfly-type spikes from Nike. “The judge took pictures of the shoes and wrote down information about the type. They are now on their way to the laboratory in Sweden’, says Ogink. According to Ogink, it is the first time that an athlete has to hand over shoes to World Athletics.

She walked in shoes that met all the rules, Ogink says. According to him, the type is just in the store. It’s the same shoe she wore last year. “There’s nothing new about it, just the color has changed.”

According to new rules of the World Athletics Federation, a maximum sole thickness of 25 millimeters is allowed for track competitions at distances from 800 meters. There may be one carbon plate in the sole. The spikes must not be longer than 9 millimeters and not thicker than 4 millimeters. Prototypes are prohibited. Also, no small adjustments should be made so that the shoes run better (or faster).

The World Athletics Federation introduced new rules in 2020 to stop further innovations after sports brand Nike revolutionized the marathon in 2017 with the arrival of the Vaporfly.

The new shoes had a springy effect due to a carbon plate in the sole in combination with special foam. The top times in the marathon moved about three minutes due to this development. It took other brands two years to develop similar shoes.

A similar revolution also took place on the track. After Hassan’s double world title at the World Athletics Championships in Doha in 2019 in the 1,500 and 10,000 meters, there was already wild speculation about her wonder slippers.

Hassan herself says that she doesn’t care much about which shoes she wears. The Ethiopian-born, who came to the Netherlands as a refugee and learned to run here, also has the world’s top times on the mile, the five kilometers on the road and the world hour record on the track.

The men’s world record in the 10,000 meters was already broken last year. Joshua Cheptegei from Uganda ran 26.11.00 more than six seconds faster on the revolutionary spikes in October than Kenenisa Bekele’s 15-year-old record, which stood at 26.17.53.

Hassan’s American coach, Tim Rowberry, does not deny the effect of the spikes. He doesn’t know exactly how many seconds it will give Hassan. ‘For Sifan it mainly helps mentally. If you know you’re walking in fast shoes, it feels better too.’

Ogink therefore does not expect any surprising results from the lab in Sweden. World Athletics has promised to return the shoes when the investigation is completed. Ogink: ‘But we don’t assume that she can still walk on it. We would like to have them, like a beautiful museum piece.’