PSV remains on the trail of the leaders Ajax and Vitesse in the Eredivisie. Partly thanks to a goal from Mario Götze, the Eindhoven team were 3-0 too strong for Willem II at home on Sunday, who played with ten men in the last half hour.

Philipp Max and Götze put PSV at 2-0 within 21 minutes. In Willem II another German played a negative leading role; Derrick Köhn got red in the second half. With one man more, Donyell Malen made the 3-0 for PSV in the final phase.

For the people of Eindhoven, it is the sixth victory in eight Eredivisie matches. The team of trainer Roger Schmidt is thus third, two points behind Ajax and Vitesse.

Willem II last managed to take a point in Eindhoven in 2000. The Tilburgers have been without a victory in the Eredivisie since 20 September and are in fourteenth place with five points. 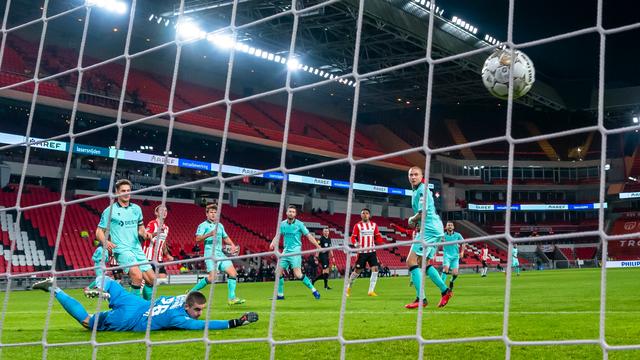 PSV, where captain Denzel Dumfries and Cody Gakpo returned after corona infections, played very strongly, especially in the first half hour. That had already led to opportunities for Malen and Eran Zahavi, before Max opened the score in the fourteenth minute.

Seven minutes later the other German scored in PSV’s starting line-up. After Dumfries pushed through at the back line – and very weakly defended Willem II’s Köhn – Götze was able to push the ball from close range into the far corner.

In the last fifteen minutes of the first half, Willem II became more threatening, but attempts by Ché Nunnely and Vangelis Pavlidis went high. Shortly after the break, Adrie Koster’s team became really dangerous, but PSV goalkeeper Yvon Mvogo had catlike saves on a bet by Mats Köhlert and the rebound by Nunnely. Direct red for Köhn after charge on Dumfries

On the other side, Malen got a big chance after a heel from Zahavi, but the striker ran into Brondeel. Shortly afterwards Willem II had to continue with ten men. Referee Allard Lindhout did not need a VAR to give direct red to Köhn, who planted his studs on Dumfries’ shin.

In the half hour that remained, the ten men of Willem II limited themselves to defending and did not really encourage PSV to achieve a monumental victory.

Zahavi and substitute Adrian Fein were close to a goal, but it fell only eight minutes before time. After a rush over the right flank, the indefatigable Dumfries was again the principal and Malen hit the far corner: 3-0.

After the convincing home win, a large part of the PSV selection will go out with the national teams. Trainer Schmidt, who has complained in recent days about the busy schedule for his corona virus-plagued selection, will hope that he will see all players healthy again in two weeks for the away match against FC Twente.