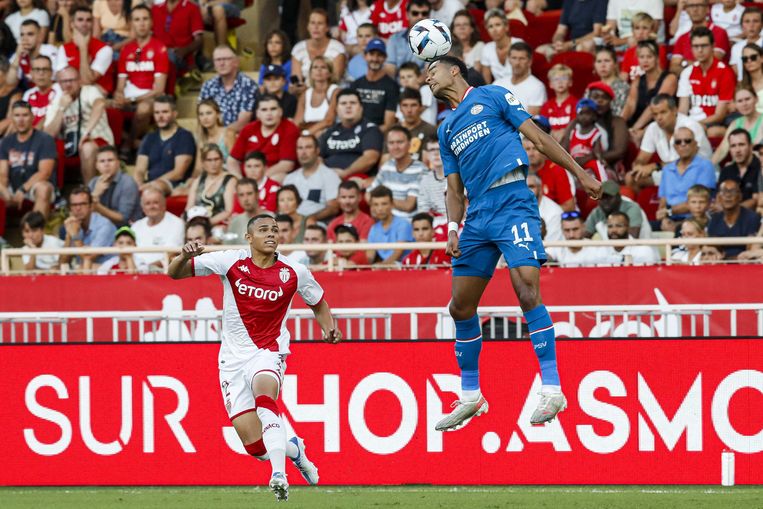 With his interceptions, passes, dueling power and dribbling, Ibrahim Sangaré was the star of the first leg against AS Monaco. But for a long time the question was how long PSV could still enjoy the qualities of the sought-after midfielder. A trio of wealthy Premier League clubs showed an above average interest in the player who was allowed to leave for a limited amount of 37 million euros.

Last weekend, all uncertainty came to an end, when PSV announced that the 24-year-old Ivorian has extended his (improved) contract by two years until 2027. And more importantly: the limited transfer fee of 37 million has been frozen until the summer of 2023. Anyone who still wants to steal Sangaré from Eindhoven this season must arrive at technical director John de Jong with an astronomical amount.

The powerhouse is an important link in the pimped PSV of trainer Ruud van Nistelrooij. The team imploded when last week in Monaco he had to leave injured fifteen minutes before the end. “I want to become champion with PSV and reach the Champions League,” he said when signing his new contract.

No player is a guarantee for a certain number of goals. But at PSV, productivity seems to be fine. Judging by the past few seasons, Van Nistelrooij’s team has a handful of players who score easily.

Just take Luuk de Jong and Guus Til, who were recruited this summer. With 28 goals, De Jong ended his first period at PSV in 2019 as joint top scorer in the Eredivisie. Til’s 21 goals (all competitions) formed an important pillar of Feyenoord’s success last season.

Should the duo lack form, there is still the constant danger from the left that is called Cody Gakpo. He scored twelve times last season, while Johan Bakayoko became the top scorer at Jong PSV with seventeen goals. And midfielder Joey Veerman, who was accurate in Monaco, also expects to be able to cheer with some regularity: “Against the ten goals it should be possible,” he said in preparation for the game. Eindhovens Dagblad.

With Ruud van Nistelrooij as Roger Schmidt’s successor, PSV not only broke new ground in the tactical field. The former striker also focuses more on his own youth players than his German predecessor did.

That is not surprising, since Van Nistelrooij was the trainer of Jong PSV last season. There he convinced the PSV leadership that talents can develop well under him. He transferred Johan Bakayoko, Fredrik Oppegard and Ismael Saibari to the first team, among others, and does not hesitate to give them, like the young Richard Ledezma, playing minutes.

Saibari turned out to be a surprise for PSV in the preparation. It is likely that the 21-year-old Moroccan Spaniard will start again in the base in the home game against Monaco, as a replacement for the long-term injured Noni Madueke. ‘Some boys are doing surprisingly well’, said Van Nistelrooij during the preparation about the talents, with which he referred to Saibari, among other things.

The 5-3 victory against Ajax in the Johan Cruijff Scale more than a week ago gave a nice insight into the strengths and weaknesses of PSV. The team proved that it scored easily, but showed its vulnerable side defensively. “Making five is great, but three against is too much,” said Van Nistelrooij.

During his presentation as PSV trainer, he emphasized that the number of goals against must be reduced. Under Roger Schmidt, PSV conceded 42 goals in the league last season. In comparison: Ajax against 19. “Historically, the number of goals conceded is often decisive in the battle for the title,” says Van Nistelrooij.

The number of goals conceded is also a concern this season. In nine games (including practice matches), the opponent has already scored fourteen times against PSV. In Monaco, Van Nistelrooij’s team looked solid for half, but after the break it gave away the chances too easily, resulting in the late equalizer (1-1).

De Jong and Til are praised for their head strength, physical constitution, nose for the goal and the ability to keep going for ninety minutes. The disadvantage is that there is little creativity in the striker and attacking midfielder. Do not expect flashy individual actions or split openings from the duo.

In the first game against Monaco, PSV’s ingenuity had to come mainly through Gakpo’s dribbles – who did not play his best game – and Veerman’s passing. With his kicking technique, the midfielder is the one who has to provide the much-needed variation and surprise in PSV’s attacking game.

If Van Nistelrooij needs more footballing ability in his team, Xavi Simons could be a good alternative for Til. With his dribbling, technical baggage and smart passes, the 19-year-old talent proved to be able to add something to PSV’s game last weekend against Emmen. In addition, he showed that he was a very different type from his competitor five years older.

In Eindhoven, the sky turned pretty blue for PSV this summer, although there is still a dark cloud hanging over the Philips Stadium with the possible departure of Gakpo. “If we make it to the group stage of the Champions League, it is more likely that I stay,” said the attacker after the simple victory over Emmen.

The question is whether the club also wants to wait that long. If PSV beat Monaco and make it to the play-offs of the Champions League, it will only know on 24 August whether it qualifies for the main tournament. A week later, the transfer market closes, while PSV would like to find a replacement if the self-trained player leaves.

PSV would prefer clarity from Gakpo as soon as possible, but the club also knows that the panels can be moved until the end of August. The fans, on the other hand, make no mistake about it. “Jalalala, Cody must stay” has been rolling off the stands for weeks.