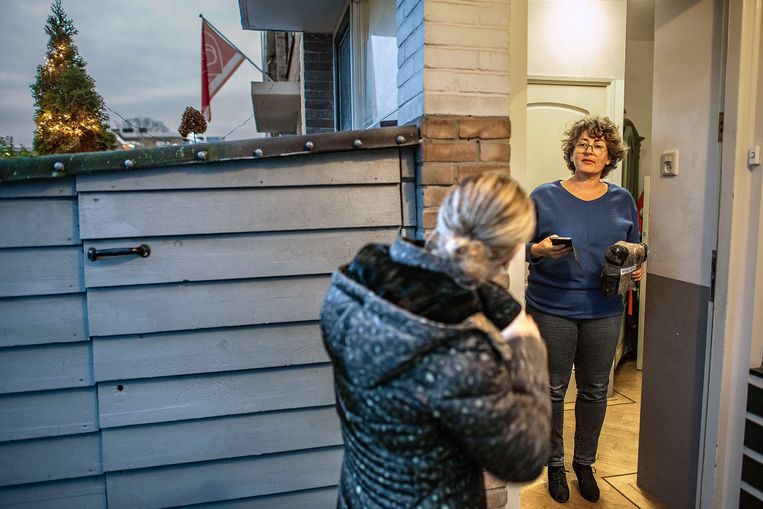 It looks a bit like St. Maarten, but for adults. Instead of sweets to singing neighborhood children, Anouk Neeter (48) hands out stacks of packages to neighbors – on presentation of their ID. It is half past four in the afternoon, rush hour, and the Alkmaar shuttles back and forth between her hall closet full of parcels and the neighbors at the front door who receive them beaming.

As an official collection point for Homerr, a parcel delivery service that uses a network of private individuals in addition to the usual collection points at shops, Neeter, together with her husband and son, deserves ‘a nice extra’ by receiving and delivering parcels for local residents.

Would you rather listen to this article? Below is the version read by Blendle.

Now that parcel delivery services are experiencing unprecedented crowds and hundreds of parcel point stores are closed, the work brings the family something else: great gratitude from their neighbors. They have heard it more often in recent days, says Marco Schouter (49), Neeter’s husband, when he is hooked up a little later. “We are so glad you are still open.” He shrugs and looks at his wife. ‘We think: well, we are at home after all. Little effort. ‘

The latter is not how PostNL would like to characterize these weeks. The company currently delivers a staggering 1.7 million parcels per day. By way of comparison: last year around the holidays, the 1.5 million parcels were ticked ‘every now and then’. ‘Our employees now deliver a top performance every day,’ says spokesperson Dagna Hoogkamer. ‘We have scaled up our capacity by 90 percent compared to the beginning of this year. We cannot and do not want more than this. The elastic is taut. ‘

The huge crowds are the result of the holidays and the closure of non-essential stores. This week, the closure of some of the parcel points was added to that. Hundreds of stores such as Ako, Bruna and Primera decided to close their stores from Monday. The fact that they were allowed to accept and distribute parcels, but were not allowed to sell Christmas cards or state lottery tickets, led to too many ‘altercations’ with customers, according to the shops. Moreover, according to the stores, the parcels yield too little to stay open for.

For PostNL, this means that instead of approximately 3,750 there are now around 3,000 parcel points open. To keep the parcel avalanche somewhat manageable, the company is asking consumers to keep their return shipments at home until January 7. It has been agreed with retail chains that they will extend the return period. Online stores also have a temporary maximum number of parcels that they may deliver daily.

Since Monday, PostNL has also set up about twenty temporary collection points in the form of delivery vans, which are parked near supermarkets or hardware stores. They have to relieve the burden on regular parcel points and give consumers the opportunity to still put their last Christmas presents on the bus.

The parcel hiccups largely ignore Anouk Neeter’s terraced house. Certainly, with the counter at 200 parcels, December is her busiest month so far. But she only started in September, “so it may well be because people are increasingly able to find us,” it sounds sober.

Neeter is a financial assistant in youth care. Earlier this year, when she saw her hours decrease due to cutbacks, she decided to sign up as a parcel point. Now, a bag of parcels is delivered and picked up twice a week – neighbors can also hand in their returns at Neeter. On weekdays, neighbors between four and eight are allowed to pick up their purchases.

She won’t get rich from the 35 cents per package Neeter receives from Homerr. But she likes the job: “You talk to someone again.” And if all goes well, she can make it a nice trip with her husband and son next year. And if things really go well? “Then we’ll go to the campsite.”

There are still doubts in Alkmaar, voor Mark-Jan Pieterse, co-founder of Homerr, is certain that the parcel pressure has also reached his company. “We’ve been three times as busy in recent days as we were in November.”

Homerr, which wants to be a ‘more sustainable and social’ alternative to regular parcel services, only delivers from parcel point to parcel point – and not at home. That saves environmentally polluting rides. At the start of the corona crisis, this way of working seemed to be a disadvantage, says Pieterse. “Then many people did not dare to leave.” But now that hundreds of parcel points have been closed, it appears to be the advantage. With many private individuals, the vast majority of Homerr’s network remains open.

The Alkmaar parcel point of Neeter and her family is still a modest point with just under 200 parcels this month, says Pieterse. ‘We have addresses where 500 to 1,000 parcels per month go through.’

If it were up to Neeter, that will soon change. Soon she will also process parcels from DHL. “They deliver daily, with about fifty a day.” Well, as long as she works from home herself and her husband and son can help out every now and then, it’s perfectly doable, Neeter expects. She only sees a small bump in the road: where does she leave all those parcels? “I’ll have to reorganize the hall closet.”

Post NL says it does not see a significant increase in the number of parcel deliverers being robbed. ‘But unfortunately it does happen sometimes,’ says spokesman Dagna Hoogkamer. And anyway, there is one too many. These are traumatic experiences for our employees. ‘ The police do not see the number of robberies increasing either. (Maud Effting)